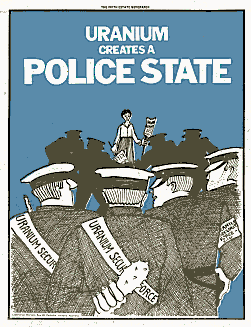 The article which follows was originally produced as a leaflet and distributed at the Monroe anti-nuke demonstration on June 2nd, 1979. The Monroe demo was itself even more frustrating than the Midland gathering, and has solidified for many of us involved in it our determination to undertake our own anti-nuke activities in our communities, outside of the context of the increasingly paralytic mass organizations.

Allors!—as France’s leading Anarchist & Public Enemy Number One, I wish to offer my congratulations on your fine paper. As a revenue generating device, may I suggest an idea for a t-shirt: on the front a picture of padre Jim Jones w/logo, “He died for your sins” & on the back the picture of Sid Vicious with logo, “I died for mine.”

The ambush-style shooting death of an anti-nuclear activist in Houston, in April, has sent waves of alarm through the Texas anti-nuclear community. The victim of the assault was 28-year-old Michael Eakin, who was formerly the editor of the University of Texas newspaper and founder of the Austin Sun, a weekly alternative paper.

In a victory for Russ Little, the California Supreme Court has let stand a lower court order reversing his conviction for the 1973 SLA assassination of an Oakland, California school official.

Little should be back in court for re-trial by this Fall setting the stage for his eventual release if found innocent at that proceeding. However, at the same time, the Court refused to hear the appeal in the same case of Joe Remiro whose conviction was left standing by the lower court.

Abbie Hoffman, fugitive Yippie, has been on the lam for over three years following a New York City cocaine deal set-up by the police. Abbie has had plastic surgery to alter his appearance and has managed to elude the authorities even while popping up at protest demonstrations, rallies held in his behalf and he once even appeared as the guest chef on a Toronto TV cooking program.

“Without government life is nasty, brutish and short.”

Every person gazing even casually at the sordid history of government realizes that the Hobbesian dictum is nonsense and, in fact, just the opposite is true: with government, humanity has thusly had its life defined.

Viewing the organized political state as the culprit in human affairs for the presence of universal misery is standard fare for the anarchist and libertarian tradition and as a theory is not without merit as far as it goes. Certainly, other attempts historically to locate the culprit in evil spirits, the Devil, human nature or even capitalism, are much more shortsighted as they fail to deliver an explanation of the daily mechanism through which people have been subjugated during the epoch of Civilization.

Marshall Sahlins
The Original Affluent Society How we used to live before the rise of the state, technology and government

The following essay, “The Original Affluent Society,” is written by Marshall Sahlins and was taken from the book Stone Age Economics published by Aldine-Atherton, Inc. We have liberally edited Sahlins’ important investigation into societies prior to the rise of what we generously call “civilization” but hope we have maintained the author’s clarity and purpose. We would suggest a reading of the original piece if at all possible. 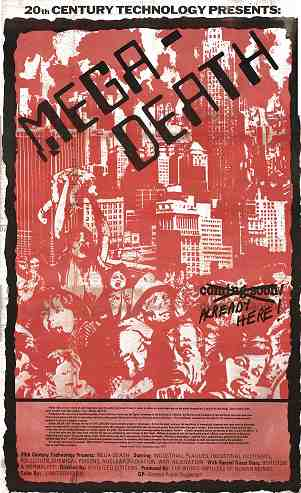 Rarely does a horror movie of such magnitude reach the public, but when it does, it seems to obtain an unshakable grip on the public imagination, if not on its very being. Such a movie is the latest product from 20th Century Tech.—MEGA-DEATH’

The FE Bookstore is located in the same place as the Fifth Estate and can be found at 4403 Second Ave., Detroit—telephone (313) 831–6800. The hours that we’re open vary quite a bit, so it’s always best that you give us a ring before coming down.

HOW TO ORDER BY MAIL:

1) List the title(s) of the book, amount wanted and price of each;

Foucault insists that “delinquency, controlled illegality, is an agent for the illegality of the dominant groups” (p.279). Delinquency is a uniquely modern development, which first materialized in the nineteenth century. As Foucault delineates the process, tine Enlightenment reforms of the penal code and prison conditions were adapted to the new conditions of early industrial capitalism. Delinquency, then, is depoliticized crime, distinct from popular illegalities such as peasant uprisings, sans-culotte direct democracy, Luddism, strikes, insurrections and so on. The reformed penal code and the new criminal justice bureaucracy (police, courts, lawyers, prisons) created, in the nineteenth century, a circumscribed zone of illegality that was easily controlled and which posed no threat to the ruling class. On the contrary, delinquency became one of the principal modes by which the bourgeois regime maintained its legitimacy as a ruling class.

Fifth Estate Collective
Bits of the world in brief

The Epilepsy Foundation of America is warning that the simple act of watching television may trigger seizures in nearly a third of all individuals with epilepsy. The Washington-based organization says there is substantial scientific data indicating that the moving images of lights and shadows on TV screens can provoke the seizures.

On May 9, 1973, three prisoners of Washington State Penitentiary, Carl Harp, Shane Green and Clyde Washburn seized the Classification and Parole Building with ten hostages, and held it nonviolently for 12 hours. During that time they were in constant communication by phone and bullhorn with media, prisoners and people outside to whom they talked about maltreatment and cruel conditions inside the prison.

The positioning of this article in the back pages in no way reflects our assessment of the gravity of the situation described herein. We extend our full solidarity to these comrades, victimized for committing no “crime” other than to cross a point of land arbitrarily designated as a “border” by those who we hold in utter contempt. It is small acts like this, carried out by cretinous functionaries of the State, that further steels our resolve to work actively for its total elimination.

Though we do not accept commercial advertising, this Unclassified ad space is free for our readers’ use. We do not accept ads over the telephone, so please send your ads in writing to our office at: 4403 Second Ave., Detroit, Michigan 48201.

PARTISAN PRESS is a new libertarian publishing project in Seattle. We are currently preparing several works for publication, including THE CHRISTIE FILE, the autobiography of British anarchist Stuart Christie; THE PRACTICE OF UTOPIA, the English translation of Louis Mercier Vega’s last book; and an as-yet untitled anthology on Italian insurgency, 1976–78. If you have a manuscript relating to libertarian themes (fiction is also welcome), we’d like to see it; and of course, donations toward the publication of our first titles will be gratefully accepted. Hoping to hear from you: Partisan Press, Box 2193 Seattle WA 98111.

Example: “he is merely a barbarian on the loose in a museum” (Yvor Winters).

Civilization: 1. The process of civilizing or becoming civilized. 2. To civilize; to bring out of a condition of savagery or barbarism; to better the habits or manners of; refine.