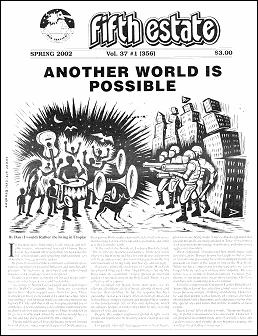 From a talk given at the Fourth Annual Montreal Anarchist Bookfair, May 18, 2003

Think back to the Great Depression and World War II and envision the odd alliances that developed around the world in the face of capitalist crisis and rising fascism: the Hitler-Stalin pact, for instance, or syndicalist support for Mussolini. Or, imagine militant anti-fascists in the underground resistance (often dominated by Stalinists) building ties with US and British military forces. Radicals in North America split between those who encouraged enrollment in the fight against fascism and those who did time in prison for refusing the draft. Think of the strange permutations of Peronism in Argentina, the “green” and “left” wings of the Nazi Party, the failure of the European left in the face of Italian occupation in Ethiopia, or the twists and turns of East Asian resistance to Japanese occupation.