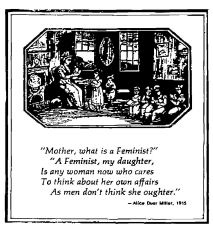 “Mother, what is a feminist?”
“A feminist, my daughter,
Is any woman now who cares
To think about her own affairs
As men don’t think she oughter.”
—Alice Duer Miller, 1915

On March 8 in 1857 hundreds of women textile workers marched from a poor, working-class district on the Lower East Side of New York City to a wealthy area nearby. They were demonstrating against poor working conditions, low wages, and a 60-hour work week, and demanding equality for all women. They were dispersed by the police who “were just protecting property.” Many women were trampled and arrested.

In 1910, because of these demonstrations, an International Socialist Congress, meeting in Denmark, proclaimed March 8th as International Women’s Day, to commemorate women and their struggles.

In 1917, in spectacular celebration of International Women’s Day, women textile workers, exhausted by long hours spent over spinning machines, angered by endless bread lines, and embittered by a war that was killing their husbands, initiated a strike of 90,000 workers that sparked the Russian Revolution.

Until recently, March 8th has been celebrated mostly in socialist countries. Now people in the U.S. and many other countries have begun to recognize this day, too. Last year the Tupamaros, an Uruguayan guerrilla group of men and women, freed 13 women prisoners on March 8th. They disguised themselves as medical personnel to gain entrance to a guarded church, where the women had been taken for services, and took the women out with them!

For the last few years, on International Women’s Day, women in the United States have participated in rallies, radio programs, media shows, and marches. Activities have focused on demands for free, legal abortions; free child care; better pay and working conditions; freedom of women political prisoners; and an end to all sexist practices.

The movement for the liberation of women is growing rapidly. This year many more women will be celebrating March 8th.