Army Crumbling in Portugal
Crisis of authority for bourgeoisie

Activity of the Councils 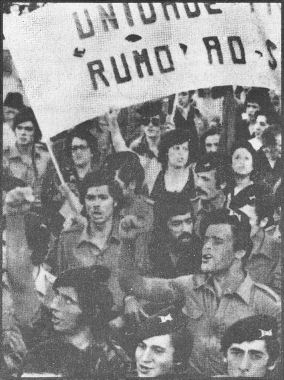 The rule of Capital continues to erode in Portugal as the increased activity of rank-and-file soldiers, workers and peasants comes into increasing conflict with the Sixth Provisional military government.

Perhaps the most dramatic example of the growing instability is the rebelliousness of the army troops and lower ranking officers. As has been well reported in the capitalist press, example after example of troops leading and taking part in mass demonstrations, giving arms to workers and “left” parties, and their refusal to obey government orders has precipitated the latest crisis for the moderate government of Premier Pinheiro Azevedo.

An order for civilians to turn in all unauthorized weapons was issued by President Francisco Gomez in his capacity as armed forces Chief of Staff on October 17. The military estimates that upwards of 20,000 stolen weapons are now in the hands of leftists.

Most of the arms have been given to workers and leftist parties by soldiers combined into the recently formed Soldiers United for Victory (SUV) who have issued a manifesto calling for “the destruction of the bourgeois army.” At the end of September a mass demonstration in Lisbon was joined by 15,000 soldiers in uniform, including many members of SUV, who constituted a quarter of all the soldiers in Portugal.

This assault on the army by the very troops which are supposed to comprise the armed force of the capitalist state is a situation which no bourgeoisie can tolerate.

Incidents such as the mutiny of troops sent to wrest control of Lisbon’s radio and TV stations away from the workers who controlled them on September 29 and the week-long occupation of a key artillery base in Oporto will probably propel the Portuguese military leaders to action.

The campaign by the unelected military regime of the Armed Forces Movement to restore “Discipline, discipline,” as a Socialist Party-backed, pro-government rally chanted several weeks ago, has exposed the AFM as a major bulwark of Portuguese capitalism and not as a weapon of a revolution as the reactionary Portuguese Communist Party (PCP) contends.

The machinations of the “left” wing parties, from the CIA-financed Socialist Party to the militant activities of the smaller parties of the ultra-left, have been well reported on in the daily press and weekly news magazines.

Another not so obvious source of information on the Portuguese situation is the multitude of U.S. “left” newspapers who all trumpet for their particular view of events and herald the party or grouping which they most support as the only salvation for the proletariat.

In between the “advice” to Portuguese workers and the denunciations of all other groups, comes a fair amount of information, since most of the papers have sent correspondents to Portugal to observe events first-hand. It is from these small journals that much of the information about the formation of workers councils and agricultural collectives can be gleaned, but still their reports must be taken cautiously.

Many of these formations by workers and peasants developed spontaneously with factories and other industrial concerns being self-managed in the Lisbon area for over a year, and much land in the agricultural South being seized by landless peasants and run collectively.

This self-activity on the part of workers should be the mechanism through which an authentic communist revolution occurs, but unfortunately many sections of the Portuguese working class see their fate tied to that of any number of political parties from the PCP to the almost anarchist-sounding Proletarian Revolutionary Party-Revolutionary Brigades (PRP-BR). The seizure of the power of the state by the PCP would spell the immediate ushering in of an authoritarian, centralized state capitalism, and the immediate destruction of all organs of working class democracy--the councils.

Other groups like the PRP-BR are more deceptive. They correctly call for the arming of workers, for the formation of workers councils, for the destruction of the army and for an armed insurrection to abolish capitalism. Like all leninist parties, however, they call for the seizure of state power (by their party of course), but even there, the rhetoric is good.

In the same issue of Time which interviewed Premier Azevedo, PRP leader Isabel Do Carmo said, “We must have either pure socialism or we will go back to fascism. The workers in Portugal have shown that they do not want central power or a central authority.” Good words, but this is nothing new.

Never in history have revolutionary workers ever demanded “central authority”--it has always been imposed upon them by groups like the PRP which voice the popular slogans of the people (“All Power to the Soviets”--Lenin) and then install themselves in power and employ all of the techniques ascribed above to the Portuguese CP.

Activity of the Councils

Another problem is that although many key enterprises in Portugal are run by workers councils or committees, all the aspects of the capitalist market still predominate in economic life since the rule of Capital has not yet been toppled. In some cases this has been cynically used by the PCP to urge workers to increase their output since now they, the workers, “control” production.

Most of the activity of the councils has been in the areas of eliminating pay differentials, generally improving their lot as wage workers. Also, because of the chaotic state of the Portuguese economy, workers in failing enterprises have been demanding nationalization by the government in order to save their jobs. This, if accomplished, will only set the stage for the ushering in of state capitalism, a la Yugoslavia.

A communist revolution is not just the trading off of a private boss for a state boss, but means the concrete end of wage labor, the end of production of commodities for exchange, and the abolition of all mediating agencies such as political parties or the State.

The developments in Portugal should sharpen greatly in the weeks to come and political analyses written from the comfort of a newspaper office are easy to come by. The real questions will be settled by the workers and peasants of Portugal, but observation gives us some insight into what revolution can be here.