Lording in the Corridor
Save Your Rent 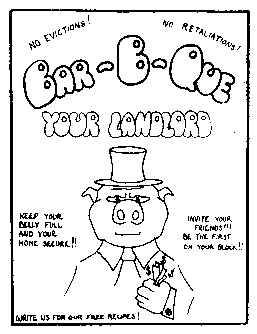 Ten years ago, the number of residents in the Cass Corridor, bounded by Adams, Cass, Penn Central RR, and the John Lodge X-Way, numbered well over two hundred thousand. Today that number has dwindled to under ninety thousand. Most of the people have relocated in other parts of Detroit, buying up property abandoned by the flight of middle and low income whites to the suburbs. This relocation, usually accounted for along the lines of racial prejudice, stems as much from the nature of real estate values as simple racial realignment.

Beginning with urban renewal programs and extending to the expansion of Wayne State University, there developed a rapid absorption of cheap property from the hands of low-income people into the hands of highly trained investors who foresaw the redevelopment of the whole Cass Corridor from a low-income (and low-profit) area, to a highly profitable commercial area connecting the Downtown and New Center commercial districts.

Both local and absentee landlords have been sucking dry the energies of the people in this area ever since the establishment of commercial interests superseded the interests of Detroit’s indigenous inhabitants. The continuation of this trend will only result in the complete destruction of what social community there is left. The trend toward high-rises, super-structure parking lots, and deserted malls watched over by vigilant cameras will continue unless the people who presently live here come together collectively and put a stop to their collective exploitation.

I, the renter, agree to submit to the lease agreement and regulations of my landlord, as written by my landlord and legally enforced by the authorities of the state. I agree to pay my rent and help sustain the landlord’s existence. Should the landlord decide to evict me, I agree to pay all legal fees, should any be incurred in the eviction process. I agree, I submit, I am a commodity.

The signing of any landlord-tenant lease agreement by a tenant is essentially the tenant’s freely made decision to accept the terms of the above paragraph. In exchange for a place to live, the tenant agrees to the conditions of the rent agreement as determined by the landlord. There is no collective bargaining. Since the landlord owns the property, whether he lives on it or not, he has the legal right to capitalize on its use by other people.

The landlord has one singular interest in this enterprise, that is to extract the greatest amount of profit with the least amount of expenses. Housing conditions, property maintenance and upkeep are therefore kept to a minimum, while the rent charged is kept at a maximum as determined by the supply and demand for housing in the area.

For the greedy landlord it is advantageous to gain control of as many buildings in a given area as possible. This avoids competition with other landlords, allows price-fixing, reduces maintenance costs, and keeps sub-standard housing productive, especially in areas where the demand for housing exceeds the available supply.

A quick check at the county assessor’s office clearly indicates that most every building and now empty lot in the area is non-locally owned. The taxes on these properties are being paid by owners who spread from Detroit’s own suburbs all the way to Texas. Management companies such as Renaissance, Abodes and Korn Real estate act as middle interest groups, hiding real ownership, collecting rent centrally and keeping tenants minimally satisfied.

How many times each building has already paid for itself through the labor of its tenants is impossible to say without checking through the history of each building. Some buildings pay for themselves annually. The profits are enormous, and they all go to benefit people far removed from the real interests of the community itself.

A property check on any building will more than likely reveal housing code violations that go back years. Rarely does a landlord invest tenant money or his own for the maintenance of the tenant’s living conditions. And when he does it is only upon prolonged tenant protest.

Unfortunately, property mis-maintenance is only one of the many offenses landlords generally practice in their dominion over tenants’ rights. It is common practice by landlords in the Corridor to openly discriminate amongst potential tenants. Families, single women with children, and ADC and welfare recipients are often rejected outrightly.

It is also common practice to hire managers and maintenance people in exchange only for living quarters, and to put the bulk of management and maintenance responsibility on these same people economically forced to accept the arrangement but rarely able or qualified in their capability to meet this responsibility. Such people inevitably separate and buffer tenants from their landlords and management companies. It is also known that one local landlord practices a policy of regulating traffic in heroin by refusing addicts rental in one area while at the same time offering a place on a poorer block a few streets away. Personal stories of tenant mistreatment go on and on. There is no end.

As long as tenants allow themselves to be exploited, landlords and money-conscious investors will amicably comply. Ultimately, only by the abolition of rent can the tenant realize the end of landlord domination; this necessarily implies the overthrow of all capitalist social relations.

(Though we hardly endorse reformist proposals for extending the life of Capital, we do feel that as long as we must live under its domination it behooves us to know and demand all of our rights under bourgeois law. The United Community Coalition at 3901 Cass (831–3795) has information and counseling services for anyone who has questions about landlord problems, rent strikes or any other form of legal resistance.)

For the tenant or prospective tenant, all this forms the basis of an enduringly nasty realization that strident, boorish arrogance exerts a significant influence which, though he despises it, he is compelled to heed. The freedom-destroying and humiliating nature of this one-sided dealing is plain.

The prospective tenant is moved by considerations of his local exigencies, and limitations of available time in search of an acceptable “home”, or rather dwelling. The landlord is complacent and uncaring about any such problems. The landlord can demand impossible terms, and will do so, such as first and last month’s rent in advance, plus considerable deposits, in the certain knowledge that somewhere, someone will be able to afford his terms.

That this should lead to indolence, and consequently to stupidity, on the part of landlords, is not difficult to apprehend. For the landlord, all healthy striving has now ceased; like a sluggish python digesting a deer, the propertied class swells and snores, its pudgy thumbs hooked in rolls of foul-smelling, unwashed fat. Unearned incomes breed complacency; complacency breeds mental stultification; and this last evokes greed for--more unearned income.

Yes this belching, imaginationless nobody professes to “own “ the place where the tenant actually lives! Can anything more absurd than this be conceived of? As if “ownership” of anything except for use had the slightest validity or defensibility! And since greed calls the shots, rental properties, homes, apartments, etc. are almost universally poorly-appointed, dreary and expensive.

Plainly the degrading nature of this interaction infects the sensibility of the landlord, and inflames or dulls the tenant. A poor quality of men and women and children in the world is the result.

How can there be responsible, mature, freedom-loving individuals when the world is divided up among those who, degradingly to themselves, live from the rents paid by others, and those who are forced to pay these rents and to tolerate the snooping, prying, laying down of arbitrary conditions, invasions of privacy, and frustration which are inevitable hallmarks of this practice?

Psychologically, this leads to a poor image of self among tenants, while landlords are automatically in a position of some power, which corrupts somewhat. Yes, an exceptional person here and there contrives to retain a modicum of decency even while acting as a landlord, but even still the master-slave relationship is present as at least an undercurrent, and its erosive ebb gnaws faintly but surely at the possible friendship and spontaneity that might otherwise exist unchecked between the two parties. There is nothing good that can be said about this practice whereby some own, and others rent.