While not nearly as exciting as a riot, and perhaps lacking the dignity of a well-executed bank robbery, the Fifth Estate’s 10th anniversary party was still a hell-raising triumph of communal insanity. 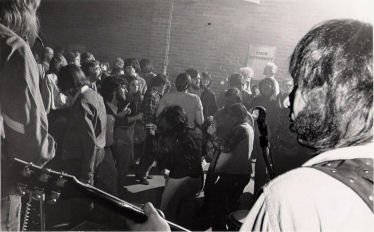 Fifth Estate 10th anniversary revelers boogie while Ted Lucas and Bill Hidgeson play (photo Millard Berry). The Fifth Estate’s sadly depleted coffers received a much-needed boost from the benefit; with total receipts of $704 and costs of $354 ($194 for beer, $80 for the hall, $60 for leaflets and mailings and $20 for incidentals) we came out ahead about $350, a sum which should keep our heads above water for at least a couple more issues. Many thanks again to all who took part, hope to see you at the next one.

Ten years of creative (sometimes) struggle toward that elusively-marvelous future of a liberated humanity was capped by this party on December 6th and celebrated by 400 of “the cream of the Detroit crazies”. No big speeches were made at Formerly Alvin’s Deli on the stage which was thrown together one day before the blast. The message was in the music, in the plays, and in the faces and dancing feet of the celebrants. It was the passion of ordinary people trying to push their lives beyond the hideous limits of ordinary reality.

“You could feel it down the street,” musician Ted Lucas said afterwards.

The festivities began at 8:30, and within a few hours, four kegs of beer were virtually inhaled. “It was amazing that the kegs themselves weren’t inhaled,” said a startled organizer of the party.

Another fourteen cases were quickly imported to see the party out to its dizzying conclusion at 4:30 am, when the last music faded and the still-bubbling festives crept into the night seeking rest or maybe even further expressions of their lust.

It was the Mugs band which started things out with a funky rhythm and blues act that established a pace which never let up. They had a solid rhythm thing going, and worked out a lot of old Motown material backed by conga drums.

Next up, the Acme Theatrical Agency proved beyond any doubt that their brand of anarcho-absurdist social satire can seize even a crowd of beer-drenched dope asphyxiates and get them to hold it down for some perceptive and uproariously funny skits.

Characterization is this group’s strength, and they came through once again with an assortment of motley figures engaged in everything from “Name That Drug” contests to avoiding both work and the bureaucrats who insist on finding it. As usual, they get better every time.

Following the Theatrical Agency was a band of indigenous musicians who, like stray cats uniting in some sly permutations of mischief, got together just for that night to see what could be done. Long-time FE friends, Ted Lucas, Dave Opatik and Bill Hodgeson, (who is, by the way, just about one of the best damn rock guitarists in Detroit) gathered up some slinky rock and rollers and, with Teddy’s close collaborator “Doctor Don” Hill on congas, knocked out some dancing music which set the night on fire.

As a member of the group which had to come on next, I was honestly afraid that the crowd wouldn’t let them stop, or that we would pale by comparison.

But coming on next, the Primitive Lust Theatre group had one ace up its sleeve. After much coaxing and a considerable bribe, we got a worker at a local cemetery to allow us in at night with shovels, where we dug up Dragonis Durrutti, the legendary werewolf; and under hypnotic control, got him to perform as a wrestler. He had to fight (go ahead and laugh) the Iron Nun.

This went over well and is our favorite because it gets the crowd riled-up and they get to find out what it is like to be an animal again. We call it the “animalization process.” 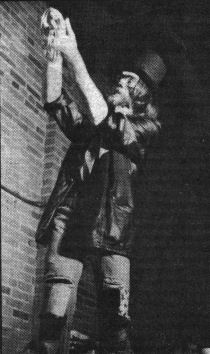 As part of this last presentation, Art DeAwful performed his illusory magic show. A true showman if there ever was one, Art stupefied the already stupefied crowd with his tricks and gags and the people went wild over his everful flower “that pissed beer.”

Closing out the scheduled performers was Peaches, local crowd-pleaser, whose sophisticated blend of jazzed-up rock and rocked-up jazz got the crowd to its feet again for the bestial cavorting which eventually stretched on until the early hours of the morning.

Pete Zangara’s tight combo provided what would be a fitting end to any bacchanalian revel, but, with them having raised the energy level all over again, it seemed only right at the close of their set for Ted and Dave and Company to rise to the occasion again and propel the assembled multitudes into oblivion with an all-night jam. And this they did, to everyone’s great satisfaction, aided ably by guest vocalist Bobby MacDonald.

What a night! Everyone was happy, the FE even made enough money to hire hit-men to knock off a few of our creditors. But more importantly, enough people cared enough to generate the voltage which is what really sustains a “movement” paper.

As Ted Lucas put it to me afterwards: “It will all get back to them.”