The following are excerpts from the testimony of Sgt. Allen Crouter of the Detroit Police Intelligence (Red) Squad taken from him in connection with the lawsuit asking for disclosure of the contents of some 50,000 police files maintained on Detroit individuals and groups.

Crouter, a longtime foe of the Fifth Estate, was being quizzed in regard to the document appearing on this page by one of the attorneys cooperating in the suit The black lines covering names were required by order of the Court which has forbidden the disclosure of identities until final disposition of the suit. See related article, More on Red Squad in this issue. 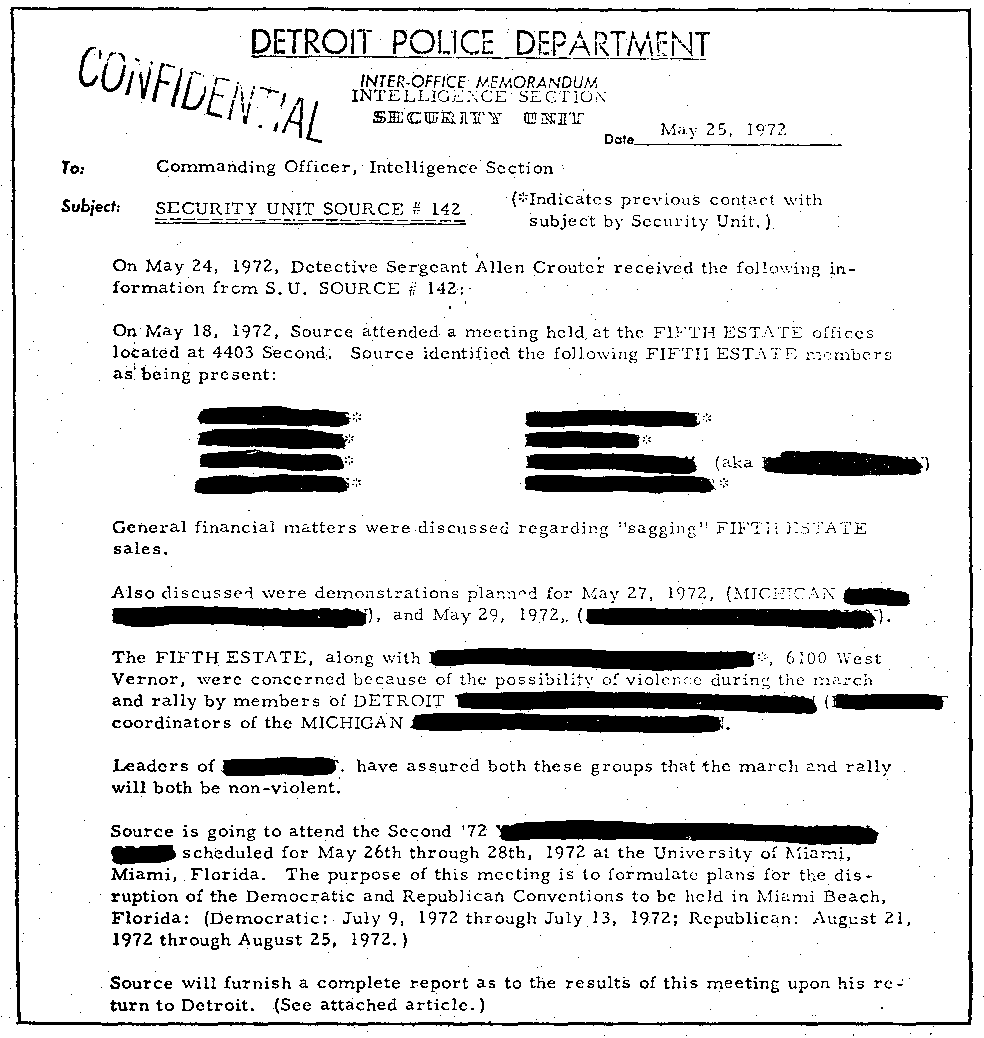 Attorney: Referring to the sentence on Page one that says, “General financial matters were discussed regarding ‘sagging’ Fifth Estate sales.” What possible relevance could your superiors have, or what possible reason would they want to know about the sagging sales of the Fifth Estate?

Crouter: Well, the Fifth Estate had been, when it was going strong, a very strong force behind the radical movement and I think it would be of interest to our department and to our intelligence network if a paper such as that were going down the drain.

Attorney: Why? Why would that be important?

Crouter: Number one, it would cut off some of their financial support. Number two, it would mean that would be one less thing we had to worry about.

Attorney: What do you mean, “worry about?” Why would you be worried about the Fifth Estate?

Crouter: Well, I can recall one instance where my name and home phone number and address were published and it didn’t please me too greatly.... It would not be a paper out on the street, if I may use the word, inflaming the student community. It would not contain articles on the preparation of fire bombs, so on and so forth.

Attorney: On the second paragraph in this report it says that the source attended a meeting held at the Fifth Estate offices. Did you instruct the source to attend that particular meeting?

Attorney: How would you decide how much to pay a source for information?

Crouter: Normally it would depend on the information that he gave me, how important it was, how relevant it was.

Attorney: Did you think this information was very important?

Crouter: I thought it was considerably important.

Attorney: How much would you have paid for this important information?

Crouter was then asked about copies of Fifth Estate financial records including a late ‘sixties subscription list that found its way into the police files by way of a “source.”

Attorney: Didn’t you question your source as to the legality of his acquiring these reports?

Attorney: As a police officer aren’t you concerned with the theft of documents? Wouldn’t it appear to you that the FE did not intend for the Detroit Police Department to receive these documents? Did you ever ask the FE for these documents?

Attorney: If you were so concerned, why didn’t you just ask them about their financial condition and ask them for a copy of their reports?

Crouter: Because I think I know what the answer would have been before I asked. Do you want me to put it in the Fifth Estate‘s words?

Crouter: I don’t want to do that in front of the ladies.