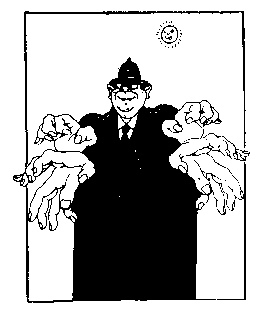 Recent revelations in the class-action lawsuit against the Detroit Police Political Intelligence Squad have shown political surveillance and harassment to be even more widespread than originally suspected.

Besides maintaining thousands of secret files on people, to which the Plaintiffs’ lawyers have just gained access, the Detroit Police kept a record of “Letters to the Editor” which expressed unpopular views; stole subscription lists to local newspapers; and interfered with peoples’ employment.

The suit filed on behalf of several radical groups, including this newspaper, and movement activists, is being heard in Wayne County Circuit Court in front of Judge James Montante.

The suit names Detroit Mayor Coleman Young and Police Chief Phillip Tanian among the defendants. Young, whom the police maintained a subversive file on before he was elected to office, has been fighting the efforts of the suit to reveal the extent of the police spy activities.

Richard Soble, one of the attorneys for the Plaintiffs, told the Fifth Estate: “It is clear from the files of several people employed in automobile factories that the police approached executives of the Big 3, told them which of their employees was involved in certain political activities, and caused several of these people to be fired from their jobs.”

Jim Jacobs, one of the Plaintiffs in the suit, was fired from his teaching position at Macomb County Community College as a result of police harassment concerning Jacobs’ political activities. Jacobs was later rehired after fighting his dismissal.

As a result of gaining access to the secret files maintained on the Fifth Estate, we have learned that the police stole, copied and returned a complete set of the FE’s subscription list (probably sometime in the late ‘60s), as well as various financial documents from the FE’s files, apparently through an inside source.

Besides the stolen documents, the FE’s files contain information showing that the police interfered with the paper’s ability to put newspaper coinboxes on the city streets, and later even confiscated several of these coinboxes and kept them hidden for a period of time. The FE is currently engaged in a separate lawsuit concerning this particular harassment over the coinboxes.

Meanwhile, the process of discovery is continuing in the lawsuit, which charges the Detroit and State Police Departments with violating the constitutional rights of thousands of Michigan citizens by maintaining subversive units.

The investigation has so far uncovered over 50,000 files kept by the Detroit Police alone starting as far back as the 1930’s.

Although the suit is asking that the court open the files to anyone who has one and then that they be destroyed, only the named Plaintiffs in the suit have had access to their files. If the court rules against the police, public notice will be given to allow those Who think they may have a file to gain access to them.

In addition the suit asks that political spying be declared unconstitutional under the U.S. and Michigan Constitutions.

So far the State Police, unlike their Detroit counterparts, have not released any of their secret files to the Plaintiffs as a result of the lawsuit. Because it would mean disclosure of their files on over 50,000 individuals, kept since the 1950’s, the State Police are appealing the court order.

in the meantime, Zolton Ferency and the Human Rights Party have a separate lawsuit against the Michigan State Police demanding that they disband their political surveillance units and destroy all existing files. The plaintiffs in the Detroit-based lawsuit feel it would be disastrous if these files are destroyed before the people have access to them and also do not believe the police will actually desist from political spying on their own initiative.

We asked Attorney Soble why he thought the political surveillance had taken place and to what purposes the police were putting the information they gathered.

“We feel that the police wanted to monitor people who are critical of the government in power and that this government wanted to know these people in order to be able to destroy them or their effectiveness in various ways such as harassment on their jobs, in their schools or even with their friends,” he said.

Soble also added: “Our investigation shows that there exists a nation-wide surveillance network. The Detroit Police have admitted passing on their information to the FBI, and the Rockefeller reports on the CIA show that the FBI passed such information on to them as well.”

“We also believe,” said Soble, “from statements in people’s files, that police agents attempted to involve others in illegal activities or even commit the acts themselves and shift the blame onto those upon whom they were spying.”

Putting all good intentions of this lawsuit aside, one cannot actually expect a government to play by a set of rules, for that would make for a “fair” games Those in power do not give it up easily and their methods will reflect what is necessary for them to maintain it.

To the extent that the police are stopped from prying into the affairs of people, the suit will have accomplished a good end. But governments by nature are ruthless and it is naive to think that one can be a radical risk-free.

NOTE: All of the attorneys in this case have been working without fee and many legal expenses have been incurred throughout the proceedings. Contributions may be sent to: The Citizens Committee to End Political Surveillance, 506 Monroe, Detroit, MI 48226, to help finance the suit.

See transcript of police testimony regarding the Fifth Estate on the following page.