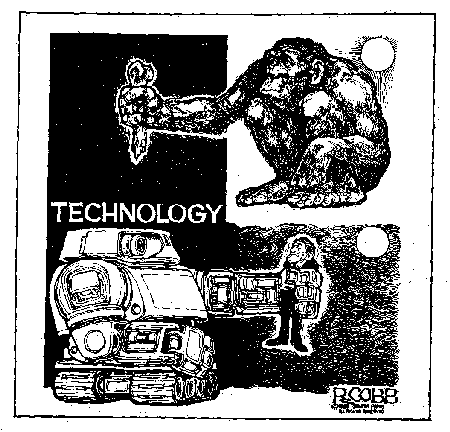 Our high at your printing of our article on the decomposition of capitalist society waned appreciably when we noted that about 30% of the original had been deleted. We had, of course, performed our own editing job before submitting, on the wealth of available data.

Neither were we heartened to see so much space devoted to A.R.‘s dreary Marxist determinism entitled “The Big Picture.” “Never before in the history of human society,” we are informed, “has the whole social order been confronted with the possibility and necessity for consciously evolving into a whole new social form...”

How convenient; and here we thought that revolution has always been a good idea. Oblivious to the real history of the movement to abolish society, A.R. seems to be at least as deficient re his own sense of subjectivity.

And necessity, as a friend of ours is wont to say, can go fuck itself.

A.R. responds: The contemporary movement of international Capital, though in a sense admittedly dreary, remains a fact regardless of deterministic criticism. I agree that revolution has always been a good idea, but it is the social relations of society that need abolishing, not society itself. And good ideas, if not acted upon remain stagnant. Fuck necessity and we remain barbarians

Also, does your criticism of the concept of “necessity” apply to your statement in your article “Decline and Fall of Everything” where you say, The need for revolution becomes clearer ...”?

I’d like to comment on the article in the latest issue by John and Paula Zerzan, “The Decline and Fall of Everything.” It presents an excellent account of the extent of social decay in contemporary America, but it weakens itself by its optimistic ending, viz. “The need for total revolution becomes clearer and a seemingly unavoidable nihilism is advancing as its prelude.”

This is all well and good; it makes us feel good. We can rest secure that the total revolution is on its way to resolve the problems of decaying capitalism. My only problem with this is that the Zerzans provide no evidence that the result of the nihilism, depression, vandalism, suicides, etc., that they detail will be the total revolution we all (I hope) desire.

There are several other possible outcomes of the current crisis in daily life. For example, there can be a turn to a much more authoritarian solution (the fascism much of the left always talks about). Another possibility could be a continuance of the present atmosphere of social decay for an extended period of time.

I think that there is a false assumption among revolutionaries that if things are bad, then change is coming. This may be, but it isn’t proved.

The Zerzans don’t even succeed in proving that the decay that they so movingly portray has its roots deep in the structure of American society and is not due to more surface phenomena that could be alleviated by a new reformism. I’m not arguing either way; what I’m doing is suggesting that this is an important topic to be discussed.

I notice that the Fifth Estate is big on Wilhelm Reich, but you seem to have missed the part of Reich’s point which is that the German revolutionary movement had suffered a serious defeat by the victory of fascism and that one of the causes of their defeat was the eternal optimism of revolutionaries who were so sure that history was on their side and that the social decay clearly visible in the late Weimar Republic were leading inevitably to social revolution.

I think that this optimism is abetted by a tone of abstraction that runs through much of the FE. It reads like a paper for the committed who understand a new language called “total revolutioneze.”

What I am arguing for is to not let jargon substitute for thought and ideas.

Regarding the article appearing in your January issue entitled “Secret Police Files Exposed,” does this mean the Detroit Police have the names of all Fifth Estate subscribers?

Staff note: Well, you can’t really say “paranoid” if your worst fears turn out to be true, can you? We tried to stress in the article that the subscription list discovered in the Detroit Police files was at least seven years old, but there is certainly no guarantee that some police agency at some level of government is not keeping track of subscribers to radical publications. You plays the game; you takes your chances.

I just got hold of and read your October/November issue. Mr. Durrutti is, I think, mistaken when in his “Unions and the Nature of Work” he states: “What is so glaringly missing from the analysis of contemporary marxists is their failure to comprehend the structural changes that capitalism has gone through in the last forty years.” Instead what is missing is a thorough understanding of Marx himself.

Though I agree with Durrutti’s neat explication insofar as it describes the nature of capitalistic production to produce merely for the sake of producing (i.e., for profit rather than social need), it should have been done in the context of heightened tendencies to do so in the face of technological developments. There are really no structural changes--what Durrutti (and Camatte) discuss is what Marx identified as “commodity fetishism” in Capital over a century ago.

There’s really nothing new under the sun. The more things change the more they remain the same.

I recently received a letter from partisans of the Surrealist movement in Chicago, who are very concerned about the imprisonment of one Paulo Paranagua--a Surrealist artist/revolutionary in Argentina.

They asked me to try to get word of this to any and all those interested in Surrealism, that the fascist Peron government of Argentina has swept Paranagua up with an iron broom that has thousands of radical and progressive people in the steel house.

His supporters in Chicago are worried that he may be beaten and tortured there, as is customary in such regimes that rule with terror and violence. Anyone who cares should write to the Argentine government and may do this indirectly by writing in care of Franklin Rosemont, 2257 North Janssen Avenue, Chicago, Illinois 60614.

Every spark adds to the heat, and I hope the FE would consider printing this letter, so that artists in this country, who have the dubious luxury of being allowed to scream their heads off, may see the vital necessity of banding together--and a possible glimpse of their own future.