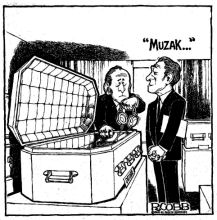 I would like twelve copies of your FUCK AUTHORITY poster. The day after I received it I put it up on a wall in my office in the Welfare Dept. here in San Francisco. Great responses of approval from the welfare applicants whose intake papers I process--“I’d like one,” and from fellow employees. Even more than from the “Fight Celibacy” bumper sticker I’ve put up.

To the Fifth Estate:

I feel it necessary to make one important criticism of your “Ann Landers” article. Essentially, the parody of funeral directors defending death and necrophilia as the underlying foundations of modern capitalist society was well-done.

Unfortunately, by identifying the destruction of genuine human LIFE through the process of commodity production and alienation with simple Death serves to spectacularize real, genuine physical death (as a component part of real, genuine, human social relations).

Though not stated directly, it is implicit that Venom’s use of “death” signifies the “living death” or non-life of spectacular society. Death in this society, the real death of a human being-- an integral part of the human universe-- suffers the same fate of all human experience under capitalism in its modern form.

Real death (which all face) becomes the image of death, a mere representation. Thus its grandeur as an element in the cycle of human social reproduction is obfuscated by its presentation as another recuperated category, another salable commodity. It is denuded of its drama and replaced with a banalized version of itself.

Human beings under the domination of Capital--of the objects which they produce--cannot live with dignity. And they cannot die with dignity. Physical death--because it obviously cannot be totally recuperated--remains the great negation which all fear equally. Death (and old age) are swept under the rug, frozen along with Walt Disney to awake eons hence to new youth.

This spectacularization has its roots in the original Christian mystification to cover up real human misery on earth with a religious rationalization and the promise of “eternal life” after death.

Capital and the reign of commodity-fetishism in its advanced form have rendered untenable the afterlife of Medieval obscurantism. So its products guarantee an eternal youth of Camay Soap, Playboy libertinism, and the velocity of Honda. With inevitable death, everything possible is done to transform it into that social limbo which characterizes non-life.

Funeral homes, resembling mansions (marble pillars and all), promise to make the dead look “more natural than life.” They are subsequently buried in air-tight, water-proof cement tombs and vaults in vast areas of necrophiliac parkland. Even death enters the capitalist market.

Ethnicity, culture, and the historical experience vary the responses of different peoples to the experience of death (and life). For example, Octavio Paz writes in his brilliant analysis of the Mexican mind, The Labyrinth of Solitude:

“The Mexican’s indifference toward death is fostered by his indifference toward life. He views not only death but also life as non-transcendent. Our songs, proverbs, fiestas, and popular beliefs show very clearly that the reason death cannot frighten us is that ‘life has cured us of fear.’ It is natural, even desirable, to die and the sooner the better.

We kill because life--our own or another’s--is of no value. Life and death are inseparable, and when the former lacks meaning, the latter becomes equally meaningless. Mexican death is the mirror of Mexican life. And the Mexican shuts himself away and ignores both of them.”

In the case of the North Americans, the profound terror of death is partly rooted in the utter fear of genuine life. As Bobby Cooperstein remarks in his Reproduction of Human Capital:

“If Dracula horrifies, it is because he steals life without killing, transforming his victims by a process of gradual addiction into UNDEAD predators, into living corpses like himself, who, thus initiated in his vampire army, engage in a total war against the STILL-LIVING.”

While I agree, for the most part, with your perspectives I am not in agreement with you on the question of unions and unionism. True, the unions, so called, that make up the AFL-CIO, as well as the independents, are a conservative force and act as a break on the struggle for workers’ emancipation.

The Industrial Workers of the World (IWW) recognized this over 70 years ago. As the Preamble states, “The trade unions...aid the employers by helping to convince the workers that they have interests in common with their bosses.”

It is this class collaborationist ideology of the union bureaucracy and not unionism itself that is counterrevolutionary.

You point to wildcat strikes as proof that the unions are reactionary and that the workers are rejecting the unions. This is a false analysis. Wildcat strikes are an indication of the growing vitality of unionism--the only unionism that counts--the rank-and-file unionism based on the shop floor where it can be controlled by the workers.

We must make a distinction between union democracy and unionism. Real unionism is merely an understanding among fellow workers to act collectively in their common interests against the boss. The shop floor organization that emerges from this activity can be called a union, a shop committee or a factory council.

Durrutti replies: The question addressed in our article, “Unions and the Nature of Work,” was not whether or not workers militantly supported unions but their function within the political economy to regulate the sale of their members’ labor to Capital. This has been the function of unions since their inception but since World War I they have increasingly played the role of policeman of labor to the point now of being auxiliary organs of Capital which are unreformable and whose activity is indispensable to Capital for the smooth running of production.

To confuse formal union organizations (UAW, UFW, Teamsters, etc.) with the self-activity of workers on the job hopelessly confuses things. The latter is the stuff revolutions are made of; the former is the arena of endless struggles for reform within capital.