The Dadaists were writers and artists who made it their raison d’etre to destroy culture, or at least literature and art. They carried to its ultimate and absurd conclusion the distinction between form and content in art, rejecting literary conventions, the frame round a canvas, and even the ‘laws’ of normal speech--all these restricted and deformed the authentic complexity of mental reality.

The real activity of the mind was too fluid, immediate and spontaneous to be fixed or frozen in permanent form. Furthermore, all products of the mind, from its most incoherent mutterings and day-dream meanderings to its most mature and noble thoughts, were of equal value...Dada was first and foremost an outburst of indignation and anguish at the debacle of Western values in the prolonged savagery of the (First World) war...The Dadaists believed that a fresh start could only be feasible after a total cleansing, a spell of generalized iconoclasm which would sweep away the unwholesome remnants of so much hypocrisy and corruption.

Who made Dada? Nobody and everybody. I made Dada when I was a baby and I was roundly spanked by my mother.

Yes, Dada has been concealing its lecherous repulsive self from the world in (where else) Moto Shitty, Deeeeeetrouyit, where everyone got Dada, mama. The headquarters of Dada have been discovered by local aborigines in a dreamy haze on Lincoln Street south of Grand Blvd. Dada hides behind a front-organization, the Detroit Auto Dealers Association, but its sly wink shows behind, the facade of bourgeois respectability, for splashed across the building in sloping letters like techno-modern reliefs is: DADA.

Art is not just encountered in museums and crypts:

“Perfectly sure, the facts are revealed by grotesque mouths. They think that Dada can prevent them from practicing this odious trade: selling art expensively.

“Art is a pharmaceutical product for imbeciles.. 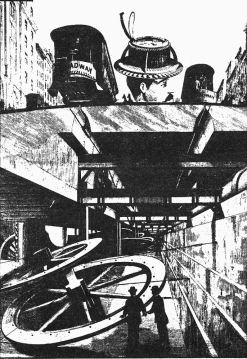 They study regularly in a catechistic way.

Wonder woman and I went to the Dada to take some pictures in order to expose the hideout of the spirit of cultural space invasion. Outside, people wandered by the weird brick 90 degree angled venetian blinded monstrosity without even realizing the message.

Hustlers tried to look nonchalant, eyes crossed, “I don’t trust these crazy folks one bit, you ain’t takin’ my picture,” and one old lady posed proudly with her grimacing pekinese. Wonder woman shot me with her camera and I crumpled up more under Dada with each subsequent frame, bringing insightful chuckles out of a passing old black Grandada.

He stood there captured by Wonder Woman’s moment-machine, and then was lost in the day. Me lying on the ground and all the autos dealing away inside. Then Wonder Woman thought it would be a good idea for me to stand on the roof Above Dada rather than below, but there was no way up, so I went inside alone.

“How do I get to the roof?” I asked, figuring I’d say I was a conni-sewer of tar, a Free Press reporter for Art, but she was already Dadad! “Oh, you’re from the air-conditioning company, right?” “Yeah,” I said, her story was better.

“Well, you’ll have to wait for Mr. Putrid, it’s his lunch hour and I can’t disturb him.”

I stared at her cold sore to make her nervous. “Can’t you just show me the way?” “I’m afraid not,” she replied, “this is my first day and I know nothing, nothing, nothing.”

Enter Miss Suburban Together, who doesn’t know either, but Mr. Putrid has consumed his lunch and is Ready! “I should have told you,” he says, eyeing me more suspiciously by the moment, “There’s no interior stairway. Don’t you have a ladder?”

“They just drove off with the truck, I’ll have to get my ladder later,” I said, moving for the door as he tried to remember the police lineup he saw me in last year. Outside, I wandered around the building and into the alley. Dada was impregnable, like a cold-cut. No way to climb, a parachute would have been helpful but all I had was a pocket full of changes, some linty Dada from yesterday, something in my eye.

Three tapirs were pulling down a perfectly good ruined and burned garage with a rope tied to the front end of an old convertible. “You guys got a ladder?” I asked. “I want to get on that building.”

“Uh uh,” said one, who’d want to stand on Dada? I left them to their creativity, the front was ready to collapse under the grunts of the old auto.

I was just a journalist, pimping that innocuous waif with the unconscious scar spitting into the face of every auto dealer shoving bananas into the radiators of their wares, big stinking rings turning the fingers of the world green green Green with their MONEY, their dadashit! “Was there ever a bigger swine than the man who invented the expression time is money, time and space no longer exist for modern man.

“With a can of gasoline under his behind man whizzes faster and faster around the earth so that soon he will be back again before he leaves.” (Jean Arp, “Notes from a Diary”) The Detroit Dealers should give their Dada to the Edsel Ford Xway Tire, the mating of leg to vomit, round drumbeat of incendiary bombs, to florescent lights and neckties strangling forevermore the Detroit Auto Dealers Association and their dreadful business, run them over like simon legrees with a gleaming new train of thought.

Back around front. Wonder Woman sat dejectedly on the curb. The two secretaries stood out front. Miss SubTo, smoking her cigarette, asked me venomously: “Where do you work?” “I’m a writer,” I said, regretting that I had not continued the charade. “We want a picture of me on the roof of your Dada sign.”

“For what!” she demanded. “What kind of caption would you put on that?” Exposes of all the dirty deals loomed in her mind like dracula baseballs.

“Dada was an art movement in the 1920’s having nothing to do with turnips,” I said, lying, for Berlin Dadaists Grosz and Herzfelde said it did. Wonder Woman was looking at an airplane or a hat flying down the street so she did not take our picture.

She was looking for Icarus to splat his poor little self down on the John C. Lodge Xway. “You can’t escape it, it means something. You can’t get around society, you know,” said Miss SubTo heatedly. Miss Day was enjoying her break immensely and I was getting disconcerted.

I thought the name WRITER would elicit gasps, genuflections, a simple nod, but she was too Together. I needed a monocle to infuriate her, the roof flew away like a rotten orange, Dada was waiting for a photo, its ugly nose grinning despicably. “Look, you don’t understand,” I argued, “Dada encompasses everything, in order to negate it, including your salesmen. Dada is your cigarette butt.”

She thought I said her butt, for she lit my hair on fire. “Dada,” she said. “Right,” I replied, “now you’re catching on,” but she was miffed and stormed into the building to tell her superiors. “Wait, let me take your picture,” I yelled, almost breaking Wonder Woman’s neck as I grabbed her camera, but it was too late.

Miss Day said no, but we took hers anyway, she was so submissive, dreaming of rockets or lanterns, she went inside. Two businessmen passed by and were lapped up by the tongue of Wonder Woman’s NowClutcher, stripped bare by their bachelors, machine-gunned momentarily from the pillbox of the unconscious.

The venetian blinds seemed to part slightly for binocular vision, who are these aliens disrupting our normality, our reality, our Regularity? Meows, moans, police sirens somewhere (always!). “Maybe they’re calling the police,” said Wonder Woman, edging for the car. But it was late, anyway. DADA had tomato paste all over its frown. No more pictures.

I took another shot of Wonder Woman as she steered our ship back down Trumbull. Back on Lincoln Big Deals were brewing, scrambled brains roller-skated from file cabinet to file cabinet, Dada was weathering from the centuries, next week’s rains. Mr. Putrid was scoring.

“Man is a beautiful dream. Man lives in the saga-like country of utopia where the thing-in-itself tap-dances with the categorical imperative. Today’s representative of man is only a tiny button on a giant senseless machine. Nothing in man is any longer substantial. The safe-deposit vault replaces the may night. How sweetly and plaintively the nightingale sings down there while man is studying the stock market. What a heady scent the lilac gives forth down there.” (Jean Arp)

Later Wonder Woman and I took a bath together while listening to orgasm-music, cellos, english horns. She had a piece of dead skin stuck on her toe so I bit it off and included it in this article.

DADA gives itself for nothing because DADA is priceless!