Attica: Victory at the trials

NEW YORK (LNS)--A little more than three years after the first Attica indictments were handed down at a snow-covered courthouse a few miles from Attica State Prison in upstate New York, the Attica defendants and their supporters have won an almost complete victory. 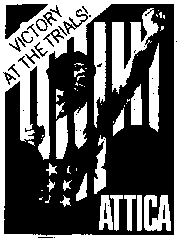 On February 26 and 27, all but one of the remaining indictments were dismissed by a Buffalo, New York judge. Under the shadow of pre-trial defense revelations of improprieties by state officials, a major indictment charging ten former Attica prisoners with kidnapping guards was dismissed. The next day two indictments charging three inmates with assaulting prison guards was also dismissed.

For the defendants it has been a momentous task fighting a $4 million effort by the state to convict them. Beginning on December 20, 1972, fourteen months after the uprising, a special New York State prosecutor handed down the first of 42 indictments against 62 prisoners who were at Attica. It was the largest, most determined effort to prosecute and convict prisoners to date.

Although 39 prisoners and guards were killed by police gunfire during the retaking of the prison, only one state trooper was eventually indicted.

The indictment against the trooper on a minor charge of recklessly discharging a shotgun in the prison yard was also dropped on February 27, a scant few months after the indictment was issued.

The sixty-two prisoners named in 42 indictments were charged with a total of 1,289 crimes. Since then, two defendants were convicted, five were acquitted in jury trials, and seven have pleaded guilty to lesser charges. Many of the earlier dismissals were for lack of evidence.

The reason for asking for the most recent dismissal, the special Attica prosecutor Alfred J. Scotti admitted in court on February 26, was “flagrant deficiencies in the state police investigation of the retaking” of the prison.

Scotti also conceded that the state prosecution had failed “to perceive these deficiencies” and would be unable to prosecute any state officials for police shotgun killings during the retaking of the prison.

A spokesperson for Attica Now, Robert Cunningham, said that the defense was prepared to show a long chain of improper actions by the state in its prosecution efforts. This included, he said, the destruction of information favorable to the defense by the prosecution staff and state police, as well as selective prosecution of inmates since no real attempt had been made to indict state officials.

Cunningham also said the defense was prepared to show that high state officials, including then Governor Nelson Rockefeller, had participated in meetings to cover-up crimes by state officials in retaking the prison, while at the same time setting the stage for the massive indictments against the prisoners.

In the courtroom on February 26, after the major kidnapping indictment was dismissed, the mood among the defendants and supporters was one of subdued jubilation. A brief cheer broke out and Robert Cunningham, a spokesperson for Attica Now, later described the dismissal as a “step forward in a long process.”

But still, Cunningham said, “the truth about Attica has not been acknowledged. The implication left is that the brothers were responsible for crimes at Attica. Nothing was done against the state police.”

Left still unfinished for the Attica defense is the still pending charge against Dalou Asahi, and the conviction of two defendants, John Hill and Charlie Joe Pernasilice convicted of assault and murder of a prison guard.

Amnesty for Hill, Pernasilice, and Dalou Asahi is a major priority of Attica Now, according to Cunningham.