At a time when the Pinochet dictatorship’s murderous repression of political opponents has isolated it internationally to the point that the blood-soaked regime is even a public embarrassment to the White House, help has arrived from the Maoist bureaucracy in Peking.

“The Chilean military junta, increasingly isolated and beleaguered at home and abroad, is seeking stronger ties with China, one of its few remaining friends,” Hugh O’Shaughnessy reported in the November 23 issue of the Observer. 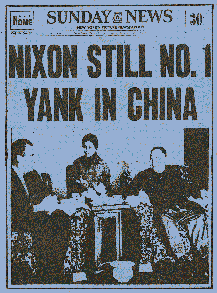 “Commandant Gaston Frez, head of Codelco, the Chilean State copper corporation,” O’Shaughnessy continued, “announced in Santiago last week that China would increase its imports of Chilean copper from 8,000 tons this year to 34,000 tons in 1976.”

A substantial loan from Peking is reported to be part of the deal. In a recent interview with Pinochet, New York Times columnist C.L. Sulzberger asked if there were any truth to a rumor he had heard that “Chile was discussing with Peking a $58-million loan to this tottering economy” as part of the copper negotiations.

“Much to my surprise,” Sulzberger said in his November 29 column, “he confirmed this.”

According to Sulzberger, Pinochet “said discussions with the Chinese had begun during the Allende era but were being continued now, after having been suspended. ‘The matter remains open and the loan is still pending,’ he added.”

“I confirmed this in conversation with the Chilean who has been a principal negotiating contact with Peking’s ambassador, a man he describes as ‘very, very patient.’”

Pinochet has every reason to be pleased with Peking’s diplomatic representatives.

Following the coup in September 1973, the Chinese embassy in Santiago closed its doors to all political refugees. While working people were being gunned down by the thousands and political prisoners were being executed and tortured, Peking’s embassy turned desperate refugees away, leaving them to the mercy of the Chilean gorillas.

Furthermore, in face of worldwide outcry against the slaughter, Peking told the pro-Allende ambassador to China, Armando Uribe, that he was no longer recognized as Chile’s representative. By November 5, a representative of the military dictatorship was reported to be in Peking to take Uribe’s place.

For the sake of diplomatic and trade concessions, Peking has once again betrayed the most elementary principles of proletarian internationalism. In doing so it has won approval from Pinochet.