Race war has become a distinct possibility in Boston. Over thirty people have already been hospitalized from racial confrontations since the so-called “Procession Against Violence” called by Mayor Kevin White took place on April 23.

What is happening is the culmination of a series of events that have escalated with mounting fury over the last few months. White racist mobs are becoming more brazen and aggressive. On April 15 an anti-bussing lynch mob assaulted black attorney Theodore Landsmark outside city hall with an all too appropriate weapon--a flag pole draped with an American flag. The police stood by. 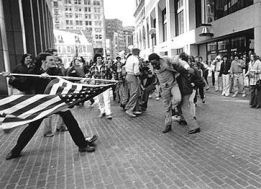 On April 17 two black bus drivers were beaten by racist thugs. Three white workers who came to their defense were also beaten.

These are only two of scores of incidents. Most aren’t picked up by the press. Racist attacks are a daily reality in Boston. White racist thugs have even taken to “night-riding” KKK-style through black neighborhoods.

This atmosphere of hate and violence has understandably brought a spontaneous response from young blacks. On the night of April 19 a white man was dragged from his car and beaten by blacks. White motorists were stoned and a train passing Roxbury was stopped by a barricade across the tracks.

These actions prompted Mayor White to declare April 23 a “Procession Against Violence” which posed itself as a “neutral” rally against “the violence of both sides.”

Various politicians, including U.S. Senator Edward Kennedy and the governor of Massachusetts, squealed their support. Their sanctimonious concern over violence was somewhat belated considering the violence against blacks that has gone on for years. It was only when young blacks retaliated, however indiscriminately, that these politicians cried out against violence.

Other less successful, but aspiring politicians--the Socialist Workers Party (SWP)--and their anti-racist popular front, the April 24 Anti-Racism Coalition, were intimidated into calling off their much publicized pro-busing, anti-racism demonstration slated for April 24.

On April 16 The Militant, the SWP paper, had editorialized that no capitalist politicians could “be relied upon to solve the problem facing the black community. None of them can even be relied upon to take action to halt the rising wave of out-and-out physical assaults on blacks.” For this reason they were calling for the march on Boston.

However, on April 21 they announced that the march was canceled because they could not be assured of police protection. As Maceo Dixon of the SWP said, “It’s not possible to hold a peaceful, legal activity at this time.” When will it be possible?

Revolutionaries defend their own demonstrations. Let us point out to Mr. Dixon (who claims to be a revolutionary socialist) that revolution is not a peaceful, legal affair. We must assume that the SWP would never consider a revolution because they couldn’t be guaranteed proper police protection!

The SWP, a middle-class organization used to organizing on college campuses where they can play the game of bluff, now is playing with higher stakes. In the working class arena of Boston they are playing with people’s lives. Even their wretched newspaper of April 30 contained an article decorated with a “sales scoreboard” discussing how their coverage of Boston had raised circulation, and a call for people to defend the blacks by voting for their slick, irrelevant presidential candidate.

Nobody should overestimate the effect of demonstrations against racism as a means of putting an end to racism. No gaggle of liberal politicians, clerics, and slick socialists which they gathered can do that. By criminally calling on the class enemies of black people, i.e. cops and federal troops, to “restore law and order,” the SWP has been trying to hire itself out to the liberal bourgeoisie as a respectable “left wing” errand boy. This is what its relationship was to various black Democratic party politicians and the liberal, middle class NAACP in previous actions in Boston.

It is this very reliance upon trade union bureaucrats, politicians, and the like which reveals the vulnerability of the SWP “revolutionaries.” When the NAACP failed to endorse the demonstration of April 24, and was followed by the Nation of Islam, the SWP efforts collapsed. Who are they kidding?

We are not necessarily criticizing the SWP for calling off the demonstration. It was their whole approach which made its being called off inevitable in today’s Boston. The SWP is totally incapable of mobilizing working people for defense against racist attacks because their pip-squeak reformist politicking keeps them tied to the bourgeoisie.

In calling off the march without drawing the real lessons from their failure, these parliamentary cretins have reached a new depth of cowardice and impotence which only serves to bolster the morale and fighting capacity of the racist ranks. 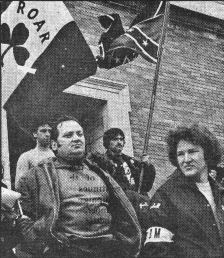 The racist “southies,” and the paramilitary fascist South Boston Marshals, don’t have any doubts about independent action, however. They are perfectly willing to take the issue to the streets, and singularly uninterested in the “civilized debate” which the SWP cherishes. They have stepped up their activities against black people, physically threatening black SWPer Maceo Dixon and Boston NAACP president Thomas Atkins.

They patrol white neighborhoods and have attacked black people traveling through or working in these vicinities. On April 26, thirty people were hospitalized in racial confrontations.

What must be underlined is that the South Boston Marshals and similar groups in other sections of the city represent the construction of a fascist movement in Boston. This extra-legal wing of the racist movement is crystallizing into a street-fighting, racist, anti-labor, anti-communist movement--the classic characteristics of fascism. And fascism cannot be beaten in “pleasant, honest debate,” because it does not organize around debatable principles but around authoritarian, racist hysteria and military action. Anyone who seriously desires to smash fascism must be willing to organize to beat it in the street. The SWP will only hide under its bed until it is promised “police protection” from a police force which is obviously sympathetic to the white gangs.

The craven capitulation of the SWP to the racist assault is only the result of their entire policy from beginning to end. They were correct in warning black people that bourgeois politicians were untrustworthy and would not defend them. But it is also true of the politicians of the SWP. They have demonstrated that they, too, betray black people.

The situation is grave. It is notable that now even a respectable liberal civil rights march of the SWP stripe cannot take place in Boston. The racist wave is gaining ground rapidly. Only integrated working class defense squads can in the long run protect black people from racist and fascist attacks.