Now that the “liberation” of Angola by the MPLA [Popular Movement for the Liberation of Angola] has been completed, the Luanda government of Agostinho Neto has begun a vicious crackdown on political dissidents to secure its one party rule over Angolan capitalism (See February Fifth Estate). 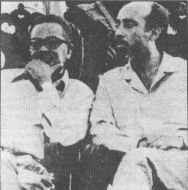 The Washington Post has reported the formation of underground groups after the arrest of over 100 of what Lucio Lara, the general secretary of the MPLA, characterized as “the partisans of Trotsky and Bakunin.”

One underground paper, Jornal de Operario, has charged the MPLA with making concessions to U.S. imperialism by inviting back Gulf Oil to resume its drilling operations in Cabinda Province (Gulf willingly paid the MPLA over $100 million in royalties up until December 1975 when stopped by the State Department) and for having sold out to Moscow.

Many U.S. and English newspapers report widespread frustration and discontent among the Angolan population resulting from months of bloody civil war and the following economic dislocation. The response of the MPLA has been to demand ever higher productivity from workers, forbid strikes, disarm self-defense groups and to ban all political opposition.

In the April 1 Washington Post, MPLA general secretary Lara charged that the “enemy groups” were CIA creations, had “crazy and incoherent language” and, apparently in the greatest sin of all, had taken to “insulting the MPLA point by point.”

The penalty for these infractions was stated by Angolan Interior Minister (police head) Nito Alves in the Lisbon daily, Jornal Nova He said some may be “re-educated” in camps, “but the intransigent ones, the most hardheaded, the most obstinate, will have to be eliminated.” Death for insulting the MPLA.

That these anti-working-class criminals should be exalted by the U.S. left gives us an insight into what would be in store for this country if any of the squabbling sects ever gained power here. The pro-capitalist MPLA is securing a totalitarian police state that will cooperate with competing world imperialisms of the Soviet Union and the U.S. (depending on which is convenient) and crush the Angolan working class in the process.