The Sun
Love Affair With Cops

The power groupies at the Sun have recently changed their focus. After running out of tin horn politicians to do interviews with, the Ann Arbor transplant has taken to promoting the police—something even the Detroit News and Free Press have had problems doing lately. The Sunites would have us believe that the brutal, dope pushing DPD has become “A New Breed of Cop” as their mid-May, littered front page blared. 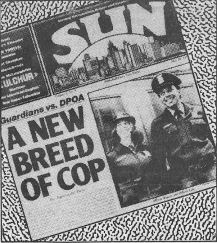 The evidence they present is a picture of a black male cop and a white female cop accompanied by a lame public relations interview that sounds like it was written at police headquarters. One wonders if the Sun editors (who incredibly claim to be “socialists”) actually believe that a change in the sex or color of cops changes their function.

The police are the armed force of the state and are charged with suppressing those who transgress capitalist law either as individuals (“criminals”) or as groups (revolutionary movements).

Since capitalism works the least well for workers and minorities, it is they who are most often confronted by the police apparatus and who fill the prisons. The injection of black and female police into decaying urban scenes will not change this equation one bit, but it does allow suburban liberals and political hustlers like the Sun editors to claim “something” is being done.

Anyone familiar with the Detroit heroin scene knows that black officers make more than their share of the profits and one can assume that it will only be a matter of time before women, begin getting cut in on the swag.

In general, there has been somewhat of a decrease in the brutality practiced on a day-to-day basis by the DPD, but nothing substantial. Most of the reduction has come about because of high command disapproval, but in the main thousands of beatings and hundreds of unnecessary shootings are perpetrated each year by both black and white cops against Detroit’s workers and the poor.

The May 20 Detroit Free Press carried a story headlined “Probe Hunts Gun-Happy Cops” and detailed how there is a “small percentage” of cops who are “repeatedly and unnecessarily involved in shooting incidents with citizens.”

Cops, white and black, know they can shoot civilians at will, on duty or off, and be certain that a web of protection will be thrown around them beginning with the lies of their partners and other cops, going right through to the racist prosecutor’s office (which almost never brings charges against police) and to the courts where, if the situation goes that far, such cases are routinely acquitted by sympathetic judges.

Further, as if to directly contradict the Sun’s “New Breed” sales pitch, a 29-year-old Detroit officer was charged with manslaughter on May 21 in the shooting death of a man who was present at a burglary investigation, but not involved. Willie (“New Breed”) Doss is accused of having lied when he filed a report that the dead man attacked him with a club, after an autopsy showed a bullet wound to the back of the head caused the fatality. Supporting Doss’ lie was his partner, Officer Brenda (“New Breed”) Tansil, who repeated the same fabricated story. No one seriously expects Doss to be convicted and he will undoubtedly enjoy a six-month paid vacation and then be back on the streets.

The following issue of the Sun featured another front-page cop-glorification article—this time the assault trial of Flint police officer Madeline Fletcher (pictured out of uniform and holding her daughter), who is charged with wounding a male officer during a shoot-out following an argument. Fletcher, who was also shot during the incident, may be, as her defense claims, the victim of the racism and sexism which pervades all police departments, but to suggest that workers or minorities do anything but cheer when cops shoot each other is nothing less than treachery.

The re-adjustments in power relationships within the State repressive mechanism is of no concern to those who want to eliminate that structure in its entirety. The main function of the Flint police is to protect General Motors assembly plants in that area and to assure their smooth operation. If Buick workers were to go on strike or seize one of the plants as they did in 1937, Madeline Fletcher would be right in the front line of attack.

The Sun’s support of her and other cops only reveals their real politics—support for the ruling authorities and the system they protect.