Two hundred years ago today nothing happened. Literally nothing happened. Philadelphia was sweltering: the garbage men were threatening to strike, and had already enforced a slowdown. They knew that a goodly amount of refuse and filth was going to collect in the city for the July 4th Continental Congress. Flies swarmed over the heaps of trash bags lying in the streets next to the piles of bodies of plague victims.

John Hancock woke up that morning, and dragging himself out of one of the garbage bags, began sticking his puffy hung-over snout into the doorways of local bars for a handout, a drink, and a piece of paper. He wanted to practice writing his name. He finally reached Independence Hall, a saloon brothel combination rented by P.T. Barnum for the event.

And what an event it was going to be! George Washington was planning to leap out of a gigantic cake dressed in Martha’s lingerie, clacking his teeth together like fossilized castanets. Later, Benjamin Franklin was to give the keynote address on his latest discovery: how to eat rocks. He was going to initiate a move to make rocks the official staple food of the new nation about to be dropped from the syphilitic womb of that stinking blood-stained whore, the English Empire. That new nation they were going to call the United Steaks of America or something along that line, meaty, tough, rough and ready, full of know-how, spit and polish, up ‘n at ‘em, singing in the rain, over there, but peaceful and with honor. They had it all planned out.

Benjamin Rush of Pennsylvania, whom the garbage men had adamantly refused to pick up and deliver to Independence Hall, and who first suggested the use of shock treatment on subversives, was flying with Sky King and Penny holding a brief case full of blueprints: shopping centers, subdivisions, golf courses, retirement parks, fast food chains, defense plants, bowling alleys—the works.

Of course there was a minor problem, that of some troublesome savages out west, and greasy, grimy foreigners who were too stupid to understand Manifest Destiny; but Eddy Rutledge, a South Carolina lawyer and free-lance hit man, was drawing up the proper papers that very moment. Anyway, Rush was leaving room for ghettos so he foresaw no major impediments to the growth of this bullish young giant gila monster, the U.S. of A. The child’s going to prove to be a more nauseating disease than its parent.

It must have been a hundred degrees in the shade. Alexander Hamilton, high on opium, was lying in the street in front of the hall, oblivious to both the carriages which were forced to drive around him, and horses that left their signatures from upturned tails showing their “horse sense” in evaluating America’s first big banker.

George Mason was playing pinball over in the corner of the bar while Hancock practiced writing his name on business reply cards. His pen had repeatedly run out of ink so he switched to the blood of a slave he had been using as a footstool. Patrick Henry was reading Adam Smith’s Wealth of Nations and waiting for a phone call from Daniel Boone. The rest, except for Jefferson and Paine, were at another even seedier bar gulping down innumerable pitchers of beer and waiting to watch the “Wild World of Sports” on the television which Franklin had just invented.

Franklin, meanwhile, was up in an aerial balloon trying to plug the contraption into a cloud. Some noble savages on a picnic down below were lazily shooting an occasional arrow at the fat globe in the sky, and also at the balloon which Ben had commandeered. Like everything else in Philadelphia that day and hence, it was held up by hot air.

Jefferson was eating cold pizza and drinking a stale warm draft upstairs in the brothel, trying to write the rough draft of the Declaration of Independence on the pizza carton. He had been admiring his likeness on the 2 dollar bills all morning and had finally sat down to fire off the document. “Fuck tyranny,—fuck the king, nyah, nyah, nyah, we thumb our noses and give Bronx cheers to monarchs,” he began. No that wouldn’t do. “In the beginning...” No, that had been done.

Hamilton stumbled into the room and fell flat on his face. He had shit his pants, and something about the odor gave Jefferson the inspiration to write about the country which he was helping to create. “This heah slaveocracy,” he began, “based upon freedom and the negation of such, based upon the upward mobility of pigs and dogs, based upon the insipid nostalgia regurgitated from broadcast systems, pulpits, and podiums like a vast, sordid, pornographic review, a slobbering dance of automobile crash/jackoff death, a sullen yawning fascist nihilism which starts at the used car lot and ends at the back of the line, for the cannibals, of the cannibals, stomping up and down on top of its enemies like a tyrannosaurus, slashing the throats of Indian gals with broken beer bottles —”

“Hold on thar, Jeff, boy, you can’t put that in the Declaration,” said Hamilton. “We got to sound sorta respectable, since this is gonna be the record of what takes place today. It’s got to sound as important as it is. After all, we got a revolution heah, we got to sound like we fit in our shoes or nobody’s gonna take us seriously 200 years from now.”

“Yer right,” replied Jefferson, let’s start with something real profound, but with fire, like a manifesto. When in the course of human events it becomes necessary...”

“We hold these truths to be self-evident; that all men are created equal and independent ...”

“Hold on, Jeff, ain’t you kinda forgettin’ something?” asked Hamilton. In ran Button Gwinnet of Georgia from another room, buttoning up his pants and screaming like a madman in his shrill, pig-like squeal. “That asshole Paine is causing trouble again! He and some other guys are going around talking about freeing the slaves and some other shit like that. I tell you the guy’s a radical, we got no use for him here.”

“Calm down, what’s the story?”

“Well, we was all sittin’ around playing strip poker when in walks Paine reading Vasari’s Lives with a parrot on his shoulder. He’s got some black woman with him named Harriet Tubman and they’re talkin’ about raising an army of blacks to fight. These fuckers want to go all the way, man, I mean they’re gonna ruin us! Seems he was down at the zoo lettin’ all the animals outa their cages when this woman walks up to him and asks if he’s really interested in freedom. Well he goes along with it and now they are causin’ more of an uproar than that time Washington got caught in that packing house with all that heroin. I tell you they are going to wreck everything!”

“Don’t worry,” Jefferson replied, crossing out the word “independent” from his text. “Nobody’ll go along with Paine. Who’s bankrollin’ this operation anyway?”

Suddenly an enormous pyramid with a single eye in its crown and playing an accordion stepped into the room.

“Egad!” screamed Hamilton, “It’s that nightmare I’ve been having all these years!” He jumped under the bed, trembling in fear.

The pyramid grinned and pulled a machine gun out of its mouth and prepared to shoot them all down.

“The tree of liberty must be refreshed from time to time with the blood of tyrants,” it smirked, pulling the trigger.

Unfortunately, the gun misfired. And it’s been misfiring ever since. 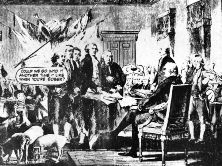 Could we go into it another time--like when you’re sober?

“The flag goes with the foul landscape, and our jargon muffles the drum.

“In great centers we shall aliment the most cynical prostitution, and massacre

“In spicy and drenched lands!--at the service of monstrous exploitations, either industrial or military.

“Farewell here, no matter where, conscripts of good will, ours will be a ferocious philosophy, ignorant as to science, rabid for comfort; and let the rest of the world croak.”

That’s the system. Let’s get going!

A flag-burning ceremony is a special way loyal Cub Scouts show their respect for our flag and all that it represents.

This ceremony can be done by a scout pack, den, or by individual scouts and their hoodlum friends.

1. Obtain an official size flag from your local school grounds, post office, or other government building. (Patriotic neighbors may also be able to provide a flag.)

2. The den stands in a hollow square and faces the flag. The den leader distributes safety matches to each member of the den.

3. Each member, symbolically spitting on the flag, lights it with his match.

4. Scouts should stand back a safe distance from the flag as it burns, and also make sure that local zealots do not impede the flag from burning completely.

5. When the flag is nearly completely burned, the den should stamp upon it so as to make sure that the fire is out, unless they have plans to use it in the arson of a nearby police station, church or school.

6. Don’t ask your parents what they think of the ceremony. Stop listening to your parents and start living for yourselves.

This special Bicentennial Salute has been brought to you by the Leon F. Czolgosz Memorial Rifle Association. Apply it to windows with pet milk and water and it will stay up forever.

So his woman is crying, crying.

Looking over here, she cries.

Long Hair, guns I had none.

You brought me many,

I thank you! You make me laugh!

Long Hair, horses I had none.

You brought me many, I thank you!

You make me laugh!

Long Hair, where he lies nobody knows.

Crying, they seek him.

He lies over here.

“...Again, you say, why do you not become civilized?

We do not want your civilization!”

“My young men shall never work. Men who work cannot dream, and wisdom comes in dreams.”