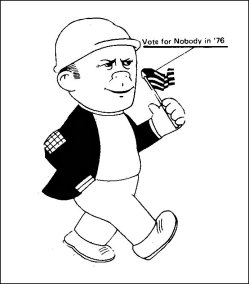 The winner is sitting in a crowded bathtub, clad in a stovepipe hat, tails and sneakers and snorting long hits of laughing gas. He staggers to his feet, steps over a cohort dressed like an inflated pumpkin and pushes past another wearing a banner reading: “Is there life after student government?” Finally, he slurs his only “victory statement” of the night.

“We’re going to tell the students about the regents,” crows the newly elected president of the University of Texas student government, Jay Adkins, talking about the college governing board. “These students will have to go out in the world and work for people like the regents. They need to know about them.”

It was not the usual victory party that night in Austin, Texas, but Adkins and his bunch were not the usual group of student politicians. They are the “Arts and Sausage Party,” a group of anarcho-absurdists who decided to enter the annual farce called student government elections and ended up soundly beating all the traditional candidates.

Their motto (among others) was “You can hang us on the wall or eat us for lunch, but don’t throw us away.” While their opponents were telling the 42,000 Texas students that they would “give students a real voice in the administration” and making other meaningless pledges, the Arts and Sausage party advocated turning the university health center into a “clinic of social acceptability” which would offer euthanasia on demand, a permanent hair removal facility and a sweat gland relocation section.

The university police would be disarmed, the Arts and Sausages said, with the school being protected by groundskeepers armed with wolverines. Noting the blatant presence of oil money and slimy Texas politicians at the huge school, they said they would rename the university “Fat City” to go along with the slogan “money talks.”

They said they would try to barbecue the famous school mascot, the Texas Longhorn steer, and promised to install pay toilets in the faculty and administration restrooms. “Their number twos will make us number one,” quipped an Arts and Sausage member.

The Arts and Sausage victory was followed this spring by an absurdist slate win at another Texas college and a near miss by the absurdist “Tupperware Party” candidate at the University of Minnesota who had pledged to leave town if elected.

These absurdist candidates have basically the same goal: to mock the student government game. At nearly every school in the nation, the usual student government flunky uses his or her office as a training ground and soapbox for future political careers, be they in the Democratic, Republican or Socialist Party.

The absurdist candidates manage to get themselves elected simply because few students ever bother to vote; the National Student Association in Washington, a kind of super-student government, begrudgingly admits that usually just five percent of a public school student body has shown up at the polls in recent years.

Even beyond the campus, the same non-voting behaviour appears to be catching on among the general population as well.

Less than one third of all registered voters chose to cast their ballots in the recent presidential primary elections, giving credence to several pollsters’ predictions earlier this year that for the first time in American history, less than 50% of the nation’s registered voters will vote in the presidential election in November. 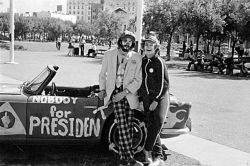 That goal has already been reached by the segment of the population under 25; in the last presidential election, less than half of that age group pulled a lever for George McGovern or Richard Nixon or any other off-the-wall candidates on the ballot.

Liberal commentators are predictably aghast. Some have written about a new, cynical majority of Americans, while others call the non-voting situation “frightening.” Meanwhile, “Vote For Nobody” campaigns have been started by groups in three separate states.

Back at the University of Texas, the Arts and Sausage Party offered an alternative to presidential politics and politicians in general this year.

“1976 is the year to be funny and creative,” explained one member. “We’re going to drag government wailing and screeching into the streets so the students can deal with it. We don’t want to tell students what to do. Students are big enough to do what they please. We’re going to enlist creative energy.”

To those who found the Arts and Sausage Party “frivolous” and slammed them for not taking things “seriously,” they had a quick retort. “When our opponents say issue,” declared one A & S member, “we say Gesundheit.”

Ford? Reagan? Carter? Humphrey? None of the above? More and more these days, as the mind-numbing New Hampshire primary turns into the boring California primary, Americans are shunning the usual political junkies and opting for “none of the above.” The pundits might call it a movement—a “New Majority” that is voting no confidence in a system that offers only false choices and no real power. The Harris & Cadell polls predicted earlier this year that fewer people than ever—less than half of all eligible voters—would cast their ballots in this year’s presidential election. You too can join the real “New Majority.” When someone asks you who you are voting for this year, offer them this advice—DON’T VOTE.