“A newspaper printed locally and called the Fifth Estate is running a dangerous advertisement, purportedly placed by General Motors, but actually put on the back page of the Fifth Estate by the staff of the paper.

“It gives the home addresses of fourteen key General Motors executives,” reported TV 2’s golden boy, Joe Glover, as he gave the viewers at home his most solemn on-camera expression, “including GM Board Chairman Tom Murphy. It even shows a picture of his home and a map of escape routes for anyone who wants to kidnap Murphy.

“GM has kept the addresses of its executives closely guarded since two kidnappings involving GM family members last fall. This article is sure to bring the crazies out of the woodwork again and it’s sure to cause mental anguish for fourteen families this summer.

“The people responsible for the ad are not journalists and should not be taken seriously under any circumstances,” concluded Glover with an air stinking of self-righteous indignation, “but the problem is that someone may take them seriously.” 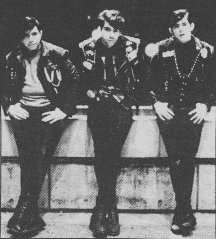 As we cower in the corner of our office, wracked with guilt at the heinous and irresponsible act we’ve perpetrated, we’d like to ask Glover why, in fact, he bothered commenting on the ad at all (especially as the number two news story) if the information was so potentially dangerous?

The answer is undoubtedly that wet-head Joe relished the chance to pose indignant in front of his horrified conservative viewers while also giving them a break from TV 2’s dull nightly reportage of fires, homicides and layoffs.

Along with TV 2 (which also featured the story again the next night) Detroit’s bastion of reactionary thought, The Su... sorry, The Detroit News, covered our farce as well. In a story entitled “A Fictitious Ad Stirs Kidnap Fears at GM,” the News laid out basically the same info as Channel 2, adding only our address, the number of staff members and contributors we listed last month and assorted comments by local law officials and a GM spokesslug.

According to the GM lackey, the ad was “outrageous, sick and terrible” in that order.

Back to Bloomfield Township Police Chief Snell again (who was reached for comment while junketing at a police chief’s convention on Mackinac Island), Snell told the News that he was going to speak to Oakland County Prosecutor/Defender of the Rich, Babbling Brooks Patterson to determine if we’d violated any laws.

“If one has (been violated)” Snell sputtered, “then we intend to prosecute.”

To Snell’s obvious disappointment, we’ve as yet broken no laws. Eager to keep his name before the public’s eye, Patterson did vow that he’d prosecute us for “inducement” should any of the fourteen be kidnapped.

A late arrival and surprise entry in the Fifth Estate media observance competition was the Birmingham Observer & Eccentric, which printed by far the most entertaining article on the subject.

It opened with three tear-jerking paragraphs concerning the perils and problems of the north suburban rich.

“A Birmingham woman tells of friends with two phone lines ... a security in case one gets cut.”

“A prominent area socialite reports on a new subject in conversation, alarm systems.”

“Salary increases might have once meant a lessening of worries. But over the last several years those at the top of the pay scale, the corporate executives, have had to cope with threats or kidnapping.”

The article went on to interview various unnamed “prominent” North suburban women, soliciting their views on the GM ad.

“I think it’s a terrible thing and I’m certainly glad I’m not one of them (people with addresses published),” one was quoted as saying. “I don’t know what can be done about it...This whole anti-establishment bit gets me down.”

The piece-de-resistance came from the wife of a retired corporate auto executive.

“I’ve contemplated many times throwing in the towel and sitting in my home in Bloomfield and letting the world go to hell,” she admitted candidly. “Unfortunately, I don’t believe God intended me to do this.”

Alas, the good citizens of Birmingham are going to have to exert a special effort to obtain future copies of the Fifth Estate. In a move Smacking of political censorship, five retail distributors in the Birmingham area have decided to deny the people of Birmingham access to the FE by refusing to distribute the paper.

Interestingly enough, for all the stir the ad did create (thanks to TV2, the Detroit News and the Birmingham Eccentric), no official statement was made by GM’s directorship; nor was there any mention of the ad in the Free Press. Apparently both institutions saw through the ruse-or might you call it tacit assent?

Although mention was made in both the printed and visual media that the phony GM advertisement was a “political statement,” we’d like to clarify that somewhat if we may. From our end, we figure that if General Motors can keep extensive files on all its employees (files which often go far beyond standard employment information), then perhaps their wage slaves ought to know a bit about their employers-their names and addresses at the very least.

And as for any moral responsibility for the lives of the fourteen fat cats listed, we feel none. As a great philosopher once noted: “You plays the game; you takes your chances.”