New Theatre
Somebody Else: Raving Anarchistic

Two wild Detroit theatre groups combined to open a cozy little theatre on the Southwest side on January 8 and 9. Somebody Else presented their raving, anarchistic “Double Coupon Day Afternoon,” plus other electrifying shorties, and the Acme Theatrical Agency threw in a few firecrackers by way of black-outs, satiric sketches and character assassinations (everyone’s favorite pastime). 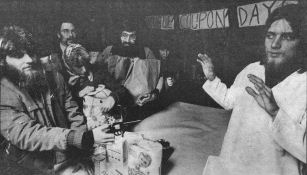 The new theatre is called Easy Space and is near Mexican Village Restaurant on 18th and Bagley. It was started by people from that area as an alternative place for performers who are not glittered and glamoured and who retain an authenticity as far as politics and communal awareness go. Unconcerned by much of the commercial and artistic pretense that haunts our more “legitimate” and “respectable” theaters with such incurable morbidity, Easy Space is clearly a place to do some knee-slapping and raise some hell.

“Double Coupon Day Afternoon” is a play about two desperate characters who pull guns in a supermarket and force the manager and workers to give food away for free. There is an extensive political dialogue arising from the confrontations as expressed by some of the consumers’ hesitance about “stealing,” the duty of the workers in the store, and the anarchist outlook of the gunmen. The cast enriched the play in many places with a variety of characters that pop up in the store and a palatable handling of props. The play is a veritable dream that everyone must have from time to time, and except for some uneven acting performances on occasion, the presentation was a knock-out.

The Acme Theatrical Agency demonstrated their ability to blast in short sketches impregnated with unpretentious insight and decapitating humor. With hardly any props or costumes, the Acme group seem as people possessed and with no exorcist in sight. Unfortunately, much of their material has been seen many times before, which testifies more to the difficulty of developing in Detroit’s sterile facilities than to any lack of imagination.

The audience cared little, though; the performances were inspired and they were in an uproar during the entire show. All considered, the performances by both groups demonstrated that the most relevant (and by far the most interesting) theater in Detroit occurs on the bad side of the tracks.