The Battle at Brockdorf
First Person Account from W. Germany 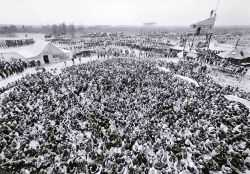 Staff Note:</em> The following is a first-hand account of the demonstration and events leading up to it. See also in this issue: West German Protest.

BROCKDORF, Germany (LNS)—Up to now we have used only legal ways—filing lawsuits and so on—but have always made it clear that if legal means didn’t work, we would occupy the site, as was done in Whyl.

Of course the government and the concerns which want to build the reactor knew that, and so at 1:00 a.m on October 26, about 800 policemen and workers arrived at the site of about 100 acres (to begin fortifying it).

Immediately they drew a special barbed wire a round the site; we call it NATO wire because it is only used for military purposes and because it has little blades that do not stick, but make cuts. They pulled 3 rolls all around the site, erected lamp posts near the wire and began to dig a ditch encircling the site. By the time we learned over the radio that permission to build the plant had been given, the site looked like a fort.

The next Saturday (October 30) was a demonstration of 8,000 people, and probably because the police were overconfident of their fortification, we managed to pull the wire away, cut it, and occupy the site. Of course, we were prepared too: we had heavy cutting tools for the wire, and carpets to throw over it so we could walk on it, and timber to build bridges and ski-glasses or swimming goggles to protect us against tear gas.

The occupation was declared an “action without violence” which Meant especially no violence against people: policemen, guards, etc.

At first we were only 300 people on the site, and the police appeared on horses and it was a critical situation. But we called to the others, “Don’t leave us alone. Come join us,” and one after another dared and were welcomed with applause and kisses and embraces.

One 60-year-old lady who came over had to be led because she couldn’t see very well. That example encouraged lots of younger folk. In total, about 2,000 to 3,000 people dared to enter the site. Meanwhile, police and workers pulled the NATO wire around the part we had taken. On it fires were lit. There was music and dancing and the mood was: we have made it.

Once we were on the site, a clergyman had made a sort of armistice with the police chief for that day and night, and so we fetched tents and sleeping bags from our cars and began to build a camp. But by the time night came and camera and TV teams had left, as well as a lot of demonstrators, there were only about 800 people left on the site. We realized that the ring of police around the camp grew and that they would probably start something.

As we were non-violent, we all sat down on the ground and thought the police would perhaps carry us away, but the line of policemen approached like robots, threw tents which were in their way into the fire and when they were 1 to 2 meters away from us, they fetched their chemical mace (CM) spray cans and sprayed on the sitting people. They even came closer and sprayed the mace—which can blind you—directly into the faces and eyes of the people.

One policeman sprayed it into my face from the side, from a distance of 20 to 30 cm. I felt the pain and could not open my left eye. All around me people were crying in pain. I heard one policeman kicking the people who stumbled around because they couldn’t see, and he was laughing, “You knew that was waiting when you entered the site.”

In clearing the site, police injured many of us and seventy were arrested.

Politically, the behavior of the police radicalized a lot of people. The next day, Sunday, 2,000 people demonstrated, more or less as a spontaneous reaction to the events of the day before. Most of them were people from the neighborhood around the site who had not been in the demonstration the day before. Even the bourgeois press were more or less on our side—condemning the police, but not objecting to nuclear power of course.

Two weeks later we had decided was the time for a second attempt. In the meantime the site was secured on two sides with concrete walls two meters high, and on top of them a lattice-work with NATO wire on top. The other two sides had been secured by trenches with water in them and they were up to 8 meters wide.

That Saturday, November 15, over 30,000 people came. Police had closed all the roads so that people had to walk 6 to 8 kilometers to get to the site. Lots of us were well prepared again, this time with motorcycle helmets, equipment against tear gas, waterproof clothing and tools, wood, etc.

There were about 3,000 police on the site and they had tear gas and tanks which threw water, as well as four helicopters for throwing tear gas and spraying chemical mace. And they used all their stuff from the very beginning. So people worked from 2 p.m. till 6 p.m. in clouds of tear gas and splashing water. Soon it was obvious that it would not be possible to occupy the site, but we wanted to make as much damage as possible.

By evening we had taken away the NATO wire in several places; there were bridges across the moat, and holes in the latticework. But behind each hole stood a few hundred police. So we withdrew.

In all about 70 police were injured by stones; and about 300 demonstrators had to undergo medical treatment because of tear gas, getting wet and cold or injuries—from stones the police threw back. One guy who was hit by a stone and was not wearing a helmet got a brain injury.

Water tanks were damaged by stones, one by a molotov cocktail; an armoured police reconnaissance car was thrown into a small ditch.

Since then a lot of people have heard of Brockdorf and discussed it, and at least wonder why the government has to protect the site with police if “it’s only for our best” as they say. Another reason why we got a movement as big as we are now is for sure the general dissatisfaction with the repression in West Germany.

There will be another try to get on the site, and in the meantime, slowly sabotage starts. A lorry with concrete for the site was stopped and its tires and brakes damaged. We will publish a list of all the companies which are involved in building the power plant, so one can do sabotage whenever one sees a lorry, a machine or whatever of this company.

But police and government aren’t sleeping either. They brought the first charges against some of our people because of breach of domestic and public peace, probably conspiracy. We’ll see.