Latest Crises in the Family

“The development of capital is delinquency and madness. Now everything is permitted; there are no longer taboos, bans. But, in living out various ‘perversions, men and women can lose themselves, destroy themselves, and no longer be operational’ for capital; out of this there appears-the necessity of a community which can reinsert them into the community of capital (to be more exact, this takes on the dimension of a therapeutic community). An ensemble of specialists-therapists will serve as the mediators for this reinsertion.”

The revolt against work—which has received considerable attention in previous issuesof the Fifth Estate—can be seen in the larger context of a “crisis of participation” for capital. This crisis is reflected in all realms of human activity—in the schools, in the voting booths, on the streets of all cities, in social and sexual behavior, as well as at the workplace. 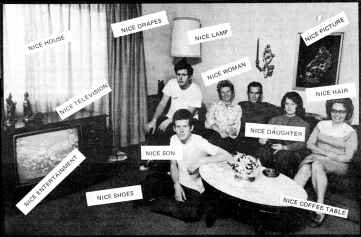 Those of us who watched the election returns in November saw TV news commentators boast of high voter turn-out, only to discover the next day that more people had not voted at all than had voted for either Ford or Carter.

Indeed, the question of “participation” and “turnout” was one of the issues the candidates raised time and again during the campaign. More and more politicians now recommend that official voting registration be done away with, to be replaced by automatic conferral of the right to vote upon merely showing up, at the polls. “Participation” is now quite clearly a greater problem than fraud, which had initially motivated registration “reform” in the early part of this century.

Similarly, the much publicized campaign for President of the United Steel Workers’ Union saw more union members not vote at all rather than vote for Sadlowski or McBride. In the schools, teachers continue to decry the lack of interest manifested by students.

A “socialist” teacher wrote to Monthly Review in January of this year:

“The cynicism of students is of serious concern to those of us who are interested in preparing them to act responsibly for social change in their own behalf. We see youngsters of thirteen and fourteen turned off by the (admittedly trivial) practice of student organization, going on to express total disinterest in registering to vote at age eighteen. At the younger age they are already dominated by the anarchic principle that they are not going to trust any member of their own group to preside over them or to represent them for any purpose whatsoever.”

The threat posed to social order on the streets of Detroit by the black gangs has generated attempts to integrate gang members into “constructive” activities. In other cities, similar threats are being met with plans for a new “youth conservation corps”, in which unemployed youth will clean the environment despoiled by industrial producers, in the hopes that they will learn the “work ethic” in the process.

Chicago’s Jesse Jackson has advocated that black parents force their kids to toe the line in school, thus demonstrating that his organization “People United to Save Humanity” (PUSH) should be renamed “People United to Save Capital.” Not surprisingly, his speeches to high school students are often greeted with boos.

Latest Crises in the Family

Along with these manifestations of a crisis for capital in the schools, in “politics”, at the work-place, and on the streets, there has grown the appearance of crisis in that time-honored institution; the family. Recent governmental studies have detailed a staggering increase in the last ten years of divorces and cohabitation, accompanied by an equally staggering decline in marriages and birth-rates.

While Carter can attempt to use his power to force family stability—by telling HEW employees to stop “living in sin” and get married, by telling his cabinet members and advisers not to work so hard that their family life suffers, by suggesting reforms in the income tax laws to reward married couples and penalize single people—a far more subtle and sophisticated program is being developed by those persistently faithful servants of capital, the therapists.

It should not be surprising that it is in this area—the family—that the most sophisticated efforts are being concentrated to counter the “crisis of participation.” On the one hand, the family has long been a crucial cornerstone of the domination of capital, and many other earlier forms of domination as well.

It is here that labor power is physically reproduced for capital, that capitalist social relationships are reproduced (inheritance/property relationships; socialization of children/obedience to authority; sexual division of labor/dual labor markets and broad-based divisions within the working-class; personal domination: husband over wife, parents over children/recreation of hierarchy; and so on). Even as the long arm of the state has stripped away numerous earlier functions of the family (schools, courts, welfare and social service agencies, etc.), the crucial core remains—it is here we first learn and internalize the practices of hierarchy, domination, submission, and the redefinition of individual desires into institutional needs.

On the other hand, while few of us expect to find any satisfaction at work, at school, in “politics,” or on the streets, we do indeed hope to carve out some happiness at home. Despite its penetration by the market and its values (rent, food commodities, consumer “goods”, TV, radio, limitations on our time due to jobs, etc.), the home remains a sphere where we can try to shape our social relationships to our (collective) satisfaction.

It is this desire for humanness, for satisfactory social relationships, in the context of the apparent failure of the family as a social institution and the search for alternatives (see “Communal Living” in the March Fifth Estate) which has led capital and its therapists to some new perspectives on the “problem.”

The new family therapy, of course, does not part company with the tradition of all therapy in seeing “problems” in terms of the adjustment of people to society. Yet, most therapists had thought in terms of the individual and his/her mental processes, which had to be altered. Recently, however, family therapists have caught on to the vogue of “systems theory” and even some aspects of Marxism or earlier “radical” therapy. In short, they have moved away from the traditional focus on the individual as the unit of treatment. A number of “relationship-based therapies” have developed, which attempt to define and treat “disorders” as aspects of social relationships rather than as diseases “inside” an individual. Their main concern is to find ways to reduce “stress”, the “illness” which is increasingly seen as the root cause or major contributing factor to many physical, mental and social disorders—from asthma to schizophrenia to low productivity to random violence or even cases like that of James Johnson, the Detroit autoworker who was acquitted of murder after killing a foreman and a job-setter because he was adjudged not “responsible” for his actions.

These family therapists, who view the family as a “system” with a number of “sub-systems,” have developed a series of strategies for reducing stress generated within that network. They meet with all members of the family, “becoming” a “member” themselves, and seek to alter patterns of relationships within that family. Their goal is to so re-organize that family that all members are “healthy”, i.e., able to play a “productive” role within society.

Each individual must fit within the family “system” and “sub-systems”, and at the same time have enough “autonomy” to engage in activity outside the home without encountering constant disruption from the home environment. In other words, these therapists recognize that the family itself can become a source of “stress”, rather than a source of stability and security.

However, several of these therapists have also recognized that many causes of “stress” may come from outside the family. In this light, they have developed a somewhat more complex strategy.

First of all, the family is still seen as the framework within which these “problems” must be resolved. Thus, their strategy remains geared to the family as the foundation. But they then cast their nets wider, drawing in possibly dozens of additional people, who are the “significant others” in an individual’s daily life—fellow workers or students, teachers, foremen, bosses, welfare case workers, ministers, cops, etc.

In short, the whole network of social relationships into which the individual directly enters, any and all of which may generate “stress” and resulting “disorders,” become the province of the therapist. There is no attempt to disguise or suppress “conflict;” rather the therapist helps the individuals involved to find ways to “negotiate” their conflicts. They may even encourage the articulation of “conflict” so that it will become “manageable.”

One article on this new “ecological approach” describes some of the processes used:

“It may mean little more than an attempt to improve coordination among various agencies affecting or trying to help a particular individual or family, thereby forestalling the cross-pressures that often fall on a family involved with a number of social agencies. One advocate of this approach will call an “inter-systems conference” including the extended family, possibly friends, and representatives of all systems in the community with an interest in family members, such as teachers, welfare workers, police, clergy, etc. They exchange information on how each system sees the family and its problems, what they have been trying to do. Then the family is drawn out on how it sees its needs. Differences among these various approaches are brought out and, if possible, resolved. A plan is made on the basis of a consensus of those concerned, and specific tasks assigned. A chairman elected to coordinate their carrying out.”

A major theme of all this sort of therapy is that the individual must come to “feel” that he/she can “control” his/her immediate environment, that he/she has the resources to “cope” with stress-generating problems. Thus, one tactic becomes the carving out of a realm in which the individual can be “free to act without random interference.”

In short, this new family therapy, especially its “ecological approach”, seeks to respond to the “crisis of participation” by finding areas in which the individual can “participate”, perhaps even “control” his/her situation in that area, to counter the growing alienation from all institutions.

This is surely not to imply that this new therapy will succeed, that it is capitalism’s ace in the hole.

Nor is it to imply that we must celebrate personal and social disorganization as the path to the future, for here we are discussing real human beings at incredible depths of misery and anguish, as well as our own alienation. But it is significant to point out the degree to which capital is developing a fairly unified strategy for confronting the problems it now faces in all realms of social life.

In this sense, capital’s drive for the “domestication” of human beings (see Camatte, The Wandering of Humanity) has generated such widespread apathy, cynicism, and personal and social disorganization that it has itself now become a problem for capital. Capital’s answer, in the new family therapy, fits with other schemes such as “participation” or “workers’ control” (see Negation, Lip and the Self-Managed Counter-Revolution), “democratization” of unions, “reforms” of voter registration, and similar schemes on the streets and in the schools.

We will continue to be invited to “participate” in our own exploitation, alienation, and misery until we find a way to destroy the whole damned thing and create a new way of life for ourselves.