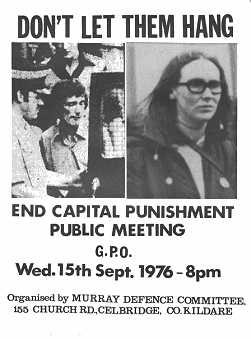 In the most recent development in the Noel and Marie Murray murder trials, Marie has been sentenced by the Special Criminal Court in Dublin to life imprisonment after being found innocent of capital murder, but guilty of shooting policeman Michael Reynolds on September 11, 1975 following a bank robbery.

The decision of the three-member court, with a Justice Hamilton presiding, to find Marie not guilty of capital murder (a charge covering the murder of law enforcers) meant the difference between life in prison and death by hanging. Hamilton said that although he was satisfied that Marie Murray had shot the Garda Siochana (police), he did not feel that it had been established by the prosecution that she had known that he was a police officer.

The juryless trial was a sham (as had been the first one the Murrays were subjected to), depending mainly on a pistol seized from the Murrays’ house after their arrest a month after the robbery and a signatureless confession that Marie had been coerced into making. She denied the validity of the latter, stating she made the statement only to stop the beating of her husband, Noel, by police.

The Murray defense argued that the revolver in question was illegally seized, and during the trial a Garda ballistics expert was unable to identify the caliber of the gun used to kill Garda Reynolds.

Still, even with the main prosecution evidence in grave question, the three agents of Irish “justice,” brought in a verdict of guilty, sustaining in many’ minds the contention that the trial was really a witch hunt against anarchists.

One final legal procedure remains; an appeal on the basis that both of the Murrays were held illegally following their arrest, and not brought before a magistrate in the proper amount of time. It was during this period that the “confession” was forced from Marie. The Dublin Murray Defence Committee is hopeful that Marie will be released on bail pending the appeal.

Throughout the whole ordeal, the use of physical and mental torture on the Murrays and their comrade Ronan Stenson by the Irish police has been never ending, beginning with the brutal physical beatings upon their arrest to months of solitary confinement.

Rita O’Hare, a recently released inmate at Limerick Prison where Marie is being held described Marie’s death cell as three meters by two, with a toilet in one corner and in the constant presence of two police who also shared the same toilet.

The brutality inflicted upon Stenson was even worse. In a personal account of his arrest and interrogation, Stenson wrote that he was continually beaten with fists, hammers, belts, batons and ropes, lifted by the hair and told by detectives that he would be killed if he didn’t confess.

After a year in prison, a year which resulted in his suffering serious disorders as a result of his treatment, he was released without charge.

The Dublin Committee reports that both Marie and Noel remain in good spirits, buoyed by the international demonstrations and appeals demanding their release. The Irish Times of April 30, reported that Marie was “still composed when the verdict and sentence was announced. As she was led from the dock by two prison warders, (she) waved to relatives in the public gallery, and among a number of people who waved back were her husband’s parents.”

The Murrays may be written to, although the Dublin people suggest registering the mail, since the Irish authorities permit only about 25% of the mail to reach prisoners. Marie’s address is Limerick Prison, Limerick, Ireland and Noel’s is Curragh Detention Centre, Curragh, Co. Kildare, Ireland.