Deal Between Clamshell and Co. 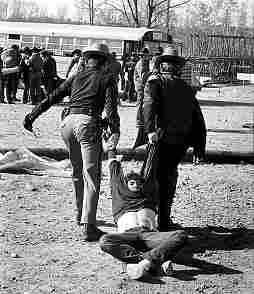 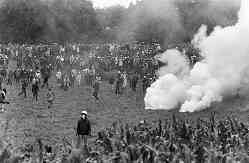 Contrasted with the U.S., European anti-nuclear demonstrations often result in violent clashes with police. Scene above (l.) shows a Clamshell demonstrator practicing nonviolence being dragged away by a New Hampshire State Trooper, May 1 at Seabrook, At right, part of a contingent of 30,000 who tried to march on a plant site at Creys-Malville, France, July 31. One demonstrator was left dead and a hundred others injured after police attacked, trying to block access to the plant. French Interior Minister Christian Bonnet issued a statement saying, “About a fifth of the demonstrators were foreigners. Among them were about a thousand troublemakers, indisputably anarchist in action and inspiration who ignore frontiers and who already have made trouble elsewhere, especially in West Germany.”

I, and many others, have kept quiet about our bad experiences with the Clamshell Alliance, because we want to see nuclear power (and nuclear armaments!) shut down forever. Liberal/conservative demonstrations against the Seabrook plant seemed better than no demonstrations at all. But to see the Clamshell being mentioned so frequently, and in such uncritical fashion, by an anarchist communist paper is a bit too much!

The Clamshell Alliance has nothing to do with mass direct-action occupations. Though they constantly refer to the victories in the European nuclear occupation movement, and pretend to carry on in the same tradition here, the last thing they want to see is a militant occupation at Seabrook.

Last fall I and other comrades helped push for an open occupation in the Clamshell’s region-wide “action” committee meetings. By an open occupation I mean one in which anyone who comes is welcome to participate, regardless of whether they have undergone the non-violence training. By an overwhelming margin the action committee, made up of “representatives” from the six-state region, approved an open occupation.

This would have made joint action by pacifists, environmentalists and leftists possible. But the self-appointed Clamshell coordinating committee, dominated by respectability-at-any-price Quakers and their fellow travelers, said the action committee had overstepped its mandate. There was to be no open occupation at Seabrook, the coordinating committee informed us.

The action committee backed down, so we walked out of the organization. Rebelliousness continued to surface periodically within the Alliance, but was always quashed by “stopping the nuke is the most important thing, isn’t it?”

By the time of the April 30 demonstration the non-violence ideologues had a complete grip on the Clamshell Alliance. The “Occupier’s Handbook” supplement had 9 rules listed on the front, with the statement: “[These rules] cannot be changed during the Occupation action.” The rules included the following:

During the non-violence “preparation” (renamed from its original “training”) people went through role-playing exercises where they turned over “provocateurs” (e.g., someone cutting a fence) to the police. “Occupiers” who brought cameras were encouraged to photograph any such provocative behavior, so that later identification, and distinguishing from Clamshell people, could be made.

Not only does the Clamshell go out of its way to cooperate with the authorities, they have an absolute fetish when it comes to protecting property and property rights. Odd, for a group calling for an “occupation.” They decided, before April 30, that if the whole site was fenced in, they would just have a sit-in in front of the main gate.

As one Boston Clamshell organizer explained, “Cutting a fence is an act of violence,” which would violate their fundamental commitment to non-violence.

Our affinity group could not stomach this conservative horse-shit and stopped having anything to do with the Clamshell Alliance. But in April we decided it was unbearable to let these non-violentists set the terms of what an occupation was and was not. We met with several Boston area Clam heavies (two of whom are American Friends Service employees) to tell them we planned to participate in the occupation, without their training, as an autonomous group.

We demanded representation on their decision-making bodies and all tactical information being given to other affinity groups. They told us that this was impossible. We would not be considered a part of the Clamshell occupation, and so would be denied legal and logistical support, information and representation. Furthermore, they admitted to us, that their, and the media’s, use of the term “occupation” was somewhat “misrepresentative.”

They claimed that the April 30 demo was really a “civil disobedience action whose goal was an occupation if that was possible”...that is, if the cops allowed them. The lying dogs leading Clamshell have never intended a real occupation, yet each time (August 1, August 22, April 30, and no doubt in the future) have billed their symbolic civil disobedience as a mass occupation in order to cash in on everyone’s excitement about the genuine direct actions at Wyhl and elsewhere in Europe.

Deal Between Clamshell and Co.

Fortunately for Clamshell, the cops did allow them their “occupation” April 30. Clamshell and PSCo lawyers worked out a deal temporarily pulling back the boundaries of the court’s injunction to cover only the fenced-in core construction area. Clamshell did its part, keeping its “occupiers” from climbing or cutting the fence.

The whole thing was nice and orderly, a media event, an appeal to ruling class sympathies. (“Speak reason to power,” the Quakers say.) Direct action means you’re not asking anyone’s favors—you’re taking things into your own hands. Unless the consciousness and methodology predominant in the Clamshell Alliance are defeated, direct action will never be a part of the anti-nuclear movement here.

For peace, not the ideology of peace For a genuine occupation movement For an end to nuclear society

On the 3rd of August, Michigan’s Safe Energy Coalition (SECO) sponsored a meeting and talk by Harvey Wasserman, national spokesman for the Clamshell Alliance, to drum up support for its August 6th demonstration at the site of Fermi II, the controversial nuclear power plant being constructed in Monroe, Michigan.

The evening began with an hour-long film co-written by Wasserman which documented the origins and rise of Clamshell, from the attempt of 18 people to plant trees at the Seabrook nuclear plant site to the arrest of 1,400 persons there last May. Unfortunately, the presentation contributed no greater understanding of the perils of nuclear energy (which, considering the audience’s apparent lack of background, would have been helpful) and served as little more than an entertaining vehicle for the Alliance.

The movie was followed by a short talk by Wasserman, whose glaring naivete and absolute lack of any analysis of the role of capitalism in the proliferation of nuclear power rendered his speech virtually valueless. At one point he waxed enthusiastic about the staggering employment possibilities of “mass producing” solar energy, conveniently neglecting the consideration of who would be controlling this production.

Toward the end of the question and answer period, when asked by an FE staffer whether Clamshell had indeed excluded groups and cooperated with the police as Rudy Perkins (see above article) had charged, Wasserman responded with a ‘yes’ to both, suggesting that if the questioner wanted to have a violent demonstration he could have one of his own. Adamantly stressing the principles of non-violence, Wasserman even went so far as to blame “radicals” for ruining the recent demonstration at Creys-Malville, France because of their attack on the police.

“The police are not the enemy,” Wasserman insisted, totally ignoring the role of the police as the strong-arm of the State and hence protector of corporate property. Our staffer, in turn, accused him of repeating the bullshit lies of the capitalist press and told him we thought that those who turned in people were cops as well. He simply shrugged and scanned the room for other questions—questions easier to answer.