A Footnote (And A Warning) 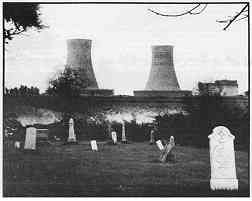 Eleven years ago an accident at Detroit Edison’s Fermi 1 nuclear power plant in Monroe, Michigan, almost destroyed Detroit. If you accept the utility’s own commissioned study, the death rate could have been as high as 133,000 dead in the metro area and that does not include 181,000 people exposed to such high radiation levels as to develop leukemia or other forms of cancer within ten years. The Atomic Energy Commission’s own study projected an additional 73,000 injured and $17 billion in property damage.

Despite the near-miss with death and destruction, there was no public outcry because at that time people were never told of the danger.

The first event is that with the publication of We Almost Lost Detroit by John Fuller, the story of Detroit Edison’s Fermi 1 nuclear power plant has finally reached the public.

The second event is that some people are beginning to react. An example is that Detroit’s No-Nuke group, the Safe Energy Coalition (SECO) has called for a protest March and Utility Bill Burning Rally at Kennedy square at 12 noon, Saturday, October 15. The rally will be directed against Detroit Edison’s decision to construct another nuclear plant in Monroe.

The two above events are not unrelated. To under-Stand the eleven year delayed reaction, it is helpful to read Fuller’s We Almost Lost Detroit. The book is well-researched and documented, exciting, even full of suspense, but mainly it’s an expose of the Big Lie. It’s the story about how dangerous and dirty that “safe, clean energy” really is, and how a near catastrophic accident was hushed up.

The author successfully captures the spirit of the times. It was the beginning of the New Era of the Atomic Age. In 1951 the government had just generated electricity from atomic energy when, using a reactor, they had lit up four 100-watt light bulbs. Private capital, fearing government encroachment on energy production, was eager to master the new art. By 1952, Detroit Edison’s Walker Cisler had created a Nuclear Power Development Department, and was eager to bring private investment into an atomic project to show that the private sector meant business and “could do a better job than bureaucracy in developing the promise of nuclear power.”

And it was a time of promise. Belief in technology was unquestionably high: The project was looked at as being similar to a civilian Manhattan project. True, it was extremely dangerous. That was a problem—but these men were engineers; they were problem-solvers. They were the best and the brightest and they had generous budgets.

Besides, the rewards were magnificent. To be the first to harness the atom, to build a machine that would make its own fuel, to meet the challenge which would not only bring immense profits, but immense benefits for society as well, was a vision not to be denied. Vision and engineering would meet the challenge.

Fuller proceeds to describe graphically in layman’s terms just what dangers were being challenged. Using the Fermi accident as a vehicle, Fuller describes all the accidents, near-disasters and other pratfalls of the development of atomic energy. The reader learns that keeping an atomic volcano at high simmer just below the boiling point is a tricky and highly risky business.

One learns through the course of the book that peaceful atomic energy is not a “safe, clean energy” and that both the government and the nuclear industry have been covering up dangers and promoting the Big Lie.

Eleven years later, the public is starting to get the story. The Clamshell Alliance occupation of the Seabrook, New Hampshire nuclear power plant last Spring triggered off the formation of other no-nuke alliances. One of them, the Trojan Decommissioning Alliance of Oregon, has called for a civil disobedient occupation of the presently operating Trojan nuclear plant on the day after Thanksgiving.

Here in Detroit a group of people, impatient-with writing to Congress, have come to the conclusion that the government won’t help. In fact, since 99% of the radioactive wastes stored in the country comes from the government, they feel the government is the greatest transgressor.

One of their events will be on Saturday, October 15, the 11th year anniversary of the Fermi 1 accident.

Assembling at Grand Circus Park at 11 a.m., they will march via Washington Blvd. and Michigan Avenue to a noon rally in Kennedy Square. One of the actions at the rally will be a mass burning of Detroit Edison utility bills to protest Detroit Edison’s decision to build its Fermi 2 nuclear plant. They will be protesting the construction of the plant, part of a suicidal path being foisted upon them by corporate interests that favor investor profits over human well-being.

With each passing week, with continuing reports of nuclear plant malfunctions, operational leaks, missing plutonium and radioactive waste storage disasters, the evidence continues to verify that nuclear power is intolerable on strictly safety terms. They will protest the health costs both to themselves and future generations. Also, they will be protesting the costs of further large electric rate increases.

Future plans for the group include a civil disobedience occupation of the Fermi 2 site next Spring. As one representative of the coalition points out, “We do not want merely to protest nuclear construction—we want to stop it. Our action should not be for show. If we fail, it will not be because we lack intent, only numbers. And the next time we will be back with more numbers.”

Voicing such opinions, some people are finally reacting to the news published in We Almost Lost Detroit. Hopefully, it’s not too late.

Those who wish to contact SECO about the demonstration can call TR 2–4024.

A Footnote (And A Warning)

The Safe Energy Coalition (SECO) is a broadly-based, loose coalition which meets in private homes and encourages the formation of local groups, some of which have been established in places such as Allen Park, Romulus, Westland and other areas. There is no real leadership and little organization. SECO supporters advocate every possible strategy for an anti-nuclear struggle from direct action and occupations to inviting sleazy politicians like Coleman Young to speak at their public forums. Political hacks, such as the Socialist Workers Party, have (in their own jargon) “intervened” in the movement undoubtedly in hopes of transforming such a movement into an SWP-led “peaceful, legal” pressure group and a recruiting ground for their party along the lines of its activities within the U.S. anti-Vietnam war movement. So far its results have been minimal and unimpressive.

We hope that as many people as possible will participate in the demonstration on October 15. We plan on being there since we wretch with fear and hatred when we consider any form of nuclear power, and secondly, since we applaud wholeheartedly the burning by human beings of utility bills, identification cards, money, and all such paper appendages of capital. Humans danced upon this planet for 50,000 years without billfolds full of paper. It has only been with the rise of the centralized state, and particularly with the most recent emptying of human content by the repressive modernist evolution of authority and domination, that we have been given “identification” ‘cards. These cards and other aforementioned clutter only exist to remind us of our false and self-negating pseudo-identities as well as to let the cops know “who” and “what” we are within capital. Burning ID cards is just a shot away from burning false identity, representation, and authority. Burning utility bills is just a kiss away from burning down the utility companies with the techno-corporate bureaucrats inside.

Also, a warning. Movements for liberation succeed up until the moment in which they come to let politicians, who are only the spectacularized images of anonymity, speak for them. Be they Coleman Young, or “socialist” snoids, we will not allow politicians to “speak for,” “represent,” or “lead” us. Our hatred for and terror of nuclear power surges from our most spontaneous animal responses, and we won’t trade our LUST FOR FREEDOM AND WILDERNESS for their dry, suffocating realpolitik.

If politicians speak on October 15, we hope that as human animals no one listens any more than they would listen to street noise and sirens. Continue the demo, sing, shout, dance, play music, talk in magic languages to the coyote wandering through the crowd, but don’t be silenced by politicians.

For us, the struggle against nuclear power is only the beginning. We won’t be satisfied until we succeed in re-inhabiting the planet. Dance on, Coyoteman!