COMING SOON TO A THEATER NEAR YOU 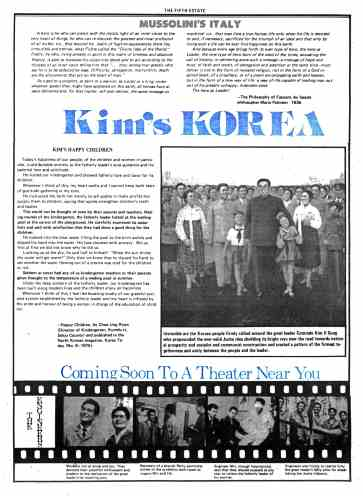 “A hero is he who can pierce with the mystic light of an inner vision to the very heart of things; he who can re-discover the greatest and most profound of all truths: viz., that beyond his realm of fugitive appearances there lies, immutable and eternal, what Fichte called the ‘Divine Idea of the World;’ finally, he who, living already in spirit in this realm of timeless and absolute Reality, is able to translate his vision into deeds and to act according to the dictates of an inner voice telling him that ‘...they wrong man greatly who say he is to be seduced by ease. Difficulty, abnegation, martyrdom, death are the allurements that act on the heart of man.’

“As a god or a prophet, as saint or a warrior, as a poet or a king; under whatever aspect they might have appeared on this earth, all heroes have always delivered and, for that matter, will ever deliver, the same message to mankind: viz., that man lives a true human life only when his life is devoted to and, if necessary, sacrificed for the triumph of an ideal and that only by living such a life can he ever find happiness on this earth.

“And because every age brings forth its own type of hero, the hero as Leader; the new type of hero born of the need of the times, answering the call of history, in delivering anew such a message—a message of hope and trust, of faith and revolt, of abnegation and assertion at the same time—must deliver it not in the form of revealed religion, not in the form of a God inspired book, of a prophecy, or of a poem encompassing earth and heaven, but in the form of a new way of life: a way of life capable of leading man out of his present unhappy, miserable state.

“The hero as Leader!”

—The Philosophy of Fascism, by fascist philosopher Mario Palmieri, 1936.

Today’s happiness of our people, of the children and women in particular, is attributable entirely to the fatherly leader’s wise guidance and his paternal love and solicitude.

He visited our kindergarten and showed fatherly love and favor for its children.

Whenever I think of this, my heart swells and I cannot keep back tears of gratitude gathering in my eyes.

He instructed the farm not merely to sell apples to make profits but supply them to children, saying that apples strengthen children’s teeth and bodies.

This could not be thought of even by their parents and teachers. Making rounds of the kindergarten, the fatherly leader halted at the wading-pool at the corner of the playground. He carefully examined its water hole and said with satisfaction that they had done a good thing for the children.

He looked into the clear water filling the pool to the brim awhile and dipped his hand into the water. His face clouded with anxiety. But at first at first we did not know why he did so.

Looking up at the sky, he said half to himself: “When the sun shines the water will get warm!” Only then we knew that he dipped his hand to see whether the water flowing out of a crevice was cold for the children or not.

Seldom or never had any of us kindergarten teachers or their parents given thought to the temperature of a wading pool in summer.

Under the deep concern of the fatherly leader, our kindergarten has been built along modern lines and the children enjoy all happiness.

Whenever I think of this, I feel like boasting loudly of our grateful socialist system established by the fatherly leader and my heart is inflated by the pride and honour of being a worker in charge of the education of children.

Photo description: A crowd of smiling adults and children surrounding the Great Leader.

Photo caption: Invincible are the Korean people firmly rallied around the great leader Comrade Kim Il Sung who propounded the ever-valid Juche idea shedding its bright rays over the road towards national prosperity and socialist and communist construction and created a pattern of the firmest togetherness and unity between the people and the leader.

COMING SOON TO A THEATER NEAR YOU

Frame 1: (two smiling men) Min & Sik full of pride and joy. They devoted their youthful enthusiasm and wisdom to the realization of the great leader’s far-reaching plan.

Frame 2: (several men) Secretary of a branch Party committee comes to the synthetic tank room to inspire Min and Ho.

Frame 3: (man with bandages on head and body) Engineer Min, though hospitalized, says that they should succeed at any cost to relieve the fatherly leader of his worries.