The Eat The Rich Gang 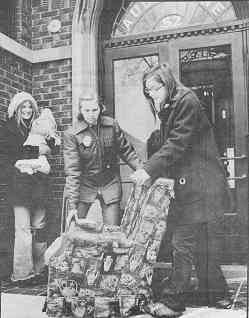 NO MEN HERE! Usually the scene of anger and tears, an eviction is carried out smoothly, with no hard feelings, at a Detroit apartment building. Wayne County Circuit Court bailiffs, Ruth Rath and Beatrice Armour (with chair) carry out the furniture of Wanda Waif (left) from property owned by a group of women bankers. Asked about the incident, Wanda said, beaming, “I’d really be pissed off if men were doing this to me.” Photo by Tom Giacoma

MS Magazine caught up with Gail Garrot as she emerged from the stone-grey headquarters of the Detroit Police Department located in the center of the Motor City’s dreary downtown section. 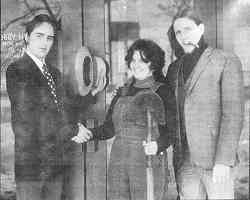 ANOTHER FIRST! Proud as punch, Sally Sheis is the first woman shit-shoveler for the Freidan-Steinem Manure Company of Flint, Michigan. Accepting congratulations from owners Albert Freidan and Lawrence Steinem, Sally says, “I know I can handle the job.” “We’re ready to hire anyone as long as they can shovel shit,” says the management about their new anti-discrimination policy. One sour note came during the otherwise festive event when a wild-eyed young woman had to be dragged off by police for trying to disrupt the ceremony by passing out some unintelligible leaflets while yelling, “All wage work is shit!” Photo by Tom Giacoma

It was Gail’s first day as a big city cop and her sense of accomplishment showed in her beaming smile as we introduced ourselves. She agreed to talk with us and we drove over to the Code 30 Restaurant, a local police watering spot, in the Sentinel Building on East Jefferson.

Up until the Federal Court order of U.S. District Judge Karl S. Misog, women in the Department had been assigned only to clerical work and to crimes involving women and children.

An anti-discrimination suit brought by the local chapter of NOW changed all that and on Nov. 1, 1974 a reluctant Police Commissioner Philip Tannian appointed Gail as the Department’s first female regularly assigned member of the Interrogation Squad of the Prisoner Induction Center.

Over a vodka martini on the rocks (stirred, not shaken), Gail began to unwind from the day’s pressures and started talking about her feelings

MS: Gail, how was your first day on the job?

Gail Garrot: It went surprisingly well. I got a lot of wolf whistles and stares, but I expected that and just went about the work I was hired to do.

MS: What do your job duties entail? 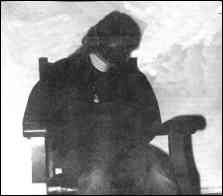 WAITING FOR GAIL! Restrained in the Detroit Police Prisoner Induction Center, an uncooperative, self-proclaimed revolutionary waits to be “interviewed” by Gail Garrot (see interview above). The woman, who refused to identify herself to police, was apprehended with seditious material at the Freidan-Steinem Manure Co. Her leaflet read in part: “Although women constitute an especially oppressed group under capitalism, ultimately their goals are no different than any other sector of the population--the abolition of the wage system, destruction of the political state and the end of all authoritarian relationships and institutions. For women to continue a struggle within capitalism as a special group, seeking merely to achieve the alienated status of men, not only is foolish on the face of it, but continues the spectacle of rival groups competing for the crumbs of a decadent society. Only total revolution will bring about the liberation of women--all else perpetuates their enslavement.” Photo by Mark Centkowski

GG: Well, you know how bad things are in Detroit. Sometimes criminals or dissenters who are caught red-; handed in some anti-social act refuse to sign statements confessing their guilt when they’re brought into the Prisoner Induction Center. It’s my job to “persuade” them, as the guys call it, into signing a confession.

MS: What methods of persuasion do you use?

GG: I don’t want to sound unsisterly, but that’s departmental classified information and I’d have to get an OK from the Commissioner about that one before answering. I hope you understand.

MS: Oh, sure. Were you successful on your first day?

GG: Yes! As a matter-of-fact, I had three felons and two dissenters confess to their criminality today. I felt it was terribly important to make a good impression, what with so many of the guys thinking I couldn’t handle the job. I think I can tell you it does get a little rough up there sometimes and I knew all the sisters in the women’s movement were counting on me.

MS: Speaking of the women’s movement, what was it that inspired you to try for a position formerly considered a “man’s?”

GG: Well, I never considered myself a women’s libber, and was pretty content just being a housewife until I began-to see how many women were starting to work at “men’s” jobs such as police and priests and bankers, like at the Feminist Credit Union and as Television announcers, and at work my husband Larry even has a woman foreman, oh, I mean a foreperson! (laughs!

MS: Do you think that any of your qualities as a woman helped you prepare for success in your chosen field?

GG: Well, I was always sort of a tomboy when I was a girl, but I think mainly the guys on this job lack a certain sensitivity that as a woman I have. So many of them are so heavy handed that it’s embarrassing to bring a prisoner into court. You know, the defense attorneys start hollering “police brutality” if their client is too messed up. I’ve found that by using some of the techniques I saw used in consciousness raising sessions combined with our standard police interrogation methods, I can come up with the confession without having to worry about some liberal judge throwing it out on a “technicality.” By the way, did you know that some of the most liberal, pro-criminal judges in our courts are women?

MS: Well, let’s not get into politics. After all, we’re all sisters, aren’t we?

GG: Right on! As a matter of fact, I just got a bumper-sticker for my car that says, “Smile on a Sister.”

MS: In closing, do you have any words of advice or encouragement to other sisters who are trying to be the “first” in their field?

GG: The most important thing is determination and the desire to get what you want as a woman. I don’t want to sloganeer, but

“Sisterhood is Powerful’ and if we sisters stick together, we can become all that men are in this society.

MS: We’ve come a long way, baby! (They both laugh and give each other the clenched fist “power” symbol.)

—REPRINTED FROM MS. MAGAZINE BY THE EAT THE RICH GANG