Report from W. Germany
Politics of the “Nuclear State”

New Demonstrations During The Easter Holiday

The following was sent to us by a friend of the Fifth Estate living in West Germany and lays out the political implications of the “Nuclear State,” and gives a report on several mass anti-nuclear actions. 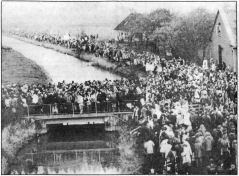 It is important to point out an aspect of the nuclear energy program which lies—independent from the deathly danger of nuclear energy—in the danger of the loss of personal freedom of each individual. Nuclear power plants do not only imply poisonous radiation, but also inevitably lead to the establishment of a totalitarian “nuclear state” and in the end to a complete control over the individual. Only in this way, argues the state, can the danger of sabotage be prevented. A recent example is the Traube case.

Traube, a scientist who worked in atomic research for the German government, had been dismissed because of his left-wing contacts. Even after his dismissal, all his phone calls were recorded and his private life spied upon with mini-transmitters (“bugs”) installed by the German Secret Service. The Traube case is surely only one instance which happened to be noticed—one out of many—where supervision and spying is practiced by the state.

Preparations for the complete control over the individual are already under way in our “democratic state”. In Wiesbaden/Hesse there is the Central Computer of the Federal Crime Police, which is already used to a great extent when police check the identity of people whom they control in the streets and in border checks. This system of control will be perfected when every individual receives his/her number. Plans for this central numerical registration are also well under way.

At present there are already cases where constitutional rights have been broken in connection with the atomic energy program, e.g. the right to demonstrate. Thus the demonstration in Brokdorf on February 19th was forbidden and the police in Grohnde tried to block the path of their demonstration. Opponents of nuclear energy are threatened by “Berufsverbot” (i.e. they are barred from civil service employment like teaching, working for the post office, railroads...).

The military fortification of the atomic power plants and the building sites and the massive concentration of police forces (in Grohnde alone there were 5000 cops) shows the ugly face of a police state. The police actions in Brokdorf and Grohnde resembled a “realistic set-up” of a civil war maneuver.

Apart from that, while discussing the “peaceful” use of nuclear energy, one must not forget its twin brother, the military use. To produce atomic weapons, it is necessary that a government possess at least one of the following three: enrichment of uranium, reprocessing of nuclear burning elements, or the production of plutonium. The Federal Republic of Germany will soon have all three at hand.

Finally, by exporting atomic technology into states which did not sign the treaty against the spread of nuclear weapons (like Brazil and South Africa), the atomic energy program can turn into a military threat to the entire world.

About 15,000 people demonstrated in Groleben (Lower Saxony on the border of East Germany), where there are plans to build a reprocessing plant and to deposit highly radioactive wastes in old saline mines, on March 12, 1977. In contrast to Brokdorf there was hardly any mention made of this demonstration in the bourgeois press and the leftist organizations did little to mobilize for it. In the face of what amounted to a boycott of the event, the fact that so many people came must be counted as a success for the opponents of nuclear energy.

The demonstration, which took place on the projected building site near Groleben, was well prepared and well organized by the local initiative groups.

There were even delegations from Denmark, Sweden and Norway. The Scandinavian population has an interest in preventing the project since its plans call for the depositing of nuclear waste from Scandinavia in Germany. The prevention of this central waste deposit is going to take a key position in the fight against the whole nuclear power program instituted by the German Federal Government.

If no deposit site for the poisonous radioactive nuclear waste is found, then all nuclear power plants already in operation will have to close down and those planned will not be able to open.

One week later, on March 19th, about 25,000 opponents of nuclear energy again met to demonstrate in Grohnde (Lower Saxony near Hanover).

The building site in Grohnde is heavily protected by the military (solid double fence, NATO wire—costs of the fortification 1.8 million German marks), so in two mighty blocks—one from the North and one from the South—the demonstrators marched to the site to meet. Already before the northern block started its march there was a minor conflict: police had stopped several busses of demonstrators some kilometers before they reached the meeting, but by blocking a railway line, the demonstrators forced an undisturbed arrival of all groups.

The second, more severe incident, happened on the way to the building site. Several hundred policemen and three heavy trucks blockaded the street. Well-equipped groups of demonstrators pulled the trucks away and broke through the police lines. The demonstrators enforced their right to demonstrate—a first success.

Having reached the building site, the aim was to “transform the building site into a meadow” (A slogan of the movement). About 5000 cops from all parts of Germany tried to prevent this with force. Water cannons shot ice cold water enriched with tear gas onto the demonstrators. From helicopters chemical mace was thrown, but kites drove the helicopters away to a respectable distance.

Under heavy bombardment with water and tear gas, several groups of demonstrators worked at the fence of the building site with welding torches, iron saws, wire cutters and long ropes in order to break through. They succeeded in breaking open a gap of about 20 meters into the fence which had been described as impenetrable by the firm which built it. A second success!

But now the police advanced with utter brutality.

The bourgeois press afterwards lamented about the demonstrators’ use of violence, but the violence was clearly initiated by the police. About 1000 cops advanced in front of the fence and tried to chase the demonstrators away. Mounted police galloped through the crowds, arousing panic and wounding many peaceful demonstrators. Whomever the police caught alone, he/she was mercilessly beaten. In this situation the environmental protectors had no choice but to withdraw from the building site into the town of Grohnde.

New Demonstrations During The Easter Holiday