Republicans, get out of town 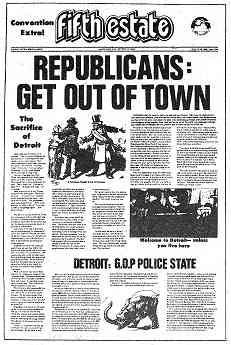 To the left is a reproduction of a one-page broadsheet published as a Convention Extra and distributed to the delegates who it managed to shock and enrage and to Detroit residents who took it a bit better. Reprinted below is the lead story to give a flavor of the paper.

We mean it; pack your bags and leave Detroit! Take your vile political party, your cadaverous candidate, your stinking love for the state, your vicious racism, your blatant sexism, your hatred for the poor, your insane war plans, your nauseating patriotism, your putrid Christianity, your antiquated sexual morality, your contempt for the rest of the world, your millionaire officials, your middle-class sensibilities and your pathetic lack of vision and get out of our city!

We mean it! Daily life is bad enough around here without your two-ring circus turning this city into a mini-police state decorated with balloons and pennants. Don’t be fooled by the pervasive media hype that would like to convince both you and us that your appearance is “good for Detroit.” Most of us know it is your fellow Republicans like Henry Ford II, Lee Iacocca, Max Fisher and the rest who have produced the current depression in Detroit (and in Detroit it is a depression and not a recession like back in your suburban enclaves). No one cares about your shrinking political gang and its attempt to wrest control of the state apparatus from the clowns currently occupying the White House. The last time your slimy party elected a President, only 13% of the U.S. population even bothered to vote for him and he turned out to be a crook!

Your very appearance—your fat, white faces, beady-eyed, dreaming of an America that never was and never will be—is an insult to all of us who have made your average delegate income of $47,000 a year possible! The city you think so ugly and violent is constructed just that way so as to allow you to enjoy your “American Way of Life” while we and the rest of the world exist on what’s left. Even walking down the street you are a provocation in a city which has been gutted of much of its human characteristics and replaced instead by that which you adore—architectural monstrosities, factories, machines, freeways, and offices.

Your desire to defend this grotesque world plucked clean of its human meaning, its sensuality and its joy with MX missiles, neutron bombs, new manned bombers and even more nuclear weapons, makes you our implacable enemy! We want you out of here and fast! Go to Miami Beach where most of you wanted the Convention to be held in the first place. It is a fitting place for the living dead.

Your stay in Detroit only serves to incite our rage at this society and at you—the cheerful robots who sing its praises. We are filled with desire for a free and full life which will mean you and everything you represent being swept from the Earth. You insult our dreams with every moment you remain! Leave!

See “Convention & Counter-Convention: Republicans” in Detroit in this issue.