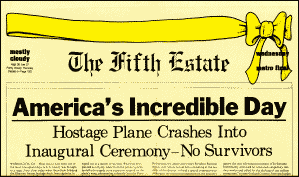 WASHINGTON, D.C.—What was to have been one of the most triumphant days in U.S. history was brought to a tragic, fiery close today when the jetliner bringing the fifty-two former hostages back from captivity in Iran crashed into the Presidential inauguration ceremonies here, killing all aboard and taking with it numerous leaders of the United States government, armed forces and industry; including President Ronald Reagan, Vice President George Bush, Defense Secretary Caspar Weinberger, Senators Strom Thurmond and Jesse Helms, evangelist Billy Graham, former President and Vice President Jimmy Carter and Walter Mondale, all nine members of the United States Supreme Court, General William Westmoreland, Henry Ford II, Frank Sinatra, Donnie and Marie Osmond and hundreds of other senators and congressmen, governors, mayors, Republican and Democratic Party officials, industrialists, bankers, religious leaders, military and police officials, and television and movie personalities.

In a bizarre, almost unimaginable set of circumstances, the leading members of U.S. society were wiped out in a matter of seconds. What had been planned as a fly-by salute from the jetliner quickly turned into tragedy as an explosion erupted on the plane’s wing, plummeting it directly into the Presidential reviewing stand. The aircraft then broke into two flaming segments, one cutting a huge swath through the crowds of spectators, the other sliding up the White House lawn and crashing into the Presidential mansion, reducing it to smoking rubble in literally a matter of minutes. In those few breathless moments, an era came to a close.

“I can’t believe it,” one reporter exclaimed, tears streaming down both cheeks, “This is worse than the Hindenburg crash!”

President Alexander Haig, the former Secretary of State and next in the line of succession to the office of President, was sworn in twenty minutes later and immediately declared a National State of Alert and martial law.

“Sinister forces are at work,” he was quoted as saying after the grim swearing-in ceremony at the Pentagon, “and I mean to take them on toe-to-toe.”

He immediately appointed former President Richard Nixon, with whom he had been consulting at the moment of the disaster, to head a special commission to investigate the mysterious explosion on the aircraft’s wing. A member of the Nixon Commission appeared before a hastily-convened press conference, waved a sheaf of documents recently captured by the CIA and declared “I have here in my hand absolute proof that Salvadoran and Cuban saboteurs, in the pay of the Soviet state, were involved in the crash of the DC10 carrying the former hostages back to the United States.” (Other memoranda which have recently come to light, according to government sources, reveal the presence of Iranian military advisors in El Salvador, Soviet freighters in Nicaragua, and Cuban troops near U.S. military installations at Guantanamo Bay in the Caribbean. See story on P. 94)

The President moved quickly to restore confidence in the shattered government’s ability to rule effectively and to head off any attempts by the enemy to capitalize on the temporary power vacuum. Among his first acts as Chief Executive was a declaration of war against the new left-wing government of El Salvador. Immediately afterward he reinstated compulsory military service and called for the drafting of one million young men “to save God and Country from the hordes of international communism, immorality and primitivism right here in our own back yard.”

Haig said that the nation, though “shaken by this enormous tragedy,” is far from demoralized and even more determined than before to honor its commitment to shield Central America from communist encroachment because America “keeps her word.” But he said he knew of “no plans being made at this time” to carry the bitter guerrilla war from El Salvador into Nicaragua. President Haig pinned responsibility for the fighting in Central America squarely on the communists, asserting that “it is others who make war, and we who seek peace.”

Asked if he would be willing to use nuclear weapons in the case of a stalemate, he replied, “Sometimes it is necessary to destroy a region in order to save it. I would rather be the last president than a dishonored one.”