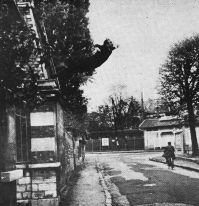 “Just say whatever comes to mind.” The voice, calm, quiet and paternal, rolled across the desk.

“Everything is bullshit,” A.J. said.

There was a quick, nervous giggle, then the voice found itself again.

“I’ll ask you to refrain from using that kind of language,” the voice said. “I’m a family man.”

“Nothing means anything,” A.J. said. “Life adds up to zilch.”

“You are young,” the voice pointed out.

“...and have no respect for your elders,” the voice went on.

“See, that’s something else,” A.J. said. “Like you’re supposed to respect people just because they’re old. That’s a hard one for me. It isn’t like we live in the jungle, so surviving means anything—it just means growing old. That doesn’t strike me as being too hard to do. Then when you’re old, you eat dog food. What kind of respect is that?”

“What you have to do,” the voice said, “is find a direction. You’ll stop thinking about these things once you have something else to worry about.”

“But the things will still exist.”

“And are being dealt with by better minds than yours.”

“That’s just it,” A.J. said. “I’ve got this terrible feeling that if I don’t do something, nobody will.”

“Common to your age group,” the voice soothed.

“Somebody told me that I’ve already had the wonderful part of my life, and I’m telling you, it wasn’t so hot.”

“You’ve been reasonably privileged,” the voice said, somewhat bored. “Your life could have been much worse than it’s been.”

“I’m prescribing a mild tranquilizer for you,” the voice said abruptly. “Come back and see me when you’re ready to help yourself.”

A.J. knew he was burning the last bridge, and hated to see it go.

“Listen, now,” he said, “please listen. What’s hanging me up in the worst kind of way...I just want someone to answer some questions for me, all right? What I want to know is what do you call a system where everything is a lie, the kind of lie that people even believe in when they can see with their own eyes it’s not true; their whole lives are in the hands of somebody else and that somebody is keeping secrets from them and they think he should keep secrets from them; a system where we’re all supposed to be stupid children, we never do get out of that classroom, we never have anything of our own if the hydro company decides to take it away and you can work your whole life then have the banks close on you and it’s all over, anyway; a system where everyone knows and says the people running the show are crooks, everyone says it, and in the next breath they defend the bastards to the death. What kind of system is that?”

“Son,” the voice said, shaking with passion, “you just get a grip on yourself right this minute. That system is democracy.”

It was the beginning of something.