Radio Libertaire Back on Air After Police Raid 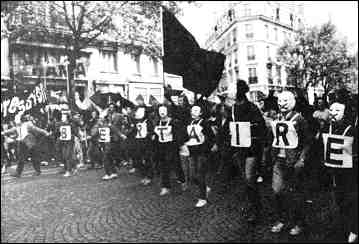 Some of the 5,000 who marched in Paris Sept. 3 to protest the police suppression of Radio Libertaire.
—photo F. Arcos

Shouts of joy greeted the sounds of Radio Libertaire’s return to the airwaves Sept. 3 after having been shut down by a police raid six days previously.

At 5:45 am on Sunday morning, Aug. 28, the Paris premises of the anarchist radio station, Radio Libertaire, were broken into by police, the equipment trashed, the broadcasters arrested and kicked. The forces of “law and order” were experienced at this work, having silenced fourteen other “free” radio stations the previous weekend.

R-L and several other stations had been denied an assigned frequency in May by the Socialist/Communist government (see Fifth Estate Summer 1983), but most, including the anarchist broadcasters had continued transmitting without official approval. The authorities charged that the “illegal,” broadcasts were creating cacophonie on the air waves. However, it is suspected it was crasser political reasons which motivated the Socialist government to move against its anarchist critics.

French Anarchist Federation comrades and supporters of Radio Libertaire understandably had feared and anticipated such an attack. A July issue of the anarchist weekly Le Monde Libertaire carried a warning that the “socialist/communist government” was likely to attempt to rid itself of the “voice without master” during the Summer holidays when many Parisians are vacationing.

Radio Libertaire did maintain a rudimentary alert system. One preliminary warning was given 15 minutes before the attack but by the time the cops’ attack was clearly imminent, the riot police had cordoned off the area and supporters could not get access to the building.

Agents and technicians of France’s Palace of Justice proceeded to demolish the front door, dump the transportable equipment into a van to be carried off, dismantle the transmitter, and sever the antenna cable.

An account in the Sept. 3 Le Monde Libertaire reports two minor consolations another free radio station was able to broadcast part of the sacking of the station because one of the R-L announcers was able to take the telephone off the hook; and the dismantling of one transmitter was delayed because it carried a sign warning “Danger! Transmitter Mined!”

On Sept. 3 a demonstration with 5,000 participants protested the government’s attacks. R-L supporters were joined by those of other banned stations.

The French Anarchist Federation and supporters of R-L are now trying to raise money to replace the confiscated and ruined equipment. Most recently a successful two-day festival was held which was widely attended. Donations for Radio Libertaire may be sent to 145 rue Amelot, 75011 Paris France. R-L also encourages protests to the Communications Ministry and French embassies.