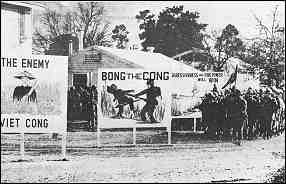 With the Vietnam analogy on everyone’s lips, first for El Salvador and Nicaragua, and now for Lebanon, the signs of similarities arise ever more frequently. One such indication is shown here in the accompanying two photos. The first is from the front page of the January 15, 1967 Fifth Estate showing draftees marching in Ft. Polk, LA, beneath a racist portrayal of orientals exhorting the soldiers to “Bong the Cong.” “The Enemy Viet Cong” turned out to be all Vietnamese, whether soldier, guerrilla, civilian, woman or child, with a resultant one million Vietnamese slaughtered by the U.S. war machine. The second photo is from Lebanon, taken during October prior to the bombing of the Marine headquarters and similar to the Vietnam era, the soldiers are implored to “Kill All the Rag Heads.” All Arabs are reduced to their traditional headgear and all are the enemy. It is the same racism, the same arrogance, the same unquestioning obedience to the state military apparatus which masks another’s humanity in order to turn them into mere objects for murder.

Troops on the frontlines, as in all wars, must see those facing them not as their enemy, but as their brothers and sisters. The real enemies are the politicians who direct the war and the army officers who command them. Troops! Fraternize with the other side! Refuse orders to kill! Make peace on the battlefield! Say no to death! Say no to the State. Be human.