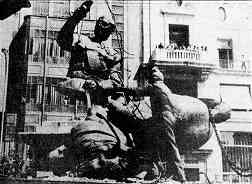 Last autumn fascists nearly rioted when twelve volunteers, hooded to protect their identities, removed the equestrian statue of Franco from the Plaza del Pais Valenciano in Valencia, Spain. While the National Police looked on, ultrarightists sang fascist hymns, threatened the workers and attempted to disrupt the operation. Finally the cops dispersed the demonstrators.
Later, fascists bombed a statue of the American revolutionary Simon Bolivar in reprisal. The dismantled statue, which had been slated for removal for four years before action was finally taken, has gone to a military museum. (Photo: El Pais)

Charta 79: The Sami People & Human Rights is an English edition of a collection of essays by and concerning the indigenous peoples of northern Scandinavia. The Sarni of Semiland, which is comprised of the northernmost sections of Sweden, Norway, Finland and the Soviet Union, refuse to be called “Lapps” or to call their lands “Lappland” as these are names imposed on them from the outside, names which are derogatory and insulting to them. The Sami have lived a semi-nomadic life in the Nordic lands since 8000 BC. They have lived by fishing, hunting, agriculture and reindeer husbandry.

In the 1800s with the interest of the nation states in the rich resources of Samiland, the Sami became a threatened people and were forced into the most harsh and undesirable regions of Scandinavia. As a result of the undaunted encroachment of Western Civilization, they have been confronted with such cold foreign concepts as private ownership of property, taxation, administration, employment, and politics. They have been forced to learn the languages of the nation states and to struggle with written laws.

The articles in this collection deal with several aspects of the Sami struggle for survival. An essay on the Sami women shows how their formerly equal and strong position has been undermined and made superfluous by the invasion of western modes of behavior such as competitive leadership, individualism and male domination.

An essay on indigenous Sami art discusses the absurdity of the isolated and refined notion of “art” and “artists” in Sami society where singing, making “handicrafts,” telling stories and carving sculptures have always been integrated into a way of life which could not distinguish such activities from the herding of reindeer, for example, or the preparation of food. At the same time, this essay shows that the Sami are now distinguishing these activities, as the author tragically, but with an ambivalent sense of practicality, speaks of using such artistic skills in order to survive. He discusses “artistic work” and speaks of using art “as a weapon” in a battle for indigenous people’s rights.

Other articles discuss the legal battles of the Sami to prohibit the Norwegian Watercourse and Energy Department from damming up the Alta-Kautokeino watercourses, building a power plant and a power station in the region, and of course, improving public access to the area by building roads. Such actions would flood reindeer pastureland, damage fishing resources, pollute the environment and totally upset the Sami way of life. The Sami lost this struggle and now similar government projects are being planned.

In these essays it is apparent, but not dealt with in any critical way, that the Sami culture has already been profoundly undermined by the very process of having to organize themselves according to the terms of state societies in order to protect themselves. In a classic catch-22 situation, their very thoughts, desires, and their ways of looking at life have been invaded by the insatiable needs of the modern world.

To obtain this publication and other information on the Sami, contact their English support group: London Green-peace, 6 Endsleigh St., London, W.C.1., England. Charta 79 can be contacted directly at: Charta 79, Miljoloftet, Grensen 8, Oslo 1, Norway. More on the incursion of civilization into Sami culture is available in the July 1981 issue of the Fifth Estate.

The new issue of Instead of a Magazine is out. Several articles included here deal with Anarchism and the pornography question. For copies, write: The Lysander Spooner Society, P.O. Box 433, Willimantic, CT 06226.

Reality Now is a new publication from Ontario which was started in order to give information to fellow libertarians and to discuss anti-statist ideas. They welcome articles, comments and criticism, and they hope to print every 2–3 months. Write: Reality Now, Box 965 Station B, Ottawa, Ontario K1P 5R1.

B.A.N.G. Notes is the newsletter of the Brooklyn Anti-Nuclear Group which seems to have a positive critical slant on the nuclear issue. The winter Notes include criticism of the Freeze, news about the disarmament movement in Eastern Europe, and updates on the legal battles of Native American political activists Dennis Banks and Leonard Peltier. One article that we found particularly interesting concerns among other things the futility of rallying according to the prefab concept of nonviolence of peace movement monitors.

“Turning back a militarist America has to mean, among other things, some very hard hitting tactics,” writes Bob McGlynn in the lead article. “Feeble marches and speakers at rallies won’t do it...A lot of activists are in the mood for ‘getting something done.’ When the U.N. rally marched to the Times Square Military Recruiting Booth the crowd started to spontaneously surround the center. It was ours for the taking. We could have easily disrupted its operations and taken the whole scene over. We could have made a morally legitimate forceful statement against a shameful military—bravely (hal) goosestepping onto a tiny island. But no. As always the movement’s organizers had a different idea and typically in their pretentious, paternalistic fashion explained over the bullhorns that we should stop and go to the rally toward the other end of Times Square. Another stupid rally! The marshalls and the ‘organizers’ that night won forever the label of ‘Peace Pigs.’” He suggests the British Columbia general strike and the movement in Poland as examples of possible avenues of action and calls for more discussion.

The BANG folks are suffering from overwork and lack of money. They’re looking for new ideas, writers, and contributors. Contact them at B.A.N.G., GPO Box 2666, Brooklyn, NY 11202.

Between the Lines, a bimonthly newspaper from the Ecology Action Centre, is available from the Centre c/o Old Provincial Archives, Dalhousie University, Halifax N.S. B3H 3J5.

SCREAM! An Individualist Anti-War Rag, has published a special January 1984 issue. Articles include an update on the status of indicted resisters and much more information on draft resistance and the war drive of the state. Subs are $10 a year for six issues. Write c/o The Voluntaryist, P.O. Box 5836, Baltimore MD 21208.