The space which the Fifth Estate shares with three other groups has been the scene of a number of events recently, mostly rock performances, but also a smattering of theatre and comedy. They have been generally well-received with an exceptionally gratifying turnout for our benefit held March 2. We raised $261 to help defray the expenses of maintaining the space shared by the Layabouts band, the Freezer Theatre Players and the Duck Club Players as well as the paper.

Entertainment was provided by the irrepressible Dirty Dog the Clown and John Sase from the Freezer, with rock and roll provided by the Layabouts and Private Angst. We have a free literature table here filled with FE back issues and other literature we have on hand, and much of it disappeared that night. We encourage readers to send us any quantity of leaflets, pamphlets, newspapers, etc., that they’d like to see circulated, and we’ll put it out.

Thank-you Department: 1) To all those who renewed their subscription, and without having to be sent a second reminder, 2) to those who have added to our financial solvency by including an extra bit with their sub renewals and book orders. Besides allowing us to not always have to be worrying about where the money for our next print bill is coming from, it also permits us to expand the stock of our bookstore and to continue sending reduced-rate subscriptions to prisoners and soldiers; 3) to our sustainers, who as usual remain the backbone of our support; and 4) to Roger Robinson of Unity Press who provided the typesetting paper for this issue.

Thank-you Department Part 2: Extra special thanks to comrades in Miami who made extremely generous contributions to keep us afloat. $150 was raised at the monthly anarchist picnic, and another $150 was donated afterwards individually from FE supporters and friends. One of our staff members had the pleasure of attending the Miami picnic in January (and the good fortune in timing, since in Detroit around that time temperatures were plummeting to as low as 20 below zero), and found anarchists in their 70’s, 80’s and 90’s to be among the most spirited and hopeful members of the radical libertarian community to be found anywhere. They also know better than most how to have a good time—serving up delicious food and laughing and singing away the entire afternoon. $250 was also raised for the Vancouver Five, and other funds were raised for libertarian publications elsewhere. Greetings and thanks to all our friends in Miami.

Whether you like it or not, truckloads of nuclear waste will soon be legally careening down Detroit expressways. Despite local opposition, the federal government has approved several waste shipment routes through heavily populated areas including metropolitan Detroit. Supreme Court action in February concluded that a federal environment impact study was not necessary because the nuclear shipments, unlike the construction of a highway, would not significantly affect the environment. The appeals court stated that, “It is only the risk of accident that might render the proposed action environmentally significant.” Of course, we all know how few accidents there are on Detroit expressways, so rest easy. 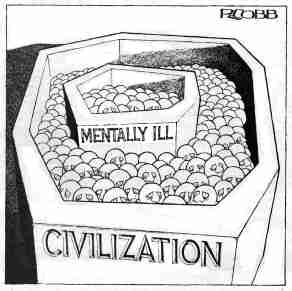 The powerful and insightful cartoons of Ron Cobb (see bottom of this page) appeared in the Fifth Estate from 1967 until 1974 through the auspices of the now-defunct Underground Press Syndicate (UPS). His work appeared originally in the-also defunct Los Angeles Free Press, the first “underground” newspaper of the 1960s. Our files are filled with seven years of Cobb cartoons which are no less relevant today than they were when we first reprinted them; look for more in upcoming issues. The cartoon printed here first appeared in 1974.

It has been said before that while figures never lie, liars sure can figure; so we don’t pay excessive attention to statistical studies. We told the feds to shove their census forms when they came around in 1980 (See “Take This Census and Shove It,” FE #301, Feb. 26, 1980, p. 5), so they missed many of us. On the other hand, one FE staffer’s next-door neighbor, a single man, claimed to have a wife and ten kids, in the neighbor’s words, “to bring more federal funds into the city.” So who knows? Yet despite inaccuracies, various statistics on the “misery quotient” do seem to portray the same Detroit that we see falling down around us.

For example: according to Census statistics, while Detroit measured first among the nation’s thirty largest cities in unemployment, it was last in private home values and third from the bottom in economic growth. People were also found to be fleeing Detroit in droves. Between 1970 and 1980 the population of the city dropped over twenty per cent.

As far as hunger goes, the picture is even gloomier. According to an article by Tom Ferguson in the February 19th Detroit Free Press, as automakers enjoyed record profits during 1983, the number of soup kitchens in the city quadrupled. Food lines and soup kitchens have even started to appear in the suburbs; during the same period their number doubled throughout the metropolitan area. During 1983 as many as 50,000 Detroiters lined up each month to receive government surplus cheese. Even the relatively affluent Oakland County saw its first shelter for the homeless open.

An average of 412,000 (34 per cent of the city’s population) were on public assistance in 1983. In January 1984 more than 40 per cent of Detroit households were receiving food stamps—up 37 per cent from December 1982, despite tougher eligibility requirements. In the tri-county area, more than 600,000 people—some sixteen per cent of the population—are living below the poverty level ($9,862 for a family of four last year).

Meanwhile, something is rotten, and it isn’t in Denmark. According to Detroit Auditor General Marie Farrel-Donaldson, some 194 tons of federally-provided foodstuffs spoiled in city-managed warehouses, and had to be destroyed, since 1982. Several tons of rice and flour had to be buried in a landfill after going bad in a warehouse on the city’s east side. Altogether, some 80+ tons of food from the warehouse had to be destroyed; another 74 tons or so remain totally unaccounted for.

The city charged that much of the food was already bad when received. The ruined food would represent about thirteen per cent of the food handled by the city government. According to the U.S. Agriculture Department, more federal surplus food has spoiled in Detroit than in any other city since the government’s emergency food programs were implemented in 1981. There are certainly politics mixed up with the rotting turkeys here, but none of the charges strike us as outside the realm of the possible.

Besides unemployment and food spoilage, Detroit came in first in another category: the highest per capita murder rate among the fifty largest cities in the U.S. In 1983 there were 581 murders in Detroit, 68 more than in 1982, a thirteen per cent increase. The old epithet, “Murder City”—earned in 1975–76 when this city led the nation in murders—has come back to haunt us.

Weather has been suggested as a possible factor. Also, police officials note that it isn’t quite so random as it may appear. “You are talking about family folks that killed each other, not street folks,” says Police Chief William Hart. Proving the adage that the family that slays together stays together, is the fact that 76 per cent of victims and killers knew one another. Eighteen per cent of the murders were committed by relatives of the victims. Nevertheless, over twenty per cent were between strangers, and the papers abound in accounts of unsolved slayings and reports of people killed in crossfire or because of mistaken identity.

Police spokespeople pointed to two trends: first, that murders are becoming more vicious, and secondly, that people are less inclined than ever to cooperate with the cops. We aren’t sure how many people were killed or wounded by cops last year. But then again, those murders probably wouldn’t be listed as such. Just the boys in blue getting the job done.

The 13th Precinct, where the FE offices are located, led the city in homicides-73 of them in all, a fifteen per cent increase over the previous year. Don’t worry—none of us were killed the last time we looked. One final statistic may help to give a sense of the meaning of all this misery and bloodletting: 81 per cent of the victims, and 85 per cent of the accused, were black. The crushing poverty and despair in the ghetto has its consequences. People are literally being driven mad by capital’s war against people of color and the poor.

For most of us, the murder factor has become a brutal dice game in which any one of us could be snuffed out on a single unfortunate throw. But among those families where the despair has reached delirium and the statistics take on their lurid reality, it is becoming a collective suicide.

No, you didn’t miss an issue. Both of the last two issues were marked No. 314 (the total number of issues printed since the paper’s beginning). The Winter 1984 issue should have been No. 315, a matter, no doubt, which will only be of interest to archivists and librarians.

The center four pages of this issue are the second edition of the Daily Barbarian (the first issue appeared in 1979) and is a product of the Urbane Gorilla, Box 02455 Detroit 48202. Besides its inclusion in the FE, a separate press run of an additional 3,000 will be distributed free in the Detroit area. This issue of the FE, when combined with the Barbarian, makes for the largest newspaper we’ve published since 1969; and if you subtract the copy inches wasted on advertising in the older edition, this is the largest issue ever (16 pages of our large-size format translates into a 32-page tabloid). We are still talking about returning to a smaller page format, but no decision has been made yet.