Draft To Make A Comeback?
The government is ready

[two_third padding=“0 20px 0 0”]The reinstitution of the military draft is practically a foregone conclusion according to many observers. All that is needed is the official go-ahead from Congress to set the wheels in motion.

The October 1982 government exercise dubbed “Operation Proud Saber” proved that all is in a state of readiness. Draft boards have been trained and are ready to open; rules and regulations are up to date; and military reservists are ready to serve as temporary staff at induction centers across the country. The Selective Service System (SS) awaits only Congressional approval to begin calling up young men.

These are plans for all out mobilization which requires 100,000 men in basic training within 30 days of the announcement of a state of emergency. Since the SS anticipates that a certain number of notified men will not respond, will be deferred, or will fail their physicals, orders to report will be sent to at least half a million men in the first month. Those men targeted for induction (and they will begin with 20-year-olds) will be given ten days to appear for their physicals.

A recent article by draft resister Gilam Kerley in the March 1985 Progressive stresses the importance of being aware of one’s options. According to Kerley, “The very speed of the planned mobilization threatens to bring confusion as well as arbitrary and discriminatory inductions. For instance, an individual who neglects to file the correct SS form within ten days of being called up will lose all rights to reclassification.” Such inflexibility and bureaucratization obviously work toward a poverty draft and take advantage of those who have no access to legal counseling and are unaware of their options (disproportionately the poor and minorities).

Kathy Gilberd, who heads the National Lawyers’ Guild’s Military Task Force, says, “People who are not armed with good information and who don’t know enough about how the system works to fight it, will be in basic training before they know what hit them.” Gilberd fears the possibility of Congressional approval of the draft not because she thinks that Congress will acknowledge a threat to the nation’s security, but because it will not perceive a strong enough opposition to the draft.

However, there is opposition and it may be stronger than Congress realizes. Since 1979 there have been 500,000 non-registrants and of that number only 18 have been indicted over the past five years. Only five of those 18 have been jailed, and the rest either have cases pending, have performed some required community service, or have had their cases dismissed. Also, according to recent Selective Service reports, non-compliance is growing. 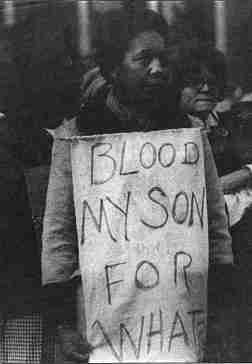 Faced with this, the SS has continued to make things difficult for non-registrants. The government has now issued draft cards (although they don’t call them that) which young men may use as proof of registration when applying for financial aid at universities. This facilitates the enforcement of the Solomon amendment which prohibits non-registrants from receiving such aid.

Although the SS has not permitted anyone to apply for Conscientious Objector (CO) status (claiming that the draft has not yet been officially reinstated), they have now come up with a CO form for application. The form does not allow for the expression of anti-war beliefs based on religious or moral considerations.

Joseph Tuchinsky of the National Inter-Religious Board of COs, says its the worst CO form he’s ever seen. The information on the forms will supposedly be available to other government agencies as well, including the FBI and the Justice Department.

There are other indications that the draft may soon re-appear. The Defense Department announced recently that enlistment has fallen off slightly after four years of “successful” recruiting. According to a recent article in the New York Times, “Those signs have made advocates of the volunteer armed services nervous about their prospects and have begun to generate calls for a return to the draft that ended in 1973.” The Times article attributed the decline in recruits to a drop in unemployment, but perhaps more young people are wise to the tactics of the military and are not opting to sell their bodies to the war machine.

As we reflect on the horrors of the Vietnam war, as we open our eyes to the government’s criminal acts in Nicaragua and El Salvador, we should sense the crucial significance of the anti-militarist movement and encourage opposition in ourselves and in our youth, who will otherwise become victims of yet another ludicrous exercise in death and folly.

Paul Jacob, the draft resister who went underground in July 1981 to escape prosecution for his vocal anti-registration position, was arrested in his hometown of North Little Rock, Arkansas, on December 6. Federal agents arrested him at the apartment he shared with his wife and baby daughter, and later released him on $75,000 property bond. His case is to begin July 15 after pre-trial motions for dismissal are heard by the presiding judge.

Although a federal fugitive, Jacob made numerous public denunciations of the draft during his 3-1/2 years underground. He told the Young Libertarian in 1982, “The draft is slavery, regardless of whether it’s for war or building bridges or chopping trees; the government has no right to force young men into slave-labor.” He is also critical of the judicial system which has indicted resisters and advises young men to go underground rather than submit to the insulting bureaucratic process of the law. “If the choice is between jail and the draft, then 18-year-olds have no where to go, but...there’s a better alternative. That is simply to move away from home and leave no forwarding address,” he said.

Jacob’s arrest does not negate his advice. As a vocal resister encouraging a viable illegal tactic for avoiding prosecution, he was a prime target. Also, he had obviously become weary of his fugitive existence and had returned to his hometown and family where FBI agents were probably patiently waiting.

Paul’s legal expenses are expected to exceed $20,000 and his possible imprisonment will undoubtedly cause financial difficulty for his family. Contributions may be sent to: The Paul Jacob Defense Fund, P.O. Box 15724, Little Rock, AK 72231.

There has been other anti-draft resistance news of importance recently:

In a 7–2 decision, the U.S. Supreme Court voted to uphold the government practice of prosecuting only young men who have openly (i.e. “publicly” and “vocally”) resisted registration. The decision means that David Wayte, who had fought prosecution on the grounds that selective prosecution violates the right to free speech, must again stand trial for noncompliance. Wayte, who had kept government officials posted of his whereabouts and his personal position on the draft by means of letter-writing, was termed “too vocal.”

In a majority opinion on the case, Justice Lewis Powell stated that, “In principle, Wayte’s view would allow any criminal to obtain immunity from prosecution simply by reporting himself and claiming he did so in order to ‘protest’ the law.” The Justice Department is now expected to continue several cases which were delayed pending the Supreme Court decision on the Wayte case.

Bill Smith, one of Wayte’s attorneys, feels that non-registrants who have not made their non-compliance public are the least likely to be prosecuted. “As long as they don’t make any speeches or let anyone know publicly that they didn’t register, they’re OK,” he said. A Justice Department official recently stated that “With the present universe of hundreds of thousands of non-registrants, the chance that a quiet non-registrant will be prosecuted is about the same as the chances that he will be struck by lightning.”

Much of the information in this article was taken from Resistance News, Box 42488, San Francisco, CA 94142 and the Young Libertarian, Box 64, Trenton, MI 48183. For information on draft resistance contact: Committee Against Registration and the Draft, 201 Massachusetts Ave. NE, Suite 111, Washington DC 20006. 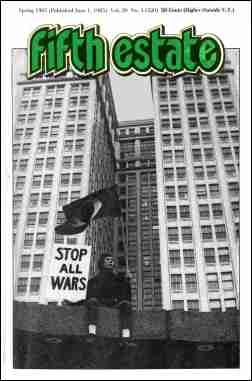 Note on our cover

The flag held by the person in the photo is the symbol of the draft resistance movement during the Vietnam war. Massive opposition to the draft included induction refusal, refusal to register, draft card burning and violence against draft boards. The government abolished the draft in 1973.