Guatemala: A Country In Chaos

Since 1954, when a U.S.-backed coup toppled the democratically elected reformist government of Jacobo Árbenz, there has been a succession of military regimes aided by the U.S. The Guatemalan people, 60% of whom are Mayan Indians, have fought through both peaceful and violent means for social change; the Guatemalan state’s response has been the brutal suppression of any and all movements of opposition or reform. 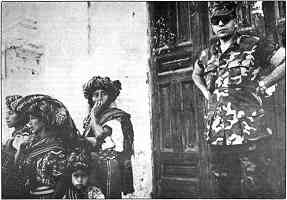 In the city this repression has taken the form of government-organized death-squads; in the countryside there have been large-scale army massacres, primarily of Mayan Indians. Some 90,000 people have been murdered since the 1954 coup, 30,000 of them in the last five years.

The lack of human rights extends beyond government torture to sophisticated methods of counter-insurgency, such as the Civil Patrols (through which the army has forced nearly a million, mostly Indian, men and boys into local “defense” patrols), the burning of crops and villages and forced relocation of peasants into “strategic hamlets” (Vietnam-style military-dominated camps), or the “food-for-work” programs.

As a result of the government’s war against guerrillas and radicalized Indian communities in the northwest highlands, there are a million internal refugees inside Guatemala, in the mountains, the city slums and on the plantations along the western coast. Another quarter of a million have fled the country, many to neighboring Mexico, where the Guatemalan military has massacred refugees in camps along the border.

During late August and early September, massive spontaneous demonstrations sparked by an increase in urban bus fares took place in Guatemala City. With one in every two workers either unemployed or under-employed, and with record-high inflation levels, Guatemalans are faced with the worst depression since the 1930s.

For a people traumatized by political repression and death squads, the fare increase was clearly the tip of an iceberg.

On September 4, Guatemalan Chief of State General Mejia Victores was forced to revoke the fare increase because security forces were unable to contain the protests. Other concessions were made in a response to union demands for a freeze on food prices, but these superficial moves did not quell the revolts, and people began to demand the release of some 2,000 people arrested during the protests. The demonstrations lasted through September 6, and left at least 12 dead and more than a hundred wounded at the hands of the police.

Because of international pressure, general elections have been scheduled for November 3. The Reagan administration quickly cited these elections as proof that their client state is moving toward democracy. However, in past elections, even moderate candidates were assassinated by death squads, and only center to right parties dared to participate. Recent kidnappings and murders of human rights activists and family members of the desaparecidos (people “disappeared” by death squads and the police) demonstrate that the elections are nothing but a fig leaf.

Reagan has already proposed increasing aid to Guatemala to $77 million next year and has asked for $10 million in military aid. (Though military aid was suspended in 1977 due to human rights violations, U.S. client states, particularly Israel, provided military and intelligence aid to the dictatorship in the interim.) The Reagan administration ended the seven-year embargo this year by giving Guatemala $300,000 for military training.