Plans for Haymarket Centennial
Anarchy to Reign Again in Chicago 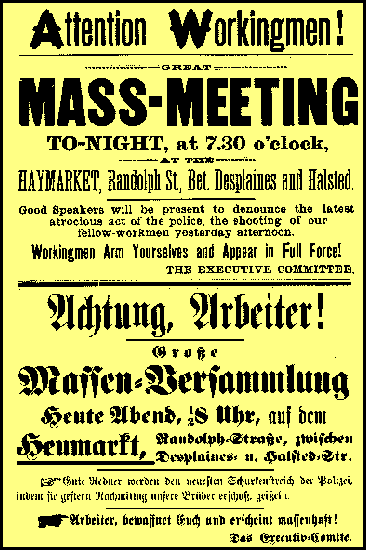 A Thanksgiving weekend planning conference in Chicago, which was attended by some 50 anti-authoritarians and anarchists from the US and Canada, announced a centennial celebration to take place during May Day week, to commemorate the 1886 Haymarket Affair.

Haymarket was an example of the state and capital’s brutal suppression of the workers’ movement in Chicago culminating in the state murder of five anarchists (four by hanging).

Those attending the planning conference saw the May 1st through May 4th events as a time to celebrate and explore historical anarchist roots as well as the present and future of anarchy. Though many details have still to be decided regarding space, finances and interaction with others planning similar events, many decisions were reached and participation is encouraged.

The Chicago Anarchists United (CAU) agreed to take responsibility for coordinating participation in three demonstrations, including possibly speaking at a rally during the traditional May Day march, or holding a counter-rally if they are turned down as speakers. On May 2, an anti-Capitalism demonstration is planned in Chicago’s business district which is the home of many infamous corporations, government offices and foreign consulates. CAU will devise a route and the rest will be up to the participants.

Anarchists are not the only ones with plans for Haymarket observances, however. A group called the Haymarket Centennial Committee (HCC) (which is composed of social democrats, socialists, liberals, stalinists, and labor hacks) is planning a rally and monument dedication at Haymarket Square on May 4th. They are planning to have two congressmen, representatives from the AFL-CIO, and possibly Jesse Jackson, Studs Turkel, and the Mayor as speakers. The attempt by the HCC to rewrite history to conform to their philosophies is evidenced by their presentation of the Haymarket anarchists as reformers who were fighting for the 8-hour day rather than as the militant revolutionaries they were. Suggested responses to the HCC’s demo ranged from the erection of a gallows, to the recital of speeches from the anarchists’ trials. Also suggested for May 4th is a gathering at Waldheim Cemetery where the anarchists are buried.

The possibility of a film series, a concert, dramatic readings and drama, as well as a banquet for the night of May 3rd, were also discussed. Suggestions and organizers are needed to continue these plans.

There was unanimous agreement at the conference that all planning and organization will be restricted specifically to anarchists, while attendance will be left open to all. This resolution was an attempt to deal with the concern that authoritarian organizations (such as marxist-leninists, maoists, et al) not be allowed to take control of the events, based on many past negative experiences with these organizations and their “front” groups. Discussion specifically revolved around the Shimo Underground which has given its unqualified support and endorsement to both the RCP and their No Business As Usual front group. After reading a letter, signed by the Shimo Underground, printed in the October 1985 edition of the Revolutionary Worker, (the RCP newspaper), which gave their lavish and uncritical support for the stalinist group, a motion was adopted by the conference group which denied Shimo decision-making privileges, since they were obviously not anarchists, but allowed them to stay as observers. Shimo then walked out. (Bye-bye!)

CAU encourages all interested groups and individuals to participate in the planning of the May event. They will send out a monthly bulletin which will pass along suggestions and ideas to others, so those planning events can contact one another for help. Money is needed for everything from workshop space to mailings and the CAU is encouraging benefits, fund-raisers, art and literature sales, etc., to help raise money for the May gathering. Make any checks out to Haymarket ’86 and send donations to: Haymarket ’86 Bulletin, Box 102, 1200 W. Fullerton, Chicago, Illinois 60614.