Where are the Bulgarians now that we need them department: Get ready Detroit! As the archbishop and the mayor slap each other on the back for bringing the pope himself into town in September, local entrepreneurs are geared up to produce all the exciting papal potpourri to be hawked in the wake of the holy parade as it cruises up Woodward Avenue and out to Pontiac’s Silverdome to pray that the roof doesn’t cave in. What will it be—tee shirts, buttons, pinwheel beanies, and, undoubtedly the classic style commemorative Popa Cola for a taste that refreshes. Rumor has it that the Pope plans to personally bless the site of the City’s world’s [as in print original] largest trash-to-dioxin municipal incinerator. Local fundamentalist christians are understandably horrified to see the antichrist and Whore of Babylon himself in these Yewnited States, and plan mass baptisms of born-again christians down at the Rouge River. Rumor also has it that there will be a huge pagan festival (more to our liking, though we’d enjoy seeing the born-agains fending off the bloated rats down at the Rouge as they go down for the third time) to coincide with the papal visit, to call up all the old Indian spirits of these lands to drive the blackrobes and their ilk away. Of course millions will be spent (and made) and security is going to be hard-core. Since, as Stalin once cynically but aptly pointed out, the pope has no military divisions, he’ll be relying on Detroit’s finest and lots of plainclothes pigs from every imaginable agency (and some we’ve never heard of, probably) to make sure the holy daddy-o doesn’t trip over his gown. Detroiters! Here’s your chance—a once-in-history opportunity: MOON THE POPE:

When you think of tumble weeds you think of the far west, desert towns, ghost towns, but tumbleweeds have been blowing down the streets of Detroit for many years now. There are more and more abandoned buildings and empty overgrown lots. The ring-neck pheasant population has been growing here, and they can be seen shooting out of the open fields and flying across the streets near the freeways in the center city. We recently watched a beautiful male pheasant outside our window at the FE, tranquilly sunning himself in the yard behind an abandoned house. Some say there are more skunks and opossums in the city, too. We’re waiting for the coyotes to make their way in; their numbers have suddenly increased in the northern part of the state.

Unfortunately, technology encroaches faster than the coyotes. Back in the summer 1983 FE, we wrote of plans to turn Detroit into a new mecca of scientific and high tech research, a “High Tech Crescent” to be built in the Cass Corridor between Wayne State University and downtown, linking the university and big business even more tightly in research and development.

In 1982 the Michigan Center for High Technology was established in the Corridor on Temple and Second to encourage the transfer of technology from universities to industry and to provide research, lab and office facilities to small high tech businesses. Described as an “incubation program” for technology, the center will be the opposite for the people in the Corridor. High tech development will bring renovation and gentrification, along with destruction of housing, rent increases and evictions and the subsequent attacks on the poor and elderly.

The future tenants of this crescent are not people, by the way, but such categories as robotics. rehabilitation (half-way houses for robots?), biotechnology, toxicology, brain injury trauma, laser research and telecommunications.

Of course, wherever there’s high tech research there is war research. With Wayne State, many of the private corporations heavily involved in expanding engineering and related programs (while WSU washes the humanities down the tubes) and expanding the engineering building itself are major war contractors like GM and Unisys (a combo of Burroughs and General Dynamics). Street widening and “improvement” has gone hand in hand with the work on the engineering building, with Third and Second Avenues straightened in good Cartesian fashion (a development which flattened a little garden and wiped out an idiosyncratic turn that kept traffic speeds down and provided refuge for wandering tumbleweeds caught in the corners). We have heard that in order to receive war research funding, research facilities must have adequate access for large trucks, which along with plans for the high tech boulevard down Third, would explain the elaborate road work (though simple graft would also be a factor). The only silver lining in this cloud so far is that the huge cost overruns and shoddy work on the engineering building are now cutting into the facility’s money. A pity.

Detroit has now returned to its star status of the mid-‘70s as the U.S. city with the highest murder rate per capita—approximately two people a day. Much has been made of all this by those who are most to blame, the politicians and business interests who administer the city.

There have been public prayer meetings against violence and even an official “No Crime Day” declared by the mayor. Several people were shot that day including a Detroit cop who was killed; guess some people didn’t see the billboards. A lot of the media focus has been on violence among and against young people. More than 45 people under 18 have been shot this year in the city, and the violence statewide among youth has reached epidemic proportions. Politicians are now planning youth detention camps in northern Michigan. The camps and the plans for state prison construction on Detroit’s east side bring to mind industrialist Henry Clay Frick’s comment that he could always pay half the working class to kill the other—except that now they are going to be paying half the ex-working class to guard the rest of the ex-workers.

And in fact the violence is only a result of conscious capitalist decisions to relegate the industrial workers, and particularly black workers, to the trash heap, as the city is increasingly looted by banks and corporations, and the poor are left with nothing but hopelessness, rage, and cheap weapons. In a violent empire built on slavery and frontier massacre, it was only inevitable that as the cycle of industrial expansion ground down, the frontier would implode.

The blossoming culture of violence is a compelling indicator of social breakdown, but so far it only reproduces Frick’s image of the poor killing the poor which leaves capital intact. When people start to realize what the roots of the social crisis are, real radical change will occur.

Moving out of the Winter doldrums opponents of Detroit’s proposed giant trash incinerator scheduled an ambitious Festival of Life in mid-March to protest the facility and to affirm alternatives to techno/consumer-society.

A wide-range of activities including two nights of music, two of poetry, a demonstration, art exhibit and a conference reflected the increased level of involvement of people in opposition to Mayor Coleman Young’s $450 million “People Killer” or “The Beast,” as it has been alternately dubbed.

Protest against the deadly potential of the plant has been international, with residents of Detroit’s Canadian sister city, Windsor also fighting the construction through events like an exciting art exhibit at the Common Ground gallery featuring incinerator specific creations and an official (hence, weak and inadequate) city petition. 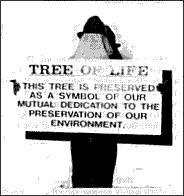 Tree of Life: In the Spring of 1986 protesters planted a real tree directly on the future site of the world’s largest trash incinerator. The city reacted cynically with this dramatic sign made from dead trees. The text reads, “This tree is preserved as a symbol of our mutual dedication to the preservation of our environment.” The Tree of Life sign was subsequently seized by “environmental terrorists” (in the spirit of “mutual dedication”). Our tree was to be transplanted to a safer location. It eventually was—it went with all the other vegetation under the bulldozer’s blade. Photo: Juan