When Cienfuegos Press ceased publishing books several years ago, it left unfilled the anarchist movement’s need for regularly appearing quality titles. Their energetic efforts produced numerous volumes which ranged from the arcane and theoretical (Proudhonist Materialism & Revolutionary Doctrine) to the practical (Towards a Citizens’ Militia) with stops along the way for anthropology, criminology, history, several autobiographies, biographies, and assorted essays on anarchist themes. We thought most of the volumes unavailable, but fortunately they can be obtained through an American affiliate, Cienfuegos Distribution, c/o Soil of Liberty, Box 7056, Powderhorn Sta., Minneapolis, MN 55407. They have a catalog of their titles available, many of which the Fifth Estate Bookstore will soon be ordering.

More book service/catalog news which is both good and bad. Bad is that Alan Fairlamb, stalwart of New York City’s (A) Distribution (USA), will be returning home to England after four years of incredibly hard (sometimes solitary) effort during which thousands of copies of anti-authoritarian literature were sold throughout the country. The good news is that Alan has informed us that he is leaving the project in the hands of two capable associates who plan to continue and expand the service.

(A) Distribution will now sell to individuals as well as booksellers and a catalog of their titles is currently available for a $.39 stamp. They list many fine volumes, some of which we plan to order. A rousing good-bye to Alan for a job well done and for the good friendship he always extended to us. (A) Distribution’s new address is 396 Seventh St., No. 2, Jersey City NJ 07302.

On Guard, a “GI/Veterans rights” newspaper, now in its third issue and with a circulation of 15,000, doesn’t call for mass mutinies against imperialist war or for turning the guns around, but its simple call for “extending civil and human rights to the military” is fundamentally subversive. Organized violence is at the core of all nation states once the veneer of laws and the like have been stripped away. Keeping this hierarchy of death intact depends on the mindless submission of the average soldier to military authority.

Hence, the military of all nations react with extreme ferocity to even the slightest suggestion that the individual should have the right to question a policy which might result in his death or his taking the life of others, for some stupid government policy. So, even the basic civil liberties demands put forth by On Guard, its defense of gay soldiers and GIs being victimized by drug testing are seen as threatening by the military brass.

One gets the feeling that when GI revolts begin again, as they did during the Vietnam era, to challenge imperial wars, On Guard and its parent organization, Citizen Soldier will be there supporting them.

The following record reviews describe rare examples of fairly useful plastic. A couple of disks have remained around the office for months without being flung across the room—like, they relate somehow to the rest of the FE madness. For the most complete (and quickest) coverage of alternative music we recommend Sound Choice (P.O. Box 1251, Ojai, CA 93023) or for a strictly, ah, harder edge, Maximum Rocknroll (P.O. Box 288, Berkeley, CA 94701).

Forethought: ‘Dejenlos Cruzar Las Fronteras.’ The two songs on side one only made me miss the Minutemen even more—till I flipped it and heard, ‘We’re just spreading words/We’re not spreading lies’ with drums and bass perfectly pounding out each word till the guitar enters wham, no, harr! on the word lies. It just thundered from there, with the three cuts on side two, ‘Spreading Words’, ‘Sunburn’, & ‘Let Them Come Across,’ easily making this worth the buck for even the laziest of ears (and mailers). Lyrics printed in both English and Espanol (like ‘Mexico/veiled racism/storm the borders/that legalize greed/Don’t label me/no government is mine/I’m a member of humanity’). Forethought: PO Box 880312, San Francisco, CA 94188–0312.

A State of Mind and Chumbawamba: ‘We Are The World?’ This four song EP with 16 page booklet will make you wonder who is State of Mind (from San Fran) and who is Chumbawamba (from England)—but that’s the intention. This record demonstrates how bands work together, making great political music without competitive posing and minus the phony togetherness of celebrity hour crusades. This happens to be the most fierce music and lyrics we’ve received (from outside the Detroit area) in the past year. If there was room we’d print all the lyrics from this blistering female-male, international combination. (Mind, Matter Records, PO Box 421304, San Francisco CA 94142).

Group of Individuals: ‘World Civil War/ Police Beat.’ They sound much like the Jam—like maybe they moved from England to Chicago within the last year. Though this 7” commemorates and captures some real Haymarket ’86 spirit (the defiant lyrical slugging, the solid drive from go to finish), it may bite off more than it can chomp, especially with no less than 15 different organizations targeted for proceeds from sales of the single. Did they cut the record for free? Do they plan on selling more than a few hundred? (The cost of recording and pressing say, a 1000 good but self-produced ’45’s can run well over a grand). Like the whole thing comes off a bit too naive, though there’s still plenty of time to make the reviewer look dumb for underestimating their strong ambitions. (Group of Individuals, PO Box 528200, Chicago, IL 60652 for bulk quantities; single orders from FE Books). —B.B.

The Blanks: What’s this generation coming to? Two songs by the Blanks in which you can hear the lyrics distinctly and the beat is less than 200 mph. Not a bad idea either since this is a band with something to say as well as music to play. ‘Where There’s Smoke’ is done by the group’s latest incarnation and is part of their involvement in the fight against Detroit’s deadly trash incinerator: ‘Liars ride/In limousines/Watch them hide/Behind smokescreens/For the experts were paid/To present their lies/While the mayor made/His apartheid ties.’ The A side, by the ‘old’ Blanks, ‘Say Can You See’ hits its stride as an antimacho, anti-militarist jam: ‘You can’t get a girl/Can’t even make the football team/But you could be first string/In camouflage green.’ An exciting band, too, because their eyes are on the community they live in and not on the record contract. Available through FE Books or write the Blanks direct at Box 1010, Birmingham, MI 48012.

A recent sign of increased interest in anti-authoritarian ideas seems evident here in the steady growth we are experiencing in the numbers of subscriptions, book orders and donations. We appreciate all of your interest and support—with special thanks for the latter. One problem with the sudden surge in book orders, however, is that we have been running out of some of our titles faster than we can re-order them. So, if you have an outstanding order for books, we hope you will be patient and we will send them out as soon as they arrive. 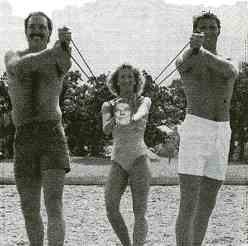 The lethal potential of The Winger (pictured here) is barely disguised behind the smiling young yuppies having fun at the beach. This gadget is essentially a giant slingshot whose projectiles, the manufacturer warns, leave its cradle at an astonishing 240 mph. Although the device is designed to launch water balloons, it is obvious that the choice of ammunition will be up to the owner.

However, even if one scrupulously follows the instructions to “use only water balloons” and that it “NOT BE AIMED AT OR NEAR PEOPLE” one wonders what the target should be, since you are also warned that even the balloons “can cause serious injury and damage to cars, boats, buildings, etc.” Only speculation can imagine what the “etc.” includes, but if you aren’t satisfied shooting your missiles aimlessly into a lake, what do you do with your Winger? Maybe, short of using it as in our altered graphic (right), it should be turned over for inclusion in one of the Loompanics catalog’s how-to-kill manuals. Total price for The Winger, 12 dozen balloons, and filling attachment is $33.85 from Winger Sports, 1306 W. County Rd., Suite 110, Arden Hills MN. A price list and brochure is also available.