The Annunciation of the Papal Visit to Detroit 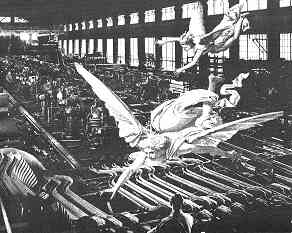 All the city mourns, and the crumpled masses languish at the gates, and the cry of all the freeways has gone up.

The politicians have sent their runners to the waters, but they have come with all their vessels empty.

The limousines fester in long lines like links of meat waiting to be roasted in the devil’s barbecue.

The ground is broken and darkly stained with blood, and an ashen rain falls down along the straits where two gasping lakes lie exhausted.

And the proletarians cover their heads, throwing their useless tools to an oil-spattered concrete,

And the animals stand in the high places, snuffing up the wind like anguished dragons, their eyes failing, fleeing the wheeled incense and the pirouetting Saturday night specials of a hardening rain.

And the daughters of the city are on the threshing floors, harvested by gangrened nightshade warriors on gloomy motorcycles.

And the children are devoured by the palsied sorrow in executive suites, the telephones gnaw their parchment bones in the looted supermarkets.

And the heavens and the earth are receding, like the skin of prisoners handcuffed to radiators in the dank basements of justice.

And weary are the sowers and reapers, their seeds scattered in the cornucopic sewage, their crops flattened under a blistered light.

And all the plate glass windows are shattered in a winded frenzy, a final rage rising from the strange flesh drifting down the river.

And the factories give off a strange and giddy hue against the coughing sky.

And the jetset pope, crowned eunuch of the honeyed imposture who blessed the shrapnel as it shredded the children of campesinos,

The contra pope, gowned golem chastising the Nicaraguan mothers for their anger while secretly pawning the relics to pay for poisoned bullets,

The C.I.A. pope, who would not suffer a witch to live and who had the zen lunatics thrown down spiked pits,

The corporate pope, who cut a secret deal with the banks to subdivide and develop nirvana as a judeo-christian theme park

The mafia pope, who arsons the tenements to flush out atheists and to collect the insurance when bingo revenues are down,

The nuclear pope, who exhorts a holy indifference to crush the peasantry with a cosmic boot to punish their low productivity,

The petrochemical pope, who drinks the blood of gypsy children while drawing up plans for a polystyrene cathedral to be melted over the pagan shrines,

The laboratorical pope, who genetically engineers mathematicians to compute the number of angels dancing at the end of the hypodermic needles he uses to inject choirboys with deadly, experimental viruses,

The fast food pope, coming to Detroit to christen the first of a chain of thousands of franchises selling the blood and flesh of Jesus to hungry schoolchildren,

The incinerator pope, who finances the clearcutting of the Amazon to obliterate the Garden of Eden once and for all,

The high tech pope, whose special computer program goes into every Star Wars satellite so that the apocalypse can be videotaped and carried with missionaries into outer space,

The industrial pope, who operates clandestine factories in Asia where vivisection is performed on heretics,

The pharmaceutical pope, who has replaced the opium of the people with phenomenological methadone,

The death squad pope, who burns the rebels with electromagnetic cigarettes in tumescent chapels,

That pious contamination, sweeping down on riveted vampire wings, descends on Detroit!

The word of this Lord, foul oozing disease creeping from the newsprint generations, abandoning the desolate fields long sown with salt, brought notice of his coming to a Jeremiah sleeping by a steam grate downtown as he gnawed a stale slice of bread in a dream.

And the polyester angel, descending from a cadilllac, said unto him: Behold; the Lord shall send the truncheon of his strength out of the holy headquarters.

The Lord maketh the workers and the workless his footstools and his chamberpots, and verily, he shall defecate the beauties of his holiness upon them.

The sacred conspirators shall judge among the heathen, and fill the many places with the dead bodies, spilling the blood of the nations,

The robed representative shalt defend the boardroom door, stilling the riotous, driving back the Jordan of revolt, and making the barren women to keep house and to mother man’s many children.

The jeweled judge shall travel the glass-strewn streets, and motorcade the murmurers deeper into the dunghill, and reward his loyal servants with stocks and bonds, and wealth and riches shall be in his house, for his investments endureth forever.

And he shall sit with princes over businessmen’s luncheons and martini blueprints for robotic seminaries.

And he shall raise his cup of salvation before the disobedient, cursing the festivals of the oppressed for precious in the eyes of the Lords is their slaughter.

And he shall bless the terminals as they chatter out the interest rates, as the spreading nets gather in the frightened birds.

And he shall bless the cameras as they send his spirit out from the Silverdome to deceive the nations which are in the four corners of the earth, Gog and Magog, to gather them together to battle.

And he who heard this angers tiding raised himself, trembling fearfully in his broken down boots, remembering when he dreamed of this, and said he unto the angel:

You hypocrites, who have come to the frozen nakedness of a stricken city, with famine sore in the land;

You who have driven the corn maiden and the coyote and the wolf and the beaver from these lands,

You who contracted the cement companies to bury our Mother in this rock upon which you found your church,

You who turned a place of godless pleasures into ashes to make of it an example unto those who would dare live for pleasure,

You who razed the sacred groves to manufacture toothpicks for the magnates after they feasted on the wretched,

You who teach a bloodless love, that true carnal love wither and die on the vine,

Only pleasure, only liberty, only irreverence, only animal energy can keep your servitude and mortification away,

Only a wilder festival than all that came before will make your master hesitate and turn back, beneath his robes.

Now the time for the Commune, for the corn ceremonies, for the beavers and coyotes.

Let your everlasting chains be rent asunder, let the cities give themselves over to fornication, let them exalt the flesh, despise dominion and speak evil of the dignitaries.

Raising a fist, said he unto the angel: To he that cometh, let them hurl a white stone against his windshield,

Let them eat of the hidden manna, opening the storehouses and flinging the goods therein down among the poor,

Let them drive all pharaohs and their guardians away, sowing the land with a mad and defiant herb,

Let them plunge deeper into their bodies to find their souls, let them mock his prayerful supplications with an impenitent hymn,

Let them love the world which is the only world they have, the world and all its creatures, let them hurt not the grass of the earth nor any green thing, neither any tree, but only those who would bar them from the gates of Eden,

And let them flee into the wilderness, drawing it out of themselves as the child from the mother’s womb,

Let them smash the tabernacles of the iron patriarch, driving the black robes and the pinstriped three-pieces and the uniforms away,

And awoke he, Jeremiah, in the cold of a February morn, and he went among the tumult of the rush hour and the harried workers to panhandle dreams.

—T. Fulano, February 1987, on the announcement of the papal visit to Detroit for September 1987