Editor’s note: The following is printed exactly as it was released by the City of Detroit, Department Report and Information Committee.

Movie goers who once marveled at the disguises of Lon Chaney would be amazed at the many “faces” of Detroit police department detectives. 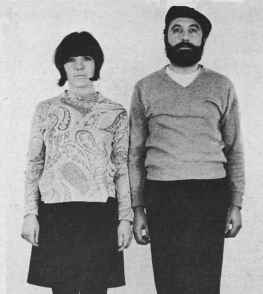 Police Commissioner Ray Girardin revealed today that policemen in their efforts to catch suspects in the act of committing a crime often turns to a variety of disguises.

“They are usually successful,” said Girardin.

Recently two officers -a policeman from the narcotics bureau and a policewoman—disguised themselves as “beatniks” to gain the confidence of various people suspected of illicit sale and use of narcotics.

Their masquerade was convincing enough to enable them to make purchases of marijuana and effect arrests of members of a large narcotics ring.

The use of disguises generally is acceptable, he explained, saying: “If a masquerade is straight-forward, it isn’t a legal problem.”

He told of the various methods by which policemen can change their features, their dialect and their clothes.

“You’ve read advertisements saying ‘clothes make the man’ and policemen will attest to this statement,” said Hunn. “Altering clothing, plus being a good actor, gives a completely different appearance.”

Catching a crook in the act has advantages and disadvantages.

One detective, now retired, used to go on tough cases wearing a raincoat and boots and carrying an umbrella, which he would never take off—no matter how hot it was. He was quite successful because he was considered so eccentric no one would suspect he was a policeman.”

In answer to those who contend a uniformed policeman would be as effective in deterring crime as one in disguise, Inspector Theodore Sienski of the robbery, breaking and entering bureau, said, “The ideal situation would be to have enough policemen to put one in front of every bank, but due to the shortage of manpower, we are resorting to special burglar alarm systems in order to trap criminals.”

Meanwhile, in Detroit you are likely to find that a motorcyclist in Rouge Park, a swimmer at the Belle Isle beach, a shopper pushing a shopping cart through the supermarket, or a traveler waiting for a bus at the Greyhound Bus terminal ... is a Detroit policeman or policewoman in disguise.

“As the criminal changes his appearance and tactics, so must law enforcement change,” explained Commissioner Girardin adding “Disguises are almost ‘a must’ in the vice and narcotics bureaus.

Inspector William Hunn, head of the vice bureau, sometimes poses as a customer or part of the crowd and has been “arrested” and placed in the show up line with criminals in order to obtain evidence.

“Some of our detectives are so good at disguising themselves that I sometimes have to look twice to recognize them, though I see them every day,” he said.

“We must be extremely careful, since civil liberty groups are quick to challenge any police tactic that has the earmarks of entrapment.”