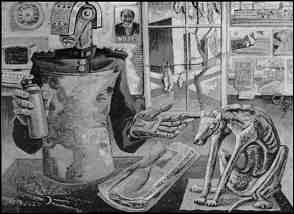 I conceived of “His-story Lesson” as being like a little lecture, demonstrating the development that can be observed as a central tendency, throughout all of human history. Our lecturer is holding his spray can, which is a symbol of hostile technology: it could be destroying the ozone layer or it could be for graffiti, or it could be poison, some toxic substance, it could be mace, whatever comes in a can, it could be hairspray or some hideous perfume out of the drugstore. He’s wrapped in a map of the world to emphasize the essential underpinning of human development and progress on this planet which has always been conquest and domination...in effect colonialism, colonial expansion. Up on the wall to the right you have the factory system, you have the pyramids which represent the ancient bureaucratic state, you have some other little motifs which have to do with the pillars of society—the judiciary, the church and so on. To the left of the lecturer is Roman time, symbolized by a clock with no hands, and below it is our lethal contemporary obsession with cybernetic time and the so-called information revolution which is nothing but an insane and obnoxious plot to fill up all us empty vessels—apparently we’re all empty vessels to be filled up with all this worthless bullshit that technocratic civilization deems purposeful, which I reject out of hand.

The starved dog is representative of the impoverished masses, obedient, subservient, always willing to sit there and listen to “His Master’s Voice”. Also on the wall, by the side of the window, is an electioneering poster, which to me sums up the absurd, crass, pathetic and spectacularly illusionistic nature of parliamentary democracy, which over the contemporary historical era has led us deeper and deeper into this hideous malaise in which we find ourselves. Because everyone is more or less willing to abdicate their own self powers so that an elected representative can go back and allegedly do their bidding. I’m saying that the next time some politician says vote for me, you say, no, we must direct our own destiny, because all the way down the line you have used us to maintain your own power, and this is not going to change, in my opinion.

There’s no way anybody can ever bring solutions to us on a plate through the bourgeois parliamentary structure, it doesn’t work. If you look at the newspaper (in this painting) you’ll see a reference to Soviet Russia, something like “Gulag Vacations,” and then a headline which says “Capital Gains—You Lose.”

So that’s the story on “His-story Lesson,” and it’s “his” because it’s patriarchal. One other thing, the hideous lecturer is suspended above the vault of the heavens. This refers to the monstrous arrogance of our technocrats who presume not only to know the contents of space but to own it as well. What I’m saying is that this idea is so toxic that it has to manifest itself in a physically toxic way, which militarized, industrialized, bureaucratic, capitalist civilization does with a vengeance.