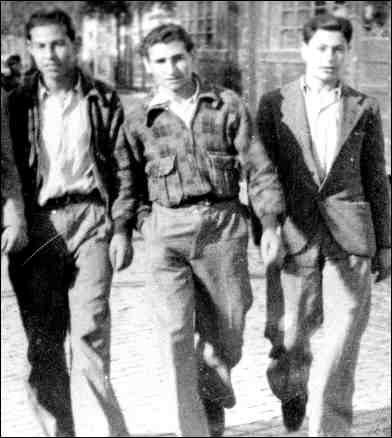 Members of the anarchist group The Quijotes of the Ideal, Barcelona, 1937

On July 17, 1936, Spanish nationalist forces, led by right-wing General Francisco Franco attempted a coup d’etat against the newly-elected popular front Republic. In the context of the social and political upheaval following the mass based resistance to the fascist uprising, the anarchist movement in Spain organized the strongest and most radical opposition to fascism as well as a far-reaching social revolution.

Throughout the next three years, libertarian and anti-authoritarian ideals of anarchy became the daily reality for millions of Spaniards who took control of their workplaces and communities, throwing off the bureaucratic and repressive domination of government.

Although this experiment in revolution was ultimately destroyed by a treacherous combination of fascism, Stalinism, the Western “democracies” and betrayal by the liberal Spanish government, it was, according to David Porter (see FE #323, Summer 1986), the “largest-scale and most intense testing place of the relevance and strength of anarchist ideas in the modern world.” And, they worked.

The following tract was written and distributed in Spain in 1937 by an anarchist youth group of 15- to 17-year-olds called Quijotes del Ideal. The text was given to us by a friend and comrade of ours who participated in Los Quijotes. and who, after the passage of more than fifty years, still retains his zeal for the ideals of anarchy expressed in this document. It is written in the revolutionary spirit of the time, directing its voice to the people, denying the legitimacy of all governments and laws, and pointing to the Spanish Republic’s betrayal of the revolution as blatant proof of that government’s enmity toward the people.

We direct ourselves to you, the people. To you, because we are your children and because it is you who, as always, they [the government authorities] seek to deceive.

We are young libertarians who, in honor to our name, “The Quijotes,” will cross swords with those who seek to build up our tyrants first through deceptive discourse and then through force of arms in the power of the military and police forces at their command; and we will cross swords with those who, in collaborating with the state, call themselves anarchists even knowing that Anarchy means the negation of government and laws. [1]

Naively we have waited to see if, for the first time in history, a government would stop being tyrannical and would exercise its politics to work for the good of the people. But, seeing the advance of reformism and the betrayal of the revolution, we say: enough; and we will resist this with all our strength.

And don’t dismiss us by calling us uncontrollables or fascists. What controls us more than the government that is controlled by no one is the immense love that we feel for the people. As to fascists, they are the government officials, not us.

All states, with no exception, impose themselves, oppress and enslave the people; although they [state bureaucrats here in Spain] in turn are also all slaves, consciously or unconsciously, of an organization of vagrants and hoodlums called: The Order of Jesuits. [2]

Some of the ministers of the government of the Republic are millionaires: They, along with fascist millionaires, hold millions in the same London bank; therefore, the interests of the one and the other are the same. The proletarian world revolution would dissolve that bank and those interests.

So it is evident that what is important to all of them is to shatter the Revolution that threatens them and to destroy the revolutionary workers in a forceful war.

People: Think without any of the trappings of fanaticism which blind your eyes.

A certain minister of “the people” already demonstrated a few days ago that once “this” is over, the Spanish Republic will surely conserve the political forms that it had before the Revolution.

A “worker” minister permits jails and penitentiaries to remain standing and in addition creates concentration camps at the same time that he shouts: “Down with fascism!”

And another goes around speaking at bull rings about nationalistic and patriotic anarchism, while at the same time an old Catalan politician orders the people to be quiet and blindly obey the government.

Why say more? Anarchists do not, have not and will never collaborate with any government. Send out warnings to the people everywhere so that they will not allow themselves to be deceived like eternal children, so that they break with that old putrid show in order to make way for the full beautiful light of the Sun of Anarchy.

For our part, we are ready to sacrifice our very lives.

But we will die in dignity comrades, shouting strongly “down with Government! Long Live Anarchy!”

The anarchist group The Quijotes of the Ideal

1. Several “leading comrades” of the anarcho-syndicalist union, the CNT, took posts in the liberal Republican government in a vain attempt to secure an end to the discrimination against the Revolution’s accomplishments. Their “experiment” was a failure and this violation of anarchist principles caused dismay and further discouragement in an already disintegrating situation.

2. This paragraph speaks to the overwhelmingly reactionary role the Catholic Church played in Spanish society and the hatred the common people had for its organizations.