In a rite of spring, a festive gathering of zeks celebrated the biosphere—that fine layer of rust that covers the earth which gives and supports life. This rite was bizarre because it wasn’t happening around the wild fruit trees or among the paw and hoof prints of the wolf, brown bear and white-tailed deer, but in the land which did once support these sisters but now is transformed into the great Babylonian city of Detroit. It was also bizarre for it was a rite of de-structuring of this city’s greatest idol, its golden calf of black hooves which travels at incredible speeds. It was the rite called “Death of the Car.”

The celebrants searched for a sacrificial lamb to “bash,” but the elusive auto beast was never secured mainly because of the incompetence of the zeks in finding their victim. But it was all for the best, for they laughed at themselves and were aware that they didn’t function like a well-oiled machine as did their intended sacrifice.

This rabble, with much noise from the banging of instruments, moved into the artificial canyon formed by the gigantic ziggurats of GM and Fisher, the former being the creative spirit of the celebrants’ lost victim. These ziggurats were covered with many glass eyes, behind some of which were “showcases” of brand new golden calves. They were given extraordinary care, kept warm in winter and cooled in summer while cop-bots protected them all the whole year (as opposed to the zeks called “homeless”).

Even though a car was not killed, a eulogy was read for one by a celebrant:

Only within a system that places no value on human life, that does not understand the value except in dollars and cents, would this intolerable situation continue. It is not possible under capitalism to have a bioregional, community-based, decentralized and human-scale society. It is not possible to live in harmony with each other and the Earth under a system that demands competition and exploitation. We must distrust the realism that has given us the nuclear bomb, pollution and class society. We must trust our imagination and our utopian dream as necessary for our survival.

After the eulogy, icons of exchange bearing the eye-in-the-pyramid were burned much to the amazement of the cop-bots looking on. Also, the symbol of life, the egg, was thrown at the GM ziggurat in hopes of bringing it down.

Finally, the celebrants broke into the sacred temple of GM uttering the holy Chant, “LESGOSHOPPING!” This action activated the cop-bots to commence their pre-recorded message: “Not Allowed...Not Allowed...Not Allowed...” which in turn encouraged the rabble to bring out other icons of exchange bearing symbols of lincoln and jackson, hoping to confuse the guards with a different prerecorded stimulus. This only activated a slightly more intelligent cop-bot to pronounce “private property...must leave, must leave.”

The executives of GM have assured the public that this incident will not reoccur, for they said, “We are speeding up the assembly lines so the workers will have tools in their hands from now on instead of idle time.” 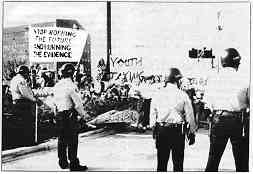 Face-to-face with Minneapolis cops at the Twin Cities’ incinerator.

On April 23, four hundred people converged on downtown Minneapolis to demand that the Hennepin County garbage incinerator be closed. With chants of “shut it down” and “reduce, reuse, recycle, revolt,” people blockaded the entrance to the $108 million burner, and tied up rush-hour traffic.

Police began arresting perceived leaders of the gathering, attacking with riot sticks and strangle holds. One group of wimmin engaging in a dis-arrest had a gun pulled on them by a cop. Tense moments were smoothed out by drumming and dancing as the entrance-way was occupied by people demanding recycling, and an end to the carcinogenic processing of waste.

When the gathering began moving toward the center of the business district, police maced and clubbed anyone they claimed they saw spraypainting, speaking or protecting each other from arrest. No one sustained serious injuries, but police claimed they and pedestrians were hit by rocks. A total of 26 people were arrested.

At the beginning of the march a womyn from the Greens spoke to the crowd about incineration and its effects. Larry Cloud Morgan burned sage and spoke of respect for the earth, and the generations to come. Two members of the Revolutionary Anarchist Bowling League also spoke, encouraging the crowd to take inspiration from actions that have taken place around the world in the past year.

This demonstration was also organized by Tornado Warning, a wimmin’s anti-authoritarian group, which was often at the front of the action, and received the brunt of the police violence.