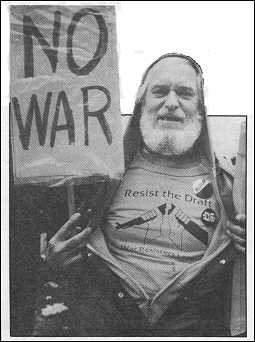 This issue of the FE is dedicated to Victor Schumacher, a mainstay of the Detroit antiwar movement and activist community, who was killed by a car late in January during his morning jog. Vic was a pacifist and a member of the War Resisters League whose resistance to militarism dated back to the time he spent in prison for refusing to serve in the U.S. armed forces during World War II. Vic refused to do alternative service as well. While working in a New York hospital tending many war victims, he saw wards cleared of war wounded for security reasons so that Madame Chiang Kai-Shek, the wife of the Chinese Nationalist dictator, could have cosmetic surgery. Seeing the soldiers lying in gurneys in the hallways to make room for the privileged, he vowed to resist the system of injustice in every way he could.

Vic kept his vow. He could always be found at anti-war demonstrations, anti-incinerator demos, and other actions in the city. He particularly enjoyed speaking to young people about war resistance, and participated in many high school seminars on conscientious objection, militarism and related issues. A number of people in our community remember him speaking to them as high school students. Vic liked to explain how a teacher had played a role in radicalizing him.

Vic was also active in the Woodbridge district, a community just west of the FE office, and was one of the first subscribers to the FE back in 1965. We frequently disagreed with one another, but we considered him a friend and appreciated his presence in the community.

So it was unspeakably saddening, infuriating to hear of his death, as the war was raging. Some of us had just seen him at a meeting to discuss an action at the Federal Building a few days before. His death was a terrible, senseless loss.

It is in Vic’s memory that we renew our efforts to free the planet of slavery, oppression and military madness.

(Thanks to Terasa Cooley for the story about Vic’s experience in the NY hospital. We only heard it after his death.)

As we were completing this issue, the war came to an end. We were certainly fooled—we thought the Iraqi army would stand up much better to the airwar than it did. U.S. intelligence must have known all along they were up against a paper army, and decided to embark on relatively low-risk activities for enormous gain. Others paid the price. The bitter end turned out to be an out-an-out massacre—such as the ruthless butchery on a road along which thousands of disorganized troops were obviously fleeing. Guess the old yellow ribbon, after the veil of duckspeak is torn away, means that two or three thousand “enemies” should die for every precious American.

Another spooky realization—technology really did win this war. If the Vietnamese proved that “the spirit of the people is greater than the Man’s technology,” this war proved what the megamachine can do. It’s an ugly reality. It’s an ugly world, ruled by ugly, evil men. We’re going to have to be shrewd, creative and wise to defeat them. And maybe that won’t even be enough. But what is the alternative? We saw some of our friends, former radicals now duped by the television and conformist ideology, actually renounce their humanity and support the war. (Passively, of course; they didn’t offer their children.) Others went on blandly with daily life as if nothing out of the ordinary was occurring. All depressing and disturbing, but it didn’t keep us from resisting the New World Order if others woke up deciding they love Big Brother. As the song goes, those not busy being born are busy dying. We’re still alive and kicking, and planning more activities for the coming months. Call us at 831–6800 for updates.

The Detroit trash incinerator has been pumping poisons like crazy since given the go-ahead by the state, but it has had its problems, continuing to fail air pollution tests and losing money. Seems it had to borrow $9 million from the City police budget to keep operating. You don’t know whether to laugh or cry....

We didn’t move! Through a layout error, our last issue printed an ancient staff box with a previous address. We belatedly filed a change of address, but learned some people had their mail returned—giving the impression that we had disappeared!

Visitors from Seattle went to the old location only to find a Christian faith healing and drug counseling center; of course, they had never heard of us. The visitors then stumbled upon the local RCP bookstore where they were similarly told that our location was unknown (liars!), but they finally found us through people at a local deli.

Our address is correct in this issue, as is our p.o. box number. Mail may be sent to either, but the box is too small so visitors should come to our office.

No, we still don’t have a computer, but computerization is creeping in as our mechanical equipment wears out and we can’t repair it. Actually proves our point that totalitarian tech tends to colonize and undermine independent alternatives. Friends now send finished copy and some is being typeset on the job. Hard to believe that some tout computers as “liberatory”...A computerized world is a prison.