Hello, and welcome to another issue of the Fifth Estate, our Summer edition 1991, Vol. 26, No. 2, total number, 337. Fortunately, our basement office provided us with a cool respite from the blistering heat we’ve experienced in this part of the country, so we have no tales of martyrdom to relate.

As usual, our gratitude to all of you who constitute the community of support for our project through your subscriptions, donations and book purchases. It is your generosity and consistency which allows us to keep publishing and to maintain a public office which functions as one of the centers of libertarian activity in Detroit (see below for the other).

As you may be able to detect, we have come no closer to resolving our quandary about typesetting equipment. Most of this issue was set on our 25-year old IBM Selectric Composer, with a bit done on a computer through stolen time at work. The heads were composed on a Macintosh using an Aldus Page Maker program and a laser printer.

Our Compuwriter Jr. is still broken, in need of a $500 (!) part, plus labor, but given its obsolete character, it seems foolish to fix it with no guarantee something similar won’t occur the next day.

Computers for typesetting loom ever closer in our future, but still none of us want to take the leap. We’ll see.

A new performance space has been set up in Detroit’s Cass Corridor area, located at 404 W. Willis (between Cass and Second). The venue will cater punk, folk, film, poetry and performance as well as a center for political events such as the recent Festival Against Wealth and Waste. Racist, sexist or homophobic bands will not be booked and similar attitudes on the part of people attending events are not welcome.

The space is run by a collective of volunteers, and is therefore non-profit. A number of events have already occurred, and meetings and vegetarian meals are held every Sunday evening. All are welcome! For info or booking, contact Greg at (313) 831–3637.

Imperial Victory, Culinary Dept.: A suburban Detroit eatery, The Buggyworks, recently added a new item to their menu: “The General Schwartzkopf Burger,” described as “10 ounces of hamburger topped with (what else?) American cheese.” A small U.S. flag adorns the listing. But retch not. As usual, nature bats last, so the hungry patriots who feast on this fat and cholesterol laden burger will get their payback in the years to come.

Michigan’s defeated Democratic governor James Blanchard ended his worthless and opportunist terms in office with a final act of crass insensitivity. It is traditional for exiting governors to grant clemency or pardons to deserving prisoners and much was made of the adjoining state of Ohio’s chief executive Richard Celeste’s pardon of 25 women who had killed their husbands after having been subjected to long-term abuse. Blanchard chose instead to grant clemency to only men, including one who had shot his pregnant girlfriend six times, and to two trigger-men in a kill-for-pay scheme which left the women who had hired them serving a life sentence. Ol’ Jaimie, who had his eyes on the presidency, still can’t figure out why he is so roundly despised.

Look out! There are moves afoot to destroy what is left of the natural sections of Belle Isle, Detroit’s island park. Proposed, but getting no public notice, is a bizarre, multi-million dollar scheme to alter the tranquillity and isolation of the far east point of the island with riding stables, a marina, a restaurant and a hunt club! A hunt club in a park which has been the recreation and swimming respite for generations of working class people?

Two shadowy entrepreneurs are asking the City to cede them public land so they can create a multi-building, multi-acre “equine” complex. They speak wistfully about providing the same riding opportunities for inner-city youth which are available to their wealthier suburban counterparts.

The section of the island they want to despoil is a migratory rest-stop for northern waterfowl and songbirds, part of an important link in the birds’ thousand mile journey each year. It also contains endangered floral species, but if you object to their mega-project you are apt to be denounced as an elitist or racist.

What crap! These creeps give anti-racism a bad name. What lurks behind their tender concern for black youth is the money they intend to rake in. No one seriously believes that an increasingly impoverished city can sustain a private club; nor would they be able to get away with taking public land without a legal battle. All the “horsey” stuff is probably just a stalking horse for what they really want—a concession for the money-making restaurant and marina. And who will be the clients of those establishments?

Horseback riding for a handful of inner city kids reminds us of the pre-French Revolution idea that cake should be thrown to the starving. Surely we can find better ways to help youth—like preserving and expanding what few green areas are left in the city, and showing kids their relationship with the other life forms which share the planet with us.

Whatever these hustlers may use as justification for their schemes, there will be no development on the point! 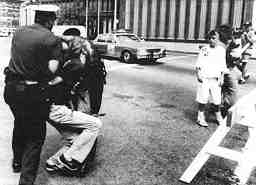 Democracy in action at the Detroit Gulf War “Victory” parade, June 29. At one point, the cops went beserk with patriotic fervor and busted one protester’s wrist so badly, a bone graft was needed.

Detroit hosted what the anti-war movement dubbed “The Parade of Shame” on June 29, to celebrate the “U.S. victory in the Persian Gulf.” The pro-war march was held despite attempts by liberal peace groups to lobby the city to cancel it and despite the appearance of extensive anti-march graffiti along the parade route.

The procession of soldiers, military vehicles, and marching bands was met by an estimated 100 to 200 protesters at the downtown Kennedy Square. Although there were a variety of groups and individuals present, the Revolutionary Workers League groupuscule attracted the most attention and hostility from onlookers with their empty chants of “We Defend Iraq!” Several protesters jumped on one of the lead vehicles, but were attacked by the police and an enraged citizen. The cops roughed up the demonstrators, breaking the wrist of one, and arrested them for “obstructing a procession,” which continued on to a surprisingly low turnout.