Attendance at the 2nd Detroit Triple Fan Fair the weekend of June 17 and 18 peaked at approximately 150 and audience enthusiasm burned with a hard, gem-like flame, despite program changes and setbacks. 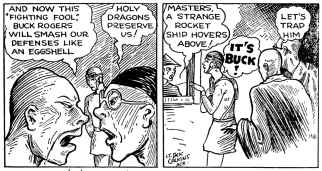 Buck Rogers comics were among many at convention

Ken Muse, whose “Way Out” appears in the Detroit News, led off the Convention with an informal, pleasantly gossipy talk about his fellow cartoonists, and cartoon biz in general. Although the comic section no longer has the expansive layout it once had, it is still a substantial factor in newspaper sales—a $40,000 budget to promote a new strip is not uncommon. Muse pointed out that comic books, no doubt spearheaded by writer Stan Lee and the unstoppable Jack Kirby of the Marvel Comics Group, have made a creative comeback and are again rivaling comic strips in creative graphics, mass readership and profits.

During the question and answer period Mr. Muse remarked that he himself draws constant inspiration from the unintentional absurdities of the National Enquirer (“She Fed her Baby to the Pigs!” etc.), and when asked if he knew of any universal characteristic among comic artists, he replied facetiously that everyone he knows well (including himself) has suffered a head injury during his formative years.

The previously scheduled “Lost City” serial proved unobtainable and a soporific Republic TV serial, “Dr. Fu Manchu, Inc.” was shown instead. By episode 97, I began to experience symptoms of locomotor ataxia. I roused my wife and we adjourned to an adjacent room where we goggled at various quantities and qualities of amateur films, and then saw the great 1919 German classic “The Cabinet of Dr. Caligari,” which most film nuts like myself have seen umpteen thousand times. This was the worst print yet—flare-outs, pulsating light, faces almost blanked out, backgrounds twitching black smears, yet still hypnotic, compelling, fresh. The U.S. remake in 1962 was an insult to the eye.

Convention chairman Marvin Giles, at 43 a kindly father-figure in local fandom, spoke of his vast private collection of fantasy and comic art. Begun in the 1920s, his collection is one of the world’s largest, and numbers something like 55,000 items; the post office delivers his daily mail by truck. His wife must be even more indulgent than mine. His speech, “The Tree of Fantasy” delineated multitudinous branches of imaginative literature and a detailed outline of science fiction history.

He explained how current SF has been exploring the inner worlds of behavioral psychology and sociology as well as reviving the old “tales of wonder” genre and, since Ray Bradbury, has begun to merge with mainstream literature as well as with popular media (Brave New World, 1984, Star Trek, Fahrenheit 451, Fantastic Voyage, Kubrick’s “Space Odyssey 2001”).

Between each of the weekend events, most of us adjourned to the ballroom, where comic book, fanzine, film and SF dealers were displaying their wares. I pawed over musty back issues of old comic books, staple-riddled old film posters, crumbling and yellowed pulp magazines, chunky Big Little Books, and attempted to ingratiate myself with various editor-dealers for free review copies of their fanzines. Tom Altshuler, committee chairman and owner of Able-Man’s Book Store in Hamtramck (where you get all kinds of Good Stuff) brought enough material for a separate convention.

I spoke with the editors of two different Chicago fanzines and with the owner of a Dearborn Heights SF bookstore, with Edwin Aprill, a genial Ann Arbor teacher-artist who has been reprinting many rare and wonderful early newspaper comics, with Rich Buckler, committee ad artist and superhero cover artist for practically every comic zine I see. Jerry Bails, a WSU instructor and one of the founding fathers of comic fandom was present but unavailable.

He illustrated his talk with rubber models he made himself. When a film calls for model animation the animator creates a small model in clay, then covers it with plaster of Paris for a mold, which he then fills With a secret latex rubber (every animator has his own secret formula). Jointed skeletons are then inserted into the body, seams and flaws are smoothed out, and the model’s feet are anchored on the animation set, which may have a background projected from behind through a translucent screen, or from a front projector which bypasses the model via angled mirrors. The models are then moved and photographed one frame at a time, with a special camera. Model animation is extremely difficult to do well, and has had only 3 master-craftsmen in the U.S.: Willis O’Brien, George Pal, and Roy Harryhausen.

Another major event was the showing of the late Willis O’Brien’s 1925 film of Sir Arthur Conan Doyle’s The Lost World, introduced by Dennis Kawicki, the owner of the film, who mounted the podium attired in a World War I uniform, flowing silk scarf and plastic Luger. I began to wonder at Rich Buckler’s admonition to me earlier not to bring any Weirdoes to the Con, but Dennis quickly explained all: he was dressed as The Red Baron for the Costume Ball (as he was the only Masquer, the Ball never materialized).

The weekend finished on a rousing note with the showing of the feature version of the “Adventures Of Captain Marvel” serial. Holy Moly! What stunts! What steel fists breaking jaws left and right! Even though Captain’s origin and purpose was changed and the film lacked the whimsy and charm of the comic book original, it achieved serial perfection. It was released by Republic during the ‘40s, and stands today head and shoulders above all the other tripe Republic has been flinging in the public’s face over the years.

The late Tom Tyler (who also played The Phantom in another serial) was a perfect Captain Marvel. His straight performance had none of the clumsy oafishness exhibited by his fellow caged crusaders, and he and his stunt man performed some of the greatest action sequences ever seen. The audience (including me) utterly lost their composure after about 20 minutes, and applauded, laughed joyfully, and even cheered as the mighty Capt. threw automobiles and villains around like feathers and ultimately unmasked the dread Scorpion.

The film was such a hit that Bob Brosch, the Fair’s Co-Chairman and serial enthusiast, and most of the audience, decided to run the whole thing all over again.

I vaguely recall my wife steering me home beneath a groaning armload of fanzines and goodies, dropping my bloodshot eyes into a glass of Murine, and pouring me into bed, while visions of superheroes danced thru my head.