Some 200 local residents turned out to show their opposition to the Detroit incinerator and the ongoing destruction of planetary life systems in early June. Following a dormant phase, this demonstration did much to clear away a pall hanging over our community since the incinerator restarted in 1990 and the Gulf War damaged our spirit.

Taking the street near Detroit’s Eastern Market and parading up Russell to the incinerator, participants carried enormous puppets and wore stunning masks and costumes, accompanied by a contingent of boisterous, barking mud people. It took ten marchers to lower the 25-foot -tall Earth Mother puppet beneath each set of electrical wires in her path. And though this drew reprimands from the cops, who threatened to ticket the demonstrators for marching without a permit, the parade would not be stopped. No tickets were issued and no arrests were made.

The marchers were greeted with refreshments at the site by a group of supportive residents from directly around the incinerator. And the entire event ended with singing and a great puppet circle dance around our Earth Mother.(See accompanying photos.)

The incinerator(the largest of its kind in the world, located in a poor minority neighborhood in the center of the city)continues to operate despite more grossly failed toxic emissions tests. Other ominous occurrences indicate the threat people living here are under, such as the burning over Memorial Day weekend of strange, noxious materials, The ash that carpeted lawns and streets as a result, was swept up the next day by crews of workers who would not identify themselves. The local power structure and the media, with the predictable collusion of so-called regulatory agencies, maintain the information blackout on the incinerator, while its horrible, continuous stench and stack emissions have become a major local public secret.

The small group of people who called the demonstration and who worked long and feverishly to create the beautiful and impressive puppets promise more such actions. A loose “puppet collective” has formed to make more and to use them in future protests and celebrations, including an anti-Columbus theater event planned for October 12.

They have no phone, but the FE will be glad to pass along inquiries, communations and donations to them (make checks to the FE). 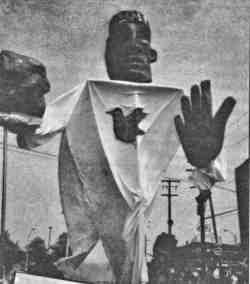 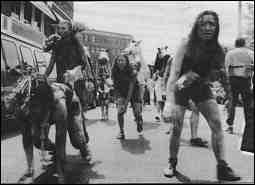 “In the incinerator’s plume and ashes are the remnants of clear-cut forests, oils and metals mined from places once sustaining human and animal communities, now left ripped open, hollowed out, laid bare and contaminated in the process. All to manufacture a glut of products we do not need, producing mountains of trash we cannot ‘manage.’ All for the maintenance of an economy powered by greed, which sees all life as a ‘market resource’ and whose primary export is its own waste.”