The Wreck of Columbus Day 1992

Welcome to the Spring 1993 edition of the Fifth Estate. Our promise of a third issue for 1992 never materialized, so you are reading the edition which follows our Fall 1992 publication. Subscribers receive four issues even if the period extends beyond a calendar year, so fear not if we don’t produce the expected annual number. You can check whether you are receiving sequential issues by looking at the total number of issues printed since our founding in 1965. This issue is #341 and Fall’s was #340.

Speaking of our founding, we have unceremoniously slipped into our 28th year of publication, with November 19 being our official anniversary date. Thankfully, our infrequent publishing schedule does not reflect the reality of our situation. The paper is in a strong position with a stable staff, expanding subscriptions and news stand sales and adequate finances thanks to the amazing generosity of our Sustainers and readers. We thank all of you warmly for your support and mutual aid and, although it comes a little late, we wish you a wild New Year in which our projects and dreams come closer to reality.

Eighteen years after a lawsuit was begun against the Detroit Police Red Squad, its final disposition came to a quiet end in November when the presiding judge in the case ordered a half-million illegally acquired files to be stored in the Detroit Public Library. This was a victory for the plaintiffs since the mayor and a court-appointed commission had recommended the police surveillance files be destroyed.

The cops were ordered by the court to stop spying on radical and other dissidents in 1974 after local activists including this newspaper sued the city. Between the 1930s and 1974 the cops collected information on 1.5 million people. Through a court mandated program in 1990, copies of many of the files were distributed to those who were spied upon.

The original files will go to the archives of the Burton Historical Collection at the Library and under the court order will be closed to the public for 25 years. However, individuals will have access to their files under procedures not yet worked out. It is also unclear as to whether researchers and authors will be able to view the sequestered files.

It was a long, hard struggle and the diligent lawyers for the plaintiffs deserve a hearty thanks. Still, no one believes the cops have been “reformed” or political surveillance no longer occurs. They’re just a little more selective now.

Signs of the Times: The Detroit Police announced amidst the worst storm of the winter that they will no longer allow poor people to stand at freeway ramps holding signs which solicit work or food. Liberals are indignant and say they will fight to protect the rights of the homeless to beg.

Also, a 29-year-old mother was charged with attempted murder for leaving her newborn baby in a plastic grocery bag outside on her porch in freezing weather. The woman told the court, “I don’t know how to put him up for adoption; I don’t have a job or any money.” The presiding judge called the mother’s desperate act “a horrendous offense” and jailed her in lieu of $150,000 bond. The judge then consumed a $50 lunch at a nearby posh eatery.

The comfortable middle-class was further shocked in February by the actions of their lower brethren when a tragic fire swept through a dilapidated house on Detroit’s east side killing seven young children. Tongues were clucked all over the suburbs when it was learned that anti-crime bars had trapped the fleeing children who had been left “home alone,” as the current fashionable phrase goes.

What is conveniently forgotten is that this wasn’t a “tragedy,” but that fire deaths are another condition of poverty. The father inadvertently started the fire trying to heat frozen water pipes and then left to find some salvaged metal to sell, unaware of the blaze he had begun. To cover the larger crimes of this society, the parents have been charged with criminal neglect of their children, thus avoiding placing the blame where it belongs--on the slumlord, the banker and city which refuses to enforce its building codes. Let the grieving parents alone and jail the mayor!

Again, we’ve reprinted the Fifth Estate Earth Day Special which first appeared in Spring 1990. It may be a little late for this year’s festivities, but it is a good general piece to use as an introduction to Fifth Estate perspectives. A copy will be included with most book orders free or will be sent for $.75 postage. Bulk orders can be sent for $3 for ten, $5 for 30, $7 for 50, $13 for 100.

The Wreck of Columbus Day 1992 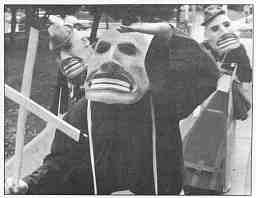 Photo caption: Columbus Day, 1992 was commemorated on the campus of Detroit’s Wayne State University with a reenactment of 500 years of the slaughter and exploitation of native peoples. Friends worked together to build puppet-heads, ships and a big puppet-mountain to illustrate events from the European invasion. Above, invading missionaries and businessmen first sight land. photo / Michelle Martin

Planned celebrations for the 500-year anniversary of the Columbus voyages were canceled wholesale as the world increasingly recognized the hideous disservice the lost sailor did to half the planet. Here in Detroit, at the 404 venue, a special October 12 anti-Columbus Day program was held to mourn 500 years of genocide and celebrate 500 years of resistance.

A hot political rock band from Indiana, Icemakers of the Revolution had the place jumping after readings from Pissed Off Wimin and T. Fulano of the Fifth Estate staff. Fulano read native accounts of the white invasion from Touch the Earth interspersed with his own poetry including an incredible “Address to the Pope” which brought the house down.

Outside, two jesus freaks began preaching hell-fire and damnation in front of the 404 storefront complete with a ten-foot cross and a sign saying, “Sin” (which we thought was an excellent suggestion). The whole place emptied out to greet them with streams of taunts and much laughter. Someone hung women’s panties and baby clothes on the arms of the cross and couples began rolling around in front of them locked in embraces. Same-sex couples french kissed, leaving the itinerant preachers gaping in disbelief.

When a woman flashed her breasts at them, that was enough and the skygodders hit the road in a panic, probably glad that the forces of Baal hadn’t swallowed them up.

Their hasty retreat made it possible for one heathen to expropriate the sin sign, which then waved over the dance floor for the rest of the evening. It was a small act of revenge for the Arawaks and the other victims of the Columbian legacy.